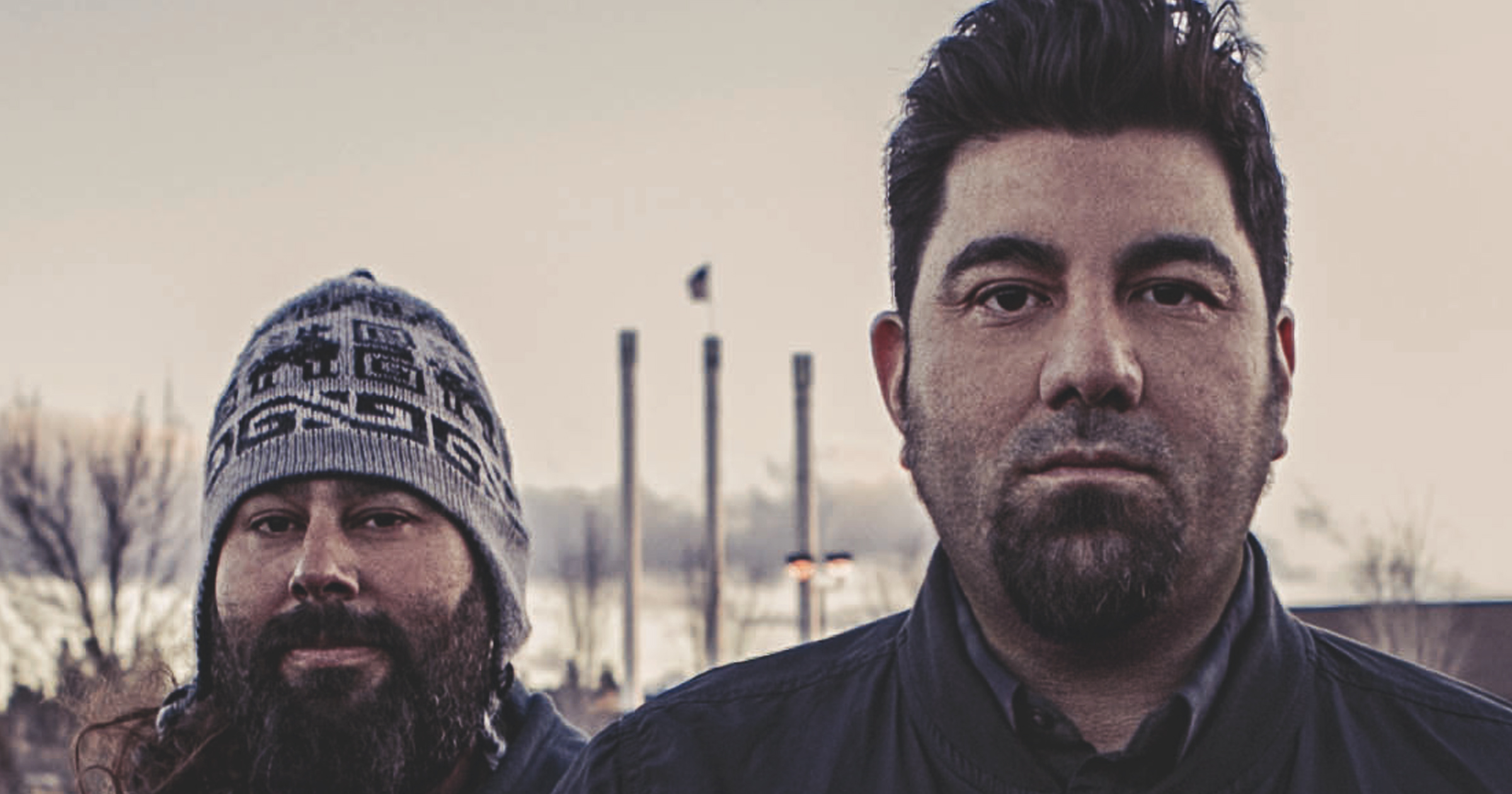 Deftones guitarist Stephen Carpenter outed himself as a flat earther last year, to the shock of some of his fanbase. Carpenter, who has been studying conspiracy theories since the early 90s, was asked if he was a flat-earther. He responded “Absolutely… If you think you live on a spinning, flying space ball, you’re in a cult.”  He elaborated later “The simplest terms for my perspective with flat Earth is simply, I know we’re not on a spinning, flying space ball. Now, what it actually is and all that and, and, and to what depths it goes to, that’s all still to be discovered and people are working on those things." You can read a full recap here.

Frontman Chino Moreno was asked about the comments in an interview with The Peer Pleasure Podcast, and here is his response, transcribed by The PRP:

“I’m surprised he’s not more of a meme… I think there may be a couple. But, it was actually tough for a minute, because obviously I’ve been friends with him since I was 10-years-old. And you know he wasn’t always this way.

I will say that the weed probably has a ‘lil bit to do with his conspiracies and this and that and whatever, because he just, you know… And then probably sitting at home, just looking on whatever sites he looks at. [It] probably doesn’t help being smoked out and all that stuff and whatever.

It’s weird though, when we’re together it’s like we don’t even talk about any of that stuff. We play music, we laugh, we have a blast playing music. [We’re] still friends the way we were when we were kids. But it’s not like I haven’t heard him go on his tangents before and it’s just like I’ll listen for two minutes and then I just can’t, you know what I mean? ‘Cause he’ll just go off into no man’s land.

But yeah it’s kinda tough, because obviously I want to support him—I feel like everybody should have their opinion on certain things here and there, whatever.

I’m not one to say that he’s got to think this way or whatever. I think it’s a little outlandish, some of his views on the world, the planet itself… But I mean you know I fucking love him, man.

He’s a really, really sincere… And he’s smart—which is crazy—he’s very loving. He’s probably one of the most generous people that I’ve ever known in my whole life. From the simplest thing, if has something, you have something and he’s always been like that since we were kids.”

Chino also tried to stick up for Carpenter when the host pointed to "clickbait headlines" that resulted from Carpenter's statements:

“I understand too, that it’s like, yeah you can have your opinion but you gotta know the consequence once you say it. And the consequence is probably gonna be a lot of people talking shit.

Kinda like what I was saying earlier, sometimes it’s like just keep it to yourself, you can believe in whatever—I’m saying for his own good. I’m not saying that he has to keep it to himself because we don’t want to hear it. I’m just saying if you don’t want to get ridiculed sometimes just don’t say some outlandish shit.

But I will say that I don’t think anything that he says is coming from a negative place either. Because he’s like really worried about society… And I think it’s a little bit of paranoia. I don’t want to speak for him, but I do feel like a little bit of it, and like I said earlier maybe the weed doesn’t help with that, but he’s paranoid.

And he has some right to be about certain things. I don’t know if a lot of people know this, but I’ll share this. We were in Paris during the Bataclan attack. And we were scheduled to play at the Bataclan the next night, the next three nights—we were doing three nights there.

And we had flown in a few days earlier and the night that we got there, or the next night that we were there—this is still a night before our show—Eagles Of Death Metal were playing. And Stephen and Juan our band assistant and someone else, I think our guitar tech, they went to the show.

And they were in the audience, they watched probably half the show and I think they decided ‘Alright, lets leave early, go get something to eat’ and they left the show like minutes before the terrorists came in and shot it up.

And I mean… I was at the hotel watching the news, and I saw it go on. And then I started getting calls with everyone calling me from here. Saying ‘what’s going on?, what’s goin on?’… But yo, I could kind of tell he was disturbed by it then, escaping that situation.

But I think like… wow, how close he was to that tragedy. So I know that that’s affected him. So I know certain reasons why he has a little bit of trauma from that. And that’s tough, I couldn’t imagine.

I mean I wasn’t there, but I was gonna be the next night. What if it happened the next night? And my daughter was with me, she was probably 13 or something like that. And my wife, they were with us. If they were there, they would have been on the side of the stage watching the show.

I think about all this stuff and it’s heavy. And I know that I couldn’t imagine being there that night.”

Chino also discussed the Eros album. Deftones were writing and recording a new album called Eros in 2007 and 2008 when unfortunately bassist and vocalist Chi Cheng was involved in a car accident. Eros was never finished, Deftones went on to write and record Diamond Eyes, and Cheng ultimately passed away in 2013.

Deftones released one song from the sessions titled "Smile" in 2014 and would eventually perform the song live for the first time in 2019. Drummer Abe Cunningham also mentioned Eros in 2020, saying the band might eventually release it as an EP. Moreno said Eros is mostly unfinished. Moreno also said he remembers not being too pleased with the album back when it was being recorded and felt the band could've done better.

“There’s maybe like an EP’s worth of music that has vocals on it. The rest of it is like—there’s probably vocals on it—but it’s definitely not finished. It’s probably more like what I was saying earlier, it has melodies and ideas, but no words yet. I was still working on it when Chi had his accident, and we kinda just halted everything. So it’s not finished.

I think there was probably like 12, 11 or 12 songs or something from the session. That specific song “Smile” I had finished, and I actually recorded that vocal at Shaun‘s [Lopez of Crosses, etc.] house. At that point I went through so many different people that I was working on that record with.

Terry [Date] did all the music for it. But that’s when I was still living in Burbank and Shaun was my neighbor, so I just skateboarded over to his house and was like ‘Hey, put this on.’ Because I always love the way he… I love recording vocals with him. And especially I love the way he treats my vocal. And it’s just a very comfortable vocal booth and it’s just a good vibe and he’s really good at… Someone who I can bounce stuff off of.”

…So I finished that song, or finished what it is—I don't think it ever got mixed or mastered. That's like a rough mix from when I left [Shaun's] house that night. But it was the year anniversary of Chi's death. I had found it on my computer maybe a couple days before that and I was like, you know what I'm just gonna, without telling the band, put it out. Literally from my YouTube, I put it up on YouTube that's it.

…I just kinda leaked it out and then I think when people heard that they just assumed ‘oh, well the whole record’s finished, why can’t we hear it?’ But the truth is it’s not. That’s probably the only song that was finished, finished. There’s some others that were close, but honestly I’ve never opened up those files since then, since like 2008. I’ve never opened up that hard drive to see where everything sits.

And in my mind back then, it was like I'm not going to… I mean obviously we hold that stuff pretty sacred, 'cause obviously it's the last thing that Chi played on. But also we were sort of, we were doing "Diamond Eyes" and we were already kind of moving forward. And I didn't want to listen to these songs that we had been working on for the last three… It was so fresh, we were that we were just like moving forward and making music in that moment.

As to where if I put those on, it was gonna take me back to that time, which I didn’t want to be in. And I’m still kind of hesitant to go back and listen. It’s probably why I haven’t opened it up and listened to a lot of it.

And it was actually good time. We were having a really good time when were writing that stuff. We were all getting along so well. We working in Sacramento at our studio and we had finally come out of those dark times, which started with the self-titled album and went pretty much all the way through the Saturday Night Wrist writing and recording and a little bit of the touring. We started to repair our friendships and everybody got on the same page again."

As for Eros being finished and released, Moreno added that he'd want the full band involved even though revisiting ideas from over a decade ago might be difficult.

"I wouldn't want to do it by myself. I'd want input from the rest of the band, so it'd have to almost be like we were doing a record again, but starting with ideas that were like how many years now? If that was 2008…"