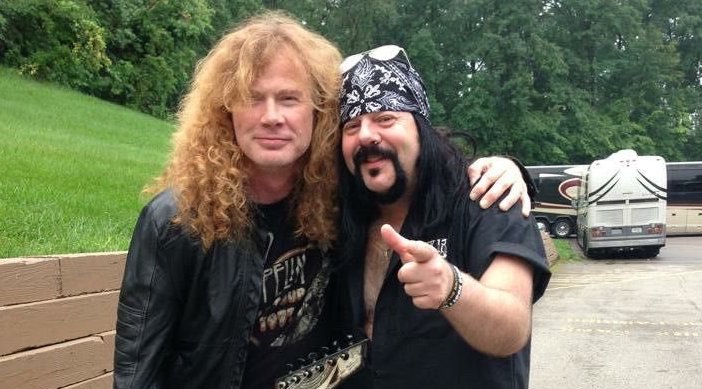 In a new interview with the Tampa Bay Times, Mustaine says he asked Pantera guitarist Dimebag Darrell to join Megadeth in 1988, which Dimebag would've done only if he could take his brother and drummer Vinnie Paul along with him. The deal didn't quite work out and everyone went on to be legends anyway. Though can you even imagine a Megadeth record with Dimebag on it? Even crazier, can you imagine a world where modern Pantera never even existed as we know it?

Were you and Dimebag Darrell into each other’s gear? Did you have different philosophies on the instruments you played?

"I did not. He may have, because he was a better guitar player than I am, and he was much more into that stuff. Being a bandleader/guitar player/rhythm player/lead player/blah blah blah, I don't have the availability to spend as much time working on my solos as I'd like to. But I'm also very satiated with what I've done with my career.

"And with Darrell, when you look at his playing, he's a monster. He's one of those guys that in trios, with the bottom dropping out, he was really able to keep that going. Of course, on the studio releases, there was an additional track going, but live, that's the real litmus test, right? And he was a spectacle to watch.

"I actually called him up and asked him to play in Megadeth. Fate would have completely changed if I would have called him before I called Nick Menza. I said, 'Hey, Darrell, I'm looking for a guitar player.' And he goes, 'Can I bring my brother?' And I went, 'Who's your brother?' He goes, 'Vinnie Paul! Don't you know Vinnie Paul?' He wanted to bring his brother and have him play with us, and I go, 'Oh, man, I just hired Nick Menza.' Can you imagine what Vinnie and Darrell would have been with me and Junior [David Ellefson]? Would've been pretty cool."