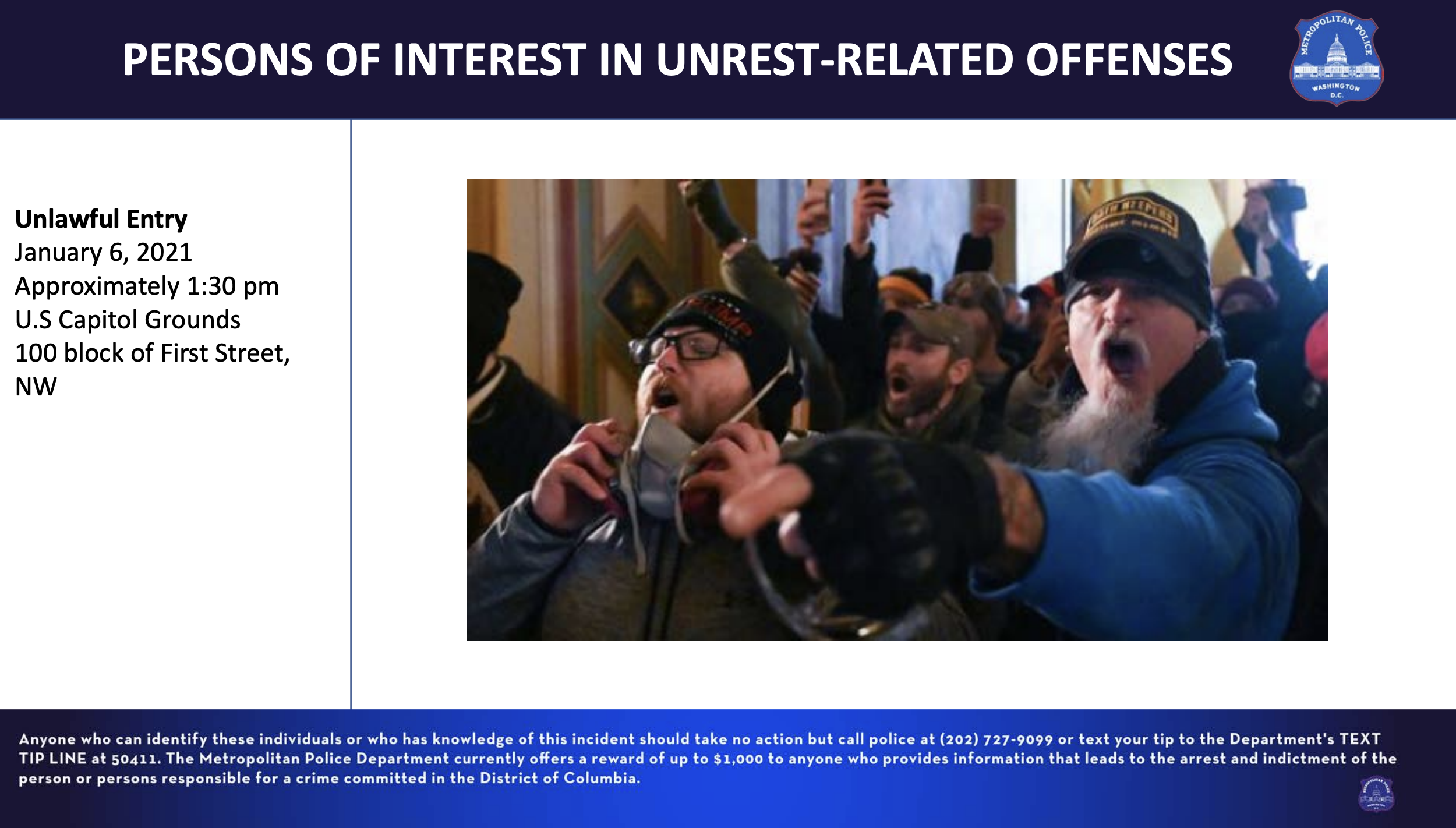 Yesterday, eagle-eyed Iced Earth fans seem to notice a familiar face storming the United States Capitol building – guitarist Jon Schaffer. While it's not 100% confirmed that Schaffer is the one in the photograph, the clothing he wears matches clothing worn on previous occasions, and you can see the wrist tattoo matching. Now, authorities are seeking information about Schaffer, who they are seeking to charge with Unlawful Entry.

Multiple fans on the Iced Earth Facebook page have pointed out that the MPDC (Metropolitan Police Department of the District of Colombia) have released a PowerPoint presentation seeking information on people photographed raiding the Capitol building yesterday.

One of the slides includes the photo purported to be Schaffer. Local police are offering up to $1,000 for any help identifying the persons displayed, even though Schaffer and multiple other figures in the photographs have been publicly identified.

“Anyone who can identify these individuals or who has knowledge of this incident should take no action but call police at (202) 727-9099 or text your tip to the Department’s TEXT TIP LINE at 50411,” the agency said, saying Schaffer is wanted for Unlawful Entry. “The Metropolitan Police Department currently offers a reward of up to $1,000 to anyone who provides information that leads to the arrest and indictment of the person or persons responsible for a crime committed in the District of Columbia.”

Schaffer marched in a previous protest in November, and identified himself to a German newspaper, although he was erroneously referred to as "Jon Schaper."

John Schaper [sic] is marching steadily on Pennsylvania Avenue in Washington. By "they" he means the establishment of American politics. A black and white picture of Donald Trump is emblazoned on the back of his vest. The President is holding a gun in his hands and the American flag can be seen in the background. And underneath the words: "Drain the swamp", drains the swamp. The quagmire of established politicians whom Trump despises as much as his supporters do.

Schaper, gray beard, silver earring, has traveled from Indiana to take part in a protest march in the capital.

The man who runs a few meters from Schaper wears camouflage pants. He has thrown his backpack over his right shoulder and a helmet, also in camouflage, is dangling from it. A logo on his vest reveals that he is a member of the Oath Keepers – an extreme right-wing militia made up mostly of former military and security forces.

Does Schaper expect riots? “If someone uses violence against us, we will react accordingly. We don't want that, but we are ready, ”he says. His tone of voice leaves no doubt that he means his words seriously.