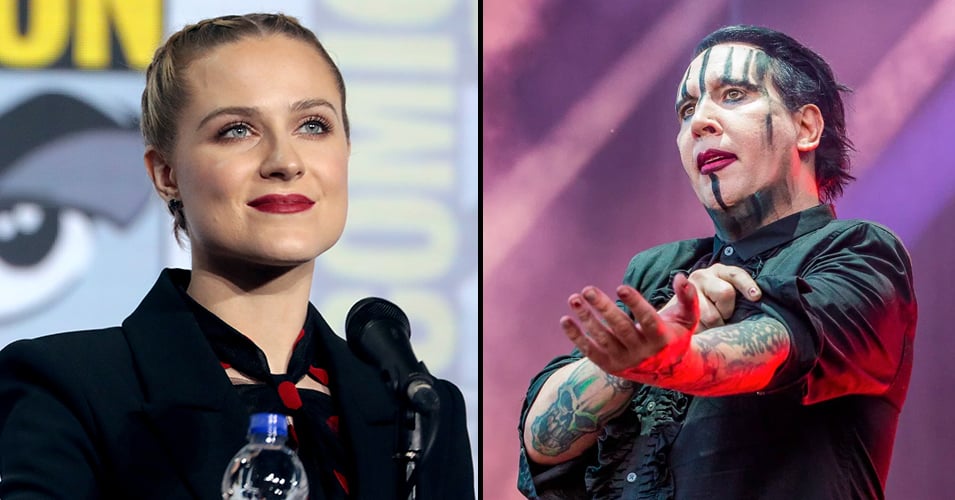 In April 2020, video footage of Westworld star Evan Rachel Wood testifying in front of California state senators last year to create the Phoenix Act has resurfaced. The footage shows Wood detailing a very abusive relationship she had when she was eighteen years old. During the testimony, she didn't explicitly name her abuser. Today, she has gone on the record that her abuser is Brian Warner, a.k.a. Marilyn Manson.

On Instagram, Wood writes "The name of my abuser is Brian Warner, also known to the world as Marilyn Manson. He started grooming me when I was a teenager and horrificly abused me for years."

She writes she was "brainwashed and manipulated into submission. I am done living in fear of retaliation, slander or blackmail. I am here to expose this dangerous man and call out the many industries that have enabled him, before he ruins any more lives."

She concludes by writing "I stand with the many victims who will no longer be silent."

In a November interview with Metal Hammer, Marilyn Manson promptly hung up when the magazine began asking about the allegations. In a long, follow up statement, Manson's representative denied the allegations.

“It became clear the abuse he’s caused; he continues to inflict on so many and I cannot stand by and let this happen to others,” says Ashley Walters. ​“Brian Warner needs to be held accountable.”

“I believe he gets off on ruining people’s lives,” writes Sarah McNeilly. ​“I stand in support of all that have and all will come forward. I want to see Brian held accountable for his evil.” McNeilly went into detail about the abuse she suffered:

“He (Brian Warner aka Marilyn Manson )lured me in with ‘love bombing’. Posing as the perfect boyfriend. Claiming he was just misunderstood.

“Charming, smart, funny, charismatic. As he was wooing me I would come to find out he was torturing others. Before long I was the one being tortured.

“I was emotionally abused, terrorized and scarred. I was locked in rooms when I was ‘bad’, sometimes forced to listen to him entertaining other women. Kept away from certain friends or if I didn’t he would threaten to come after them. I was told stories of others who tried to tell their story and their pets ended up dead. I wasn’t allowed to go near other artists working on the same set, as he told me they had aids and were disgusting and if I did so he would be very upset and ‘I wouldn’t want that’. I was verbally berated for hours upon hours. Blamed for everything under the sun in order to make me feel worthless. Any male friends in my life were not allowed any longer. He threatened to shank one of them after they posted something on my Facebook page.

“I was thrown up against a wall and he threatened to bash my face in with the baseball bat he was holding, for trying to get him to pick out a pair of pants prior to a music video. I witnessed him staging problems or hiding missing objects in order to justify his violent outbursts. I witnessed him recording others unknowingly in order to have blackmail on most anyone who entered ‘the meat locker’ (as I called his home, it was kept at a chilly 62 degrees always). I witnessed him terrorize and abuse others in my presence. Slander his exes.

“I have been afraid to bring any spotlight upon myself as to avoid winding up in his crosshairs again. As a result of the way he treated me, I suffer from mental health issues and PTSD that have affected my personal and professional relationships, self-worth and personal goals. I believe he gets off on ruining people’s lives. I stand in support of all that have and all will come forward. I want to see Brian held accountable for his evil.”

“The reason I’m finally sharing this traumatic experience is for my healing and because I’m done being silent,” says Gabriella. ​“I don’t believe it’s fair for someone to not be held accountable for their horrific actions. I’m not a victim. I’m a survivor.”

Morgan says that she “was given rules and got ‘in trouble’ for any behavior he didn’t approve of… He would throw me out of the house in next to no clothing if I fell asleep at 3 am. I wasn’t aloud to eat, or sleep, or leave.” She also claims that there was “sexual violence, physical violence, and coercion.”

Their full accounts of the abuse can be seen below. A former tour manager for Manson backed up Evan Rachel Woods' claims of abuse, in a statement this past September.

The Phoenix Act in California extends the statute of limitations on domestic violence felonies from three to five years, as well as requiring police officers to undergo more training in regards to domestic partner violence.