Dave Lombardo drummer for Slayer throughout the 80s up to 1992, and then again between 2001 and 2013. Given those time frames, you'd assume that Lombardo had accrued quite the classic Slayer drum collection. Unfortunately you'd be correct, though a lot of them have been stolen.

According to Lombardo in an interview with Hangin' & Bangin', a lot of his classic Slayer kits have been stolen due to three separate robberies.

"Unfortunately… I don't have many. Two storage units, at two different times in periods of my life, were broken into," he said. "So, I think, probably five-six drum kits out of the first storage unit were stolen. It was cleaned out – everything, road cases.

"And Slayer's rehearsal room that we were at in Riverside was broken into; everything was stolen, all my classic drum sets. So I'm slowly building everything up again and trying to piece together some of my old classic kits, from kits that I see online that are similar."

So somewhere out there exists some seriously amazing Slayer memorabilia that hopefully will one day make its way back to Lombardo. 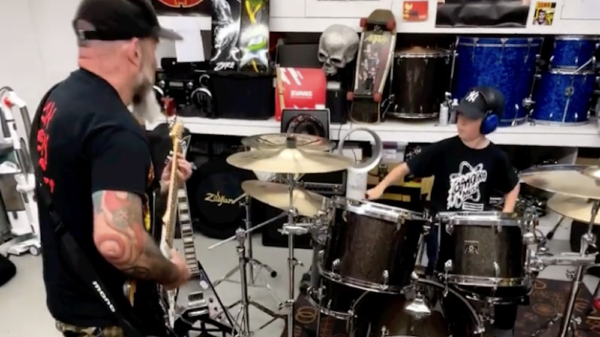 It's great, which should surprise nobody.