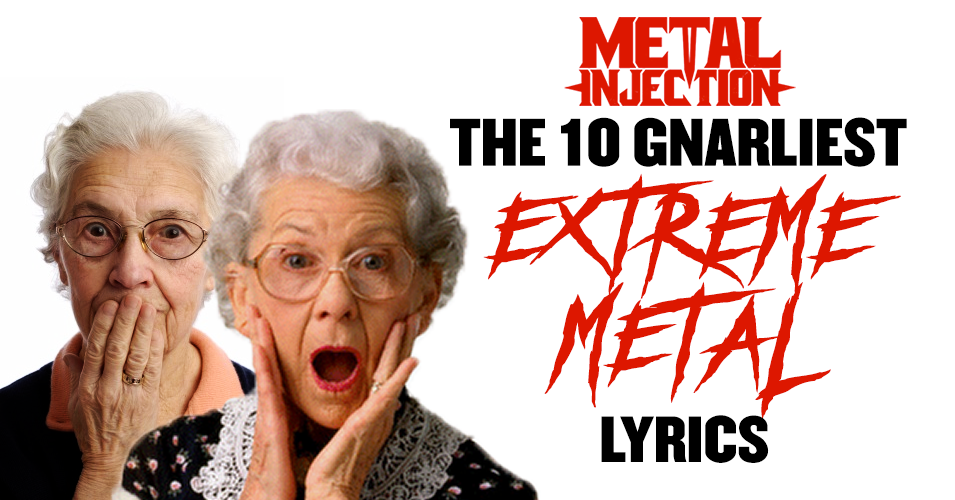 Heavy metal is nasty, loud, rude, and crude. These are positives. There’s nothing that rubs my hairy buttcheeks the wrong way more than metal fans who try to “legitimize” our beloved music. Yes, we all know that a large part of heavy metal comes from the classical music world, and yes we’re heard about how metal fans are happier, more well-adjusted, and are more likely to be good monogamists than their peers, but let’s not delude ourselves—metal is not meant for popular consumption. It’s trash culture with a Gothic glaze; it’s drive-in movies with electric guitars. More importantly, it’s subculture predicated upon scaring your parents. Whether or not it does that anymore is open for debate.

The best way to celebrate metal’s lack of subtlety and its gleeful fixation on transgressive behaviors is to celebrate those bands and individuals which willfully cross the line again and again. Since extreme metal is, well, “extreme,” the most repeat offenders come from either the death or black metal scenes. No surprise there, but I fully expect some criticisms with the following choices. After all, what one man considers disgusting, another man yawns at. You can’t make everyone happy, but hopefully these 10 gnarly lyrics will trigger some sort of reaction in your guts, throat, or, best of all, your bowels.

Two quick disclaimers: 1) This article obviously contains graphic language; and 2) The rule, which I just made up, says that a band can only appear once. Got that, jerks?

Tied tight to the bed
Legs spread open
Bruised flesh, lacerations
Skin stained with blood
I'm the only one you love
I feel her heart beating
my knife deep inside
Her crotch is bleeding

If you think that’s bad, wait till you see the payoff (or is it money shot?)

Hubba hubba, eh? Turns out the boys in Cannibal Corpse can really woo ‘em. Maybe they got rid of Chris Barnes after The Bleeding because the band was close to going respectable. Just look at that romance.

When your band is closely associated with arson, suicide, and cannibalism, a couple of naughty lyrics seem trivial. Also, when compared to a certain cover photo, “Chainsaw Gutfuck” seems like a warm and hearty ditty about strange methods of copulation. Still, when “Chainsaw Gutfuck” was released, Norway’s Mayhem were years away from their infamy. At this point, the band was little more than a Venom-meets-Celtic Frost hybrid, except with potty mouths and a singer who had the enunciating skills of a coked-up auctioneer.

Maggots crawling in her cunt
I just love to lick that shit
Bury you in a slimy grave
You will rot forever there!

Autopsy do not believe in foreplay. They like getting into the thick of things at the very outset. Take for instance the opening lines of “Charred Remains:”

Death metal songs about death are more or less mandatory, but Autopsy attacked the topic with real piss and vinegar. Severed Survival introduced the world to a band that took gore seriously. Their first testimonial was “Charred Remains,” which ends on a high note.

The rancid smell of burning hair
Screaming in excruciating pain
Blood boils over, warping veins
Burnt skull collapses onto melting brains
Spontaneous death, up in flames
Twisting and writhing as life burns away
Until nothing is left but charred remains

Whereas other death metal acts reveled in cartoonish descriptions of gore, Carcass’s lyrics were always taken straight from medical textbooks on autopsies and the other surgical arts. Even if all their gross images and lyrics are meant to be some kind of vegan/vegetarian concept art, Carcass’s medical take on death metal goregrinding can still make most folks squeamish.

Although “Swarming Vulgar Mass of Infected Virulency” reads like gibberish, it actually tells a very moving story about a young teen afflicted with acne. When a very special doctor named Walker decided to help the poor chap out, he succeeded in not only saving the boy’s skin, but he even managed to correct his love life as well.

The juice is squeezed
Sebum bleeds
Lick the pox
Weals and warts...

Nattefrost, aka Roger Rasmussen, promotes a more punk rock take on black metal. As such, it’s easy to make Nattefrost into a sort of elaborate joke, even if you take into account the legendary humorlessness of Norwegians. Most Nattefrost tracks contain an erratic word salad of death, vomit, murder, and self-hatred. “Preteen Deathfuck” is no different, although the idea that the victim in the song is younger than 13 makes it more barbaric than the rest.

Seven years old with two bleeding holes
Fucked her for days in every thinkable ways
Her innocent cries couldn't milden my heart
I stabbed and stabbed, and I cut her apart!!!!

Exhumed may very well represent the apex of death metal excess. Their debut album alone is worthy of anointing them as the premiere goregrind act of the century. But before they made their first real splatter, the band was busy churning out demos like Goregasm. You can’t find a more appropriate name for Exhumed’s music, for they make completely unnecessary levels of violence sexy. On “Ziploc Bodybag,” listeners were treated to an early inkling of the band’s hotter-than-a-blowtorch songwriting skills.

Cavities are opened, innards dislocated
Gastric fluid gurgles, as your entrails are masticated
Vile evisceration, discarded in a box
Liquefacted autopsy, I ladle the cadaverous slop…
Peeling the perforated skin
Scour the malignant scabs
I collect the putrid offal
In a ziploc body bag.

Butt plugs intensify the sensation you feel
When your clit's being played with
Now he started hammering into her,
So hard you could hear his crotch slapping
Up against her arse.

Blasphemy, like gore, is beyond mundane in metal. Loud denunciations of God and Christianity are so common in certain strains of extreme metal that the only way to be rebellious anymore is to be openly faithful. That said, a lot of people can take detailed descriptions of blood and guts, but can’t handle sacrilege. Hell, I’m sure more people would prefer in-depth conversations about awkward sexual encounters than they would anything that smacks of religion. Hypocrisy decided to go whole hog on Penetralia, which contains a certain desecration called “God Is a Lie.”

So, you think you're a god!
You're nothing but a piece of shit,
and if I get my hands on you,
you will slowly die!
Oh the church of God
preaching all the shit
I'm not scared of you
I think Jesus,
God Is a Lie

While the later paean to Satan sort of dilutes the message (in my humble opinion, of course), “God Is a Lie” is a bold-faced renunciation of Christianity that could still scare some blue-hairs or otherwise wholesome types not used to metal’s lyrical routines.

Megadeth once wrote that “Peace Sells.” Impaled, however, believe that poop sells. “Rest in Faeces” is their ode to brown gold. You might even say Impaled are in love with the caca, or at the very least, obsessed with toilet mess. Either way, “Rest in Faeces” is about when the pipes get backed up in the worst possible way.

A fusty cargo of human excreta
Impacted pipes caused the flow to reverse
Upon the cemetery, liters of diarrhea
As the leaden veins burst… rest in faeces
A tsunami of ordure saturated the hallowed soil
Corpulent ballast disinterred coffins, amongst the manure, embroiled
As rectal mung flows
Cadavers exposed
Tombstones in pieces
Resting in faeces
Carcass and sewage
A copro-barrage
It never ceases
Resting in faeces

At this point I should make a joke about tacos or Mexican food in general, but I’ll take another dirt road and say that “Rest in Faeces” is the audio equivalent of a rotten tuna fish sandwich.

When it comes to the gnarliest, Spinal Tap rules the roost. When it comes to beautiful lyrics with a sleazy message, the song to beat is “Big Bottom.” Feast on this delightful morsel:

Never has metal descended to such lows. Metal Injection readers: stand up from your Mountain Dew deliriums and clap for the world’s greatest rock and roll band and their magnum opus. Let us now praise dirty butts!