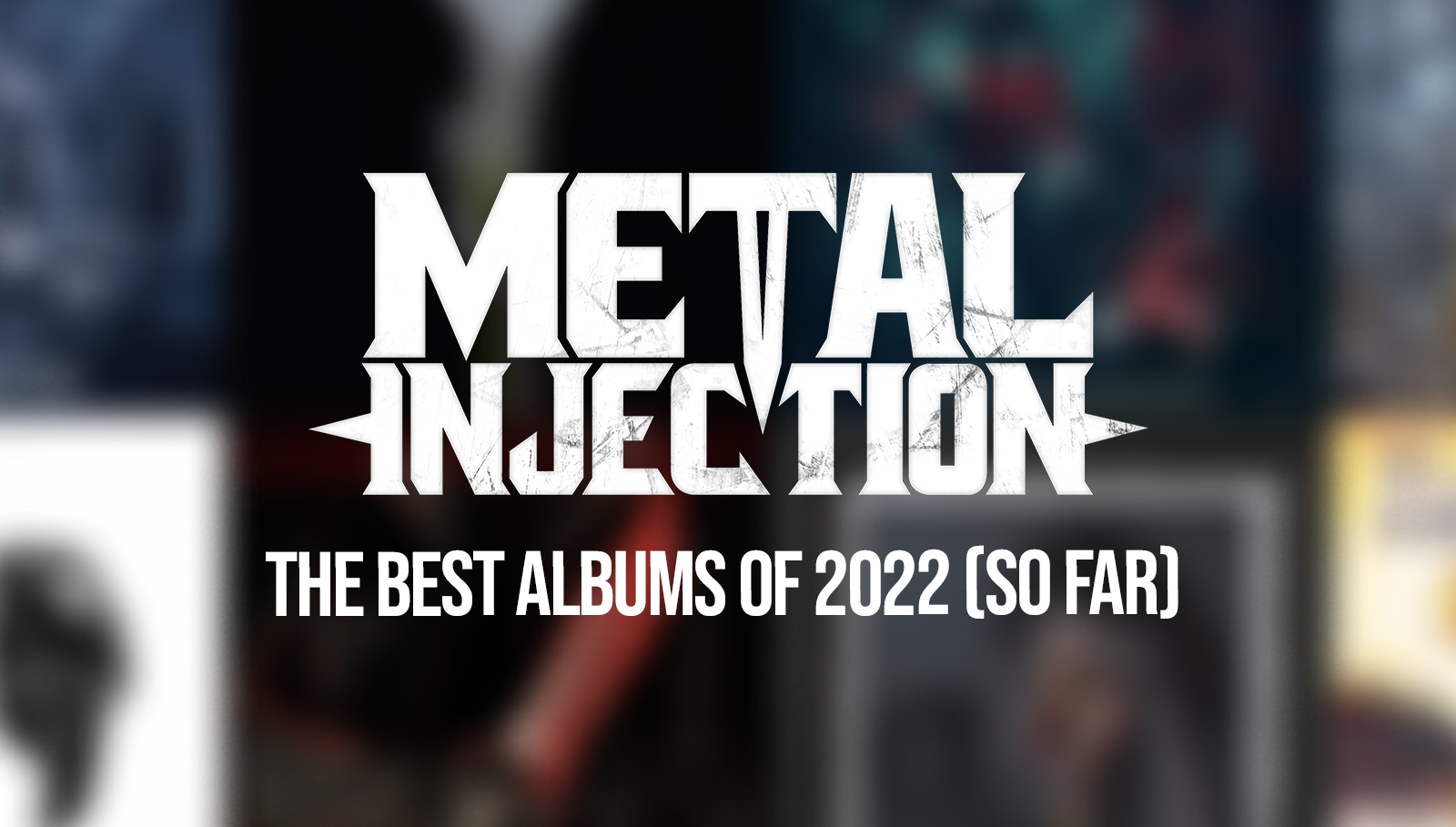 We're a little over halfway through 2022 and there have already been a handful of Album Of The Year contenders released. So we polled everyone at Metal Injection about what their favorite albums of 2022 are so far, and this is what they came up with!

And if you're looking for a week-by-week breakdown of this year's new music, check out our comprehensive lists of weekly releases here.

Over the course of fifteen years, Animals As Leaders have grown from a glorified solo project to the finest and most influential instrumental group of this generation. Their fifth album Parrhesia balances the heavy and complex elements found on previous records, whilst advancing their sound into new territory. "Conflict Cartography," "Gestaltzerfall" and the beautifully mysterious "Thoughts and Prayers" are tremendous tracks that transcend the notion that instrumental music is solely for musicians. It does take a few spins to digest everything on offer, but once it begins to click, the talent and brilliance of Parrhesia and Animals As Leaders becomes impossible to deny. – Andrew Kapper

Bleed From Within – Shrine

The Scottish gents are back with their sixth album, and I’ll be damned if it’s not their most focused and captivating work to date. Donning the band’s motif of blending djenty prog, groove metal and melodic death, Bleed From Within hit it out of the park with Shrine in a package I can’t stop listening to. It has everything I love about modern metal starting with memorable riffs that'll leave you starting the album over again once it's done. Definitely one of my favorite, and surprising releases of the year. – Frank Godla

The latest album from Carpenter Brut is an incredible. Cinematic in scope and seamless in weaving a slew of genres together. Sure you might know the act for being more synth/darkwave, but there is plenty of heaviness in this project. Conceptually this is a slasher story, one that keeps getting more menacing track by track, derailing into lunacy. There’s guest appearances from Greg Puciato (Greg Puciato, ex-The Dillinger Escape Plan, etc.), Ulver,  Gunship, and Johannes Andersson (Tribulation). This album is epic, stupidly fun, heavy, danceable, and finishes black metal as hell. – Christopher Luedtke

It's currently a toss up between Ghost, Porcupine Tree, and Cave In, but I'm going with the latter right now. Cave In's latest record Heavy Pendulum is their first full-fledged effort with bassist and vocalist Nate Newton stepping in for the late and great Caleb Scofield, and it's nothing short of incredible. From straightforward rippers like "New Reality," to the laid back grooves of "Reckoning," up to the gargantuan closer "Wavering Angel," Cave In makes 70 minutes feel like seven. You're doing yourself a musical disservice if you're not checking this record out. – Greg Kennelty

As I wrote in my review, Vaxis II counters the prolonged nature of its predecessor by evoking the economically hooky blueprint of the Afterman records. It thrillingly ties itself to Vaxis I by recalling the "Old Flames" motif, and it houses gems both traditional ("Beautiful Losers," "Love Murder One") and at least marginally atypical ("A Disappearing Act"). That said, the true highlights come at the end, when the one-two-three punch of "Ladders of Supremacy," "Rise, Naianasha (Cut the Cord)," and "Window of the Waking Mind" unite to yield possibly the greatest finale in the band's history. It's a remarkable ride. – Jordan Blum

Conjurer once released a t-shirt featuring Steve Harwell of Smashmouth on the front and "the riffs start coming, and they don't stop coming" on the back. Memes aside, that's more or less what makes Conjurer so great. It's all about the riffs for these guys, whether it's black metal blizzards, sludge metal grooves or deathcore breakdowns. On their sophomore album Pathós, Conjurer emphasizes a distinct balance of progressive technicality and tasteful songwriting. It's a more atmospheric, doomy take on their style, but it doesn't hit any less hard. For each foray into serene ambiance or melodic balladry comes an apocalyptic tidal wave of sonic devastation—held together by four musicians who know exactly how to bring the best out of each other. There's so many fun nuances to their approach, whether it's vocal layering, beat-making or riff-mongering, that re-listenability naturally follows. But really, it's the feeling of Pathós that makes it truly great. It's in the name! It's not just punching you in the face with riff-a-minute onslaughts, but also taking you on an emotional journey. – Max Heilman

Dark Funeral – We Are The Apocalypse

Quite simply, this is Dark Funeral's greatest achievement. It is their crowning moment. They've been leading up to this point with a number of great releases in the recent past but We Are The Apocalypse represents the apex of both their songwriting and musicianship. The band takes it easier with the speed here and there and this forces them to rely more heavily on nuance and atmosphere to really get the most out of each composition. There's diversity on this record and there's careful attention to songcraft in the respect that each and every song belongs on the record. Absolutely no filler. Also, vocalist Heljarmadr gives a 10 out of 10 performance. He's downright astounding here. – Jeff Podoshen

A Heartless Portrait (The Orphean Testament) is an album of contrasts. It has some of their heaviest sections in quite a while. Bombastic guitars are front and center on songs like opener "Save Us" and the driving "Blindfolded." There are also mellower and more introspective songs such as "Wildfires." Evergrey write songs that are dramatic, but avoid melodrama by connecting emotionally with the listener, thanks mostly to Tom S Englund's dynamic singing style. Their arrangements also have a lot of depth, sometimes using symphonic elements, other times utilizing more subtle keyboard sounds. Those ingredients make this another outstanding Evergrey album. – Chad Bowar

It's been a corker of a year for metal so far, with OG's doing their damn thing (Meshuggah, Crowbar, Voivod, Corpsegrinder, Kreator), to the new guard of heavy hitters (Undead, Night Cobra, Bodysnatcher, Moon Tooth) and my forever playlist staples dropping new gems (Ghost, Decapitated, Midnight, Zeal & Ardor, Mantar, Municipal Waste). I figured why not shine a light on a band proudly waving the trad-metal flag in the vein of Judas Priest, Iron Maiden and Angel Witch. Belgium's Evil Invaders and their latest album Shattering Reflection is pure metal to the chest. No frills. No bullshit. Right in the feels. For newbies, check out "Die For Me" or "In Deepest Black" or "Sledgehammer Justice." – Dillon Collins

The rise of Ghost has to be the most unlikely success story in the history of metal. On paper, nothing works. But thanks to a combination of undeniable riffs, reckless confidence and the power of Satan, Ghost became the breakout heavy metal act of the 2010s. On Impera, Papa and The Nameless Ghouls are staking their claim on the next decade. You can almost hear frontman Tobias Forge sneering at all the doubters when he proclaims 'We'll be singing in a rain of pennies' on "Twenties". Judging by the band's headlining arena tour, he's not far off. Not bad, for a band that managed to surprise everyone. – Max Morin

The last couple of years have needed some big, bold music. We've needed music to distract us, music with a touch of ostentatiousness that really paints a picture in your mind’s eye – even if that picture is more than a bit dorky. Thankfully, Hammerfall’s sense of cool-to-be-uncool grandeur is as impeccable as ever. Yes, the formula was established twenty-five years ago and has been fiddled with very little since. But Hammer of Dawn proves that the right ratio of panache, skill and a good old-fashioned knack for writing belting earworms can combine to make their twelfth studio album one of Hammerfall’s best releases for a long time. – Shaun McKenna

Call me superstitious, but there's something magical about when a longstanding death metal band reverts to their old logo. On their latest album, Acts of God, Immolation takes every strength they've honed for decades and brings it all together into one cohesive performance. The production, historically an aspect that's very hard to get right for the band's approach, hits that elusive Goldilocks zone between fullness and sharpness (like, if Goldilocks went looking for riffs instead of porridge, or something). Songs like "The Age of No Light," "Blooded" and "Apostle" show the band at its very best — dark, brooding, unpredictable — glorious. – J. Andrew

Do you love raw, curmudgeonly, no-nonsense True Norwegian Black Metal?! Khold's seventh studio album, Svartsyn, pulls no punches; rather, it hooks you straightaway with aggressive minimalism that cuts like Occam's razor. Cold and imposing as a brutalist monument, Svartsyn is the perfect album for an imperfect year. We are so glad that Svartsyn marks such a glorious return for Khold, whose previous record, Til endes, was unleashed in 2014. Khold features Tulus' current members — drummer and main songwriter Sarke, vocalist and guitarist Gard / Blodstrup, and bassist Crowbel —  plus guitarist Rinn. Khold continues to benefit from the refined hand of lyricist Hilde "Hildr" Nymoen, Gard's wife. Enjoy Svartsyn's groove and old-school hard rock influences. – Jillian Drachman

If you decided to call your band Skull Fist, it's probably a good idea to be sure your band abides by the "no false metal" rule. This is exactly what you get with the Toronto band Skull Fist. Savage, lightning-fast riffs that sound like they came from the late 70s or 80s from vocalist Zack Slaughter who shows off his more than impressive vocal range on jams like the Scorpions-esque "For the Last Time," and "Crush, Kill, Destroy." Skull Fist's 2022 record, (the band’s fourth), Paid in Full delivers the metal goods and then some. Long Live The Fist! – Cherry Bombed

There have been a lot of great albums so far this year, but my favorite release of 2022 is a collection of unreleased recordings from 2006/2007 – but only surfacing this year. Much like Deftones unreleased Eros sessions, these lost to time tracks have been the stuff of legend around Australia metal circles for years, with those close to the band claiming the material was on par with the quality of their 2003 masterpiece Between Birth & Death. Dropping without warning 15 years later under the name Hate & Winter in January, this collection of dark bangers was definitely worth the wait. With the band reforming and selling out shows across Australia, we can now hope for an official release. – Sam Hart

Zeal & Ardor was wildly unique in its inception but felt doomed to stagnate in what could be dismissed as a gimmick with the whole blues and black metal cocktail thing. On album number three Manuel Gagneux's quirky online experimenting has infected the Zeal & Ardor identity and it resulted in his finest moment yet. This is his most diverse and exploratory album so far with moments of indie, jazz, industrial, and more added into the aforementioned cocktail. His recent foray into yacht rock gives me hope for the Zeal & Ardor album to head into even more uncharted waters next time. Get it? Uncharted waters, because yacht rock? Anyway, this album is sick. – Daniel Cordova