Frank's Top 10 Most Anticipated Releases of 2010

Today is the eve of a new year (and a new decade), with that Frank takes a look at some albums that will be released in the coming year that he is beyond stoked about:

When Chuck Schuldiner passed away in 2001 an unforgettable chord was struck on the extreme metal community, I still remember how much of a depressing time it was. While everyone in New York was still overly occupied about their feelings for 9/11, I spent my December walking around extremely bummed for different reasons. I remember being incredibly shocked at how little attention his passing received, "MTV gave Kurt Cobain 48 hours of nonstop coverage when he shot himself, and not so much as a 2 minute mention for a true hero like Chuck!?" was the kind of shit naturally running through my head. Almost a year after his passing I heard the rest of his band mates in Control Denied (including Richard Christy and Steve DiGiorgio) would try and finish the record that Chuck had started, and apparently recorded guitar tracks for. Well needless to say 1 year of waiting turned into 7, and FINALLY in 2010 we're expected to see the return of Chuck's legacy and final chapter. I am so incredibly stoked!

Their debut LP "Winter Madness" just might be one of the most sonically and musically flawless records I've ever heard! Judging by the interaction between Jari (guitar, vocals, song writer) and his fans concerning the new record, I dont think I'm alone. In the past couple years Jari has been very forward with the writing and recording process for his new opus entitled "Time", updating his blog with concerns ranging from guitar tones, computer problems, writer's block, to living up to follow up expectation has begun to almost seem comical once the release date saw it's 3rd year of set backs. From what I heard he even deleted the LP and started over, being the perfectionist that he is (sound like the plot for a metal cartoon you know?). I'd hold my breath for 10 years to get my hands on a new Wintersun LP, but with the band announcing cancellations of all shows and festivals through out 2009 to complete the record, I'm absolutely stoked for the return of Wintersun in 2010!

Unless you live in a ditch somewhere (which is pretty metal, so I wont laugh regardless) you've played the shit out of Epitaph, and probably have seen them perform it live with 3 different drummers. It's been a while, and we're definitely over due for a new Necrophagist record to remind the world why they ARE the bar for extreme metal music. Now equipped with Romain Goulon on drums, I'm already doing back flips in anticipation.

A question I get asked very often is "What does that say on your hoodie?", well even when I answer "Mors Principium Est" the confusion only seems to grow deeper. This has been one of my favorite bands for a while now, and even though you may have never heard of them… get stoked! Their last record Liberation = Termination was a testament to what melodic metal should be, super fast, relentless drumming, catchy riffs, screams and growls that never pansy out into a clean vocal part, and real keyboard backing melodies. Their last effort also fused some industrial/trance electronics that not only didnt make me want to vomit, but left me wanting to hear more of it! I'm really interested to see where this band takes it next, because everyone of their releases has differed greatly from the last.

This is my #1 band to hike mountains to, they just may be the only band I know that can capture the epicness of nature itself inside a jewel case. Although they label themselves something completely different, I often regard them as "Atmospheric Metal" to paint a worthy picture of what their music sounds like. This band isnt always super heavy, but it's very dark and constantly experimental with each release. Agalloch is definitely worth checking out if your a fan of smoking weed, nature, or smoking weed in nature.

The Dillinger Escape Plan. Really, do I need to say more?

7. Arsis – Starve for the Devil

As you know, frontman James Malone has been in the metal tabloids (I mean Metal Injection) over the past year for his fight with anorexia. James is a geniounely nice guy and we're always bummed to hear when good people have problems, but I doubt it's effected his shredtastic skills any. Thus far Arsis has made one stellar record after the next, always mind boggling and relentless as the one before it. It should come as no surprise we're all eager to hear what Arsis has in store for us next.

It's about time! 5 years after the "This Godless Endeavor" release Seattle metallers ,Nevermore, are scheduled for a return. Now I have my favorite Nevermore LP's, but they are definitely a band I've never been disapointed with, and I'm sure The Obsidian Conspiracy will prove to be yet another amazing effort.

Burton and Dino together again!? Granted the members of FF have made quite a spectacle of themselves the past few years, but I was undoubatbly a huge Fear Factory fan back in the day, and their Obsolete tour is still fesh in my head as one of the best times I had at a show. I might be crazy, but I'm hoping Mechanize can live up to the band's first 3 records so we can pretend the past 10 years didnt happen. So far all the reviews I've heard have been great though, there is hope!

Alarum's follow up to 2004's "Eventuality" is coming, and man am I stoked. This band may not be as heavy as some of their technical deathmetal peers, but shit can they shred their instruments to pieces. We had the oppurtunity to see this Jazz Metal Fusion band from Australia at the Maryland Deathfest a few years back and it was incredible, hopefully this new release brings them back to the states.

Other LP's I'm really stoked about: 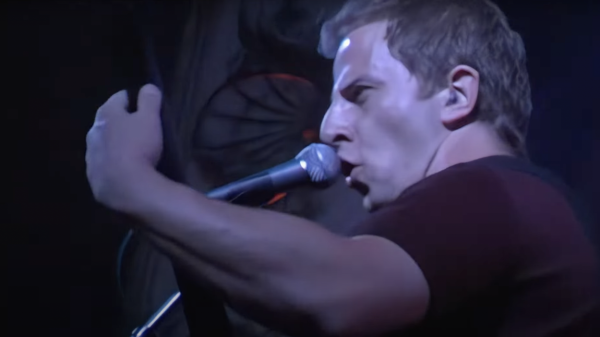 Relive The Majesty Of NECROPHAGIST With This Upscaled Set From 2007