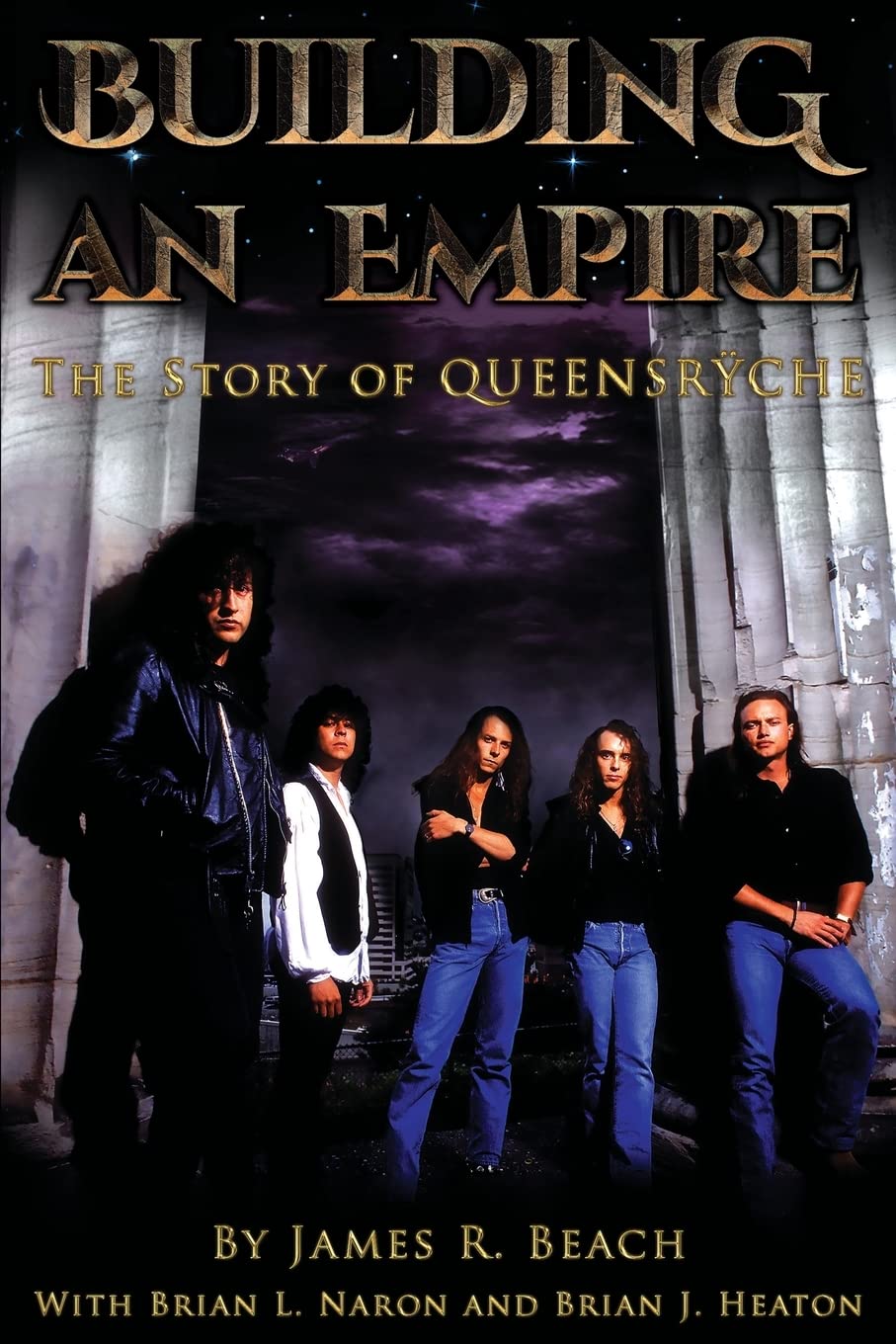 When former Kerrang! journalist Paul Suter wrote his stellar review for Queensrÿche's 1982 cassette demo for the magazine, he didn't know it would connect him with the band for several years to come. So it makes perfect sense that Pacific Northwest (PNW) heavy metal historian James R. Beach looked to Suter to pen the forward for his new book, Building An Empire: The Story Of Queensrÿche.

After listening to Queensrÿche's demo, Suter wrote an enthusiastically positive review for the magazine. The response to his review was just as enthusiastic, and demand to hear the band's music exploded – not just regionally but internationally. Released through 206 Records, an indie label owned by the founders/owners of Seattle record store Easy Street Records, the shop could barely keep up with the demand, and the demo/EP swiftly sold (according to Beach), around 15,000 copies through 206 Records alone. After signing the band, EMI would reissue the self-titled EP in 1983.

After releasing the four-song EP, the band would play their first two live shows as Queensrÿche in the late summer of 1983. In October, Suter would travel to Seattle to interview the band and see them live for the first time, opening a show for Dio at the Paramount Theater. Though Suter maintains he didn't "discover" Queensrÿche (he is often referred to as such), there is no doubt his early championing of the band helped the band immensely. As with his review of the demo EP, his review of the show and interview with the band continued to help increase Queensrÿche's notoriety worldwide.

As far as Queensrÿche's show with the unequaled Dio, Suter revealed in the introduction of Beach's book that "[Dio was] no match for the hometown heroes" that night. Fun fact! 23 years after opening for Dio, Ronnie James Dio would join Queensrÿche onstage and along with vocalist Geoff Tate, providing the vocals of Operation Mindcrime's antagonist Dr. X in a breathtaking version of "The Chase" from Operation Mindcrime II.

The excitement surrounding the band was ferocious, especially in Seattle. Queensrÿche's next big show in Seattle had Queensrÿche opening for Kiss during the Animalize tour in February of 1985. In just two short years, Queensrÿche was now being touted as the "biggest thing to come out of the city of Seattle since Jimi Hendrix and Heart." On the eve of the release of Operation Mindcrime in 1988, the band's most celebrated record – and consistently included in lists compiling the greatest heavy metal albums of all time – fans in Seattle lined up around the block (on a Monday night no less) at Tower Records on 5th Avenue. Beach, who was one the hundreds in line, described the scene as a listening party of sorts, both inside Tower and out in the parking lot where fans that scored cassettes were blasting it from their cars. As you can see, Beach and Queensrÿche go back a way – pretty much to the band's formation four decades ago.

If you are unfamiliar with Beach and love heavy metal, you should know he is considered the premier historian on the heavy metal scene of the PNW. Beach meticulously documented this in his previous book (seven years in the making), Rusted Metal: A Guide To Heavy Metal And Hard Rock Music In The Pacific Northwest 1970-1995. Clocking in at 902 pages, Beach refers to the volume as a "doorstep," as the history of metal and rock bands based or conceived in the PNW is so massive, it was too "unwieldy" to attempt to include them all. Outside of the members of Queensrÿche themselves, it would be impossible to name another person so well versed in the foundations of PNW metal and rock than Beach, who was also a fan of the band from day one and remains so to this day. And he's not alone. Here's more from Beach on his book, which exhaustively chronicles Queensrÿche history:

"From their formative years of jamming with friends and forming bands, playing covers and learning to play in front of crowds, starting to write original  music and pushing boundaries, to touring the world playing arenas and stadiums, selling millions of albums, and becoming a household  name. Interviews with the various members of the band themselves  over the years, friends, family, managers, producers and engineers, and many others involved with Queensrÿche help tell the story. We even asked various 'super fans' to recount some standout moments of them seeing the band live and meeting them in person."

Queensrÿche is quite possibly the most successful heavy metal band to come from Washington State. A state, as Beach has documented, where metal was and still is ubiquitous, and nearly impossible to catalog without some unintentional omissions due to its size and, in many cases, short-lived or obscure groups that were there and gone in the blink of an eye. To help support this fact are the results of a 2016 research project where a very smart metal enthusiast/journalist was able to compile a list of which U.S. cities historically had the largest number of heavy metal bands. Seattle was ranked at #8 with 489 bands with the PNW's Portland in the #2 spot with 618. Various members of Queensrÿche have also played a role in other PNW metal bands such as the legendary TKO and Culprit.

So does categorizing Queensrÿche as the most successful metal outfit to hail from the Emerald City (specifically Bellevue, WA) sound like someone's personal opinion? Sure. But that doesn't mean it isn't very close to the truth. And, as it turns out, Beach's Building An Empire co-author and Queensrÿche archivist Brian J. Heaton refers to himself as one of Queensrÿche's many "super fans" and has seen the band live, in its many incarnations, a staggering 37 times.

For fans of the nostalgic origin stories behind the successes (and sometimes failures) of great bands, Building An Empire does an engrossing job of mapping out the early days of the original members of Queensrÿche, some of whom have known each other since middle school. Geoff Tate (born Jeffrey Wayne Tate) would arrive on the scene a bit later when his family moved to Tacoma (a very metal city in the state of Washington in its own right) when Tate was fourteen. Geoff's aunt was a vocalist with the Cincinnati Opera and was, unsurprisingly, a very influential force in Tate's life as it pertains to his chosen profession. After moving to Seattle at age 19, he had already been actively playing in bands for two years. He auditioned for the band Tyrant, who would go on to make big noises in the Seattle metal scene in the late 1970s. He would get the vocalist gig only to have the band disband after losing a Battle of the Bands competition at the beloved Lake Hills Roller Rink – an eastside hot spot where you could catch Seattle-area metal bands on the regular back in the day. But after playing a bunch of gigs anywhere they could, Tate had made enough of an impression on the local metal scene and became a sought-after musician, leading to gigs in several other groups before the birth of Queensrÿche. This was also true of guitarist Chris DeGarmo, who was playing with the band Joker in 1979 (while he was still in high school), which also included Queensrÿche guitarist Michael Wilton. Drummer Scott Rockenfield formed the band Cross+Fire in 1980 along with future Queensrÿche bassist Eddie Jackson. Eventually, Tate, Wilton, Rockenfield, DeGarmo, and Jackson would come together briefly as metal cover band The Mob before claiming the name Queensrÿche.

Some of the compelling impressions Queensrÿche made early on included their sound and image being aligned with groups associated with or a part of the NWOBHM. It wasn't just the leather or their European-esque sound but also their ability to create a sense of dread and darkness, musically and visually. I can personally vouch for being absolutely terrified seeing Queensrÿche and Geoff Tate very up-close for the first time in September of 1988 when Queensrÿche opened for Def Leppard. His hair was styled dramatically–sort of like a heavy metal, seriously evil-looking version of Doyle from the Misfits. There was a lot of eyeliner, and his famous "piercing eyes," while lovely, penetrated the crowd like a green-eyed Dracula on the lookout for his next victim. In the book, Degarmo talks about the "darkness" wrapped within Queensrÿche's music in an interview from 1991:

"There were three sets of lyrics that  I wrote on the EP—'Queen of the Reich,' 'Nightrider' and 'Blinded.' At that time, I was in a pretty dark state. As a young teenager, I was fascinated with Jimmy Page and all that he was into—the warlock, the castle, Aleister Crowley—it was all spinning around in my head. I don't feel the same way, by any means, but at that time it was the Dio-esque, Maiden, Page sort of blur. I wrote the lyrics to 'Queen of the Reich' after having a nightmare."

In living up to the dark theme revolving around their debut EP, when it was time for Tate to record the lyrics for another song on the EP, "The Lady Wore Black," he would set the mood at Triad Studios in Redmond, Washington by turning off all the lights except for a single candle burning in the studio. If you've ever been curious about Tate's eerie whistling at the beginning of the track, as it turns out, it was never Tate's intention for it to ever be heard. He was just whistling in an attempt to continue to set the mood for the song. When the band played it back, they decided it needed to stay and the rest is heavy metal whistling history. "The Lady Wore Black" isn't the only Queensrÿche song where we get to hear Tate's whistling, he also whistles a bit on "No Sanctuary" on their first full-length, The Warning (1984).

Building An Empire: The Story Of Queensrÿche (released at the end of October 2021), is an incredibly detailed, loving homage to Queensrÿche, providing a unique insight into the band's career, and the prodigious impact they made in heavy metal in Seattle and beyond, told from the perspective of people that witnessed it first-hand. An absolute must-read for fans of Queensrÿche and fans of heavy metal history lessons in general.

With thanks to author James R. Beach.