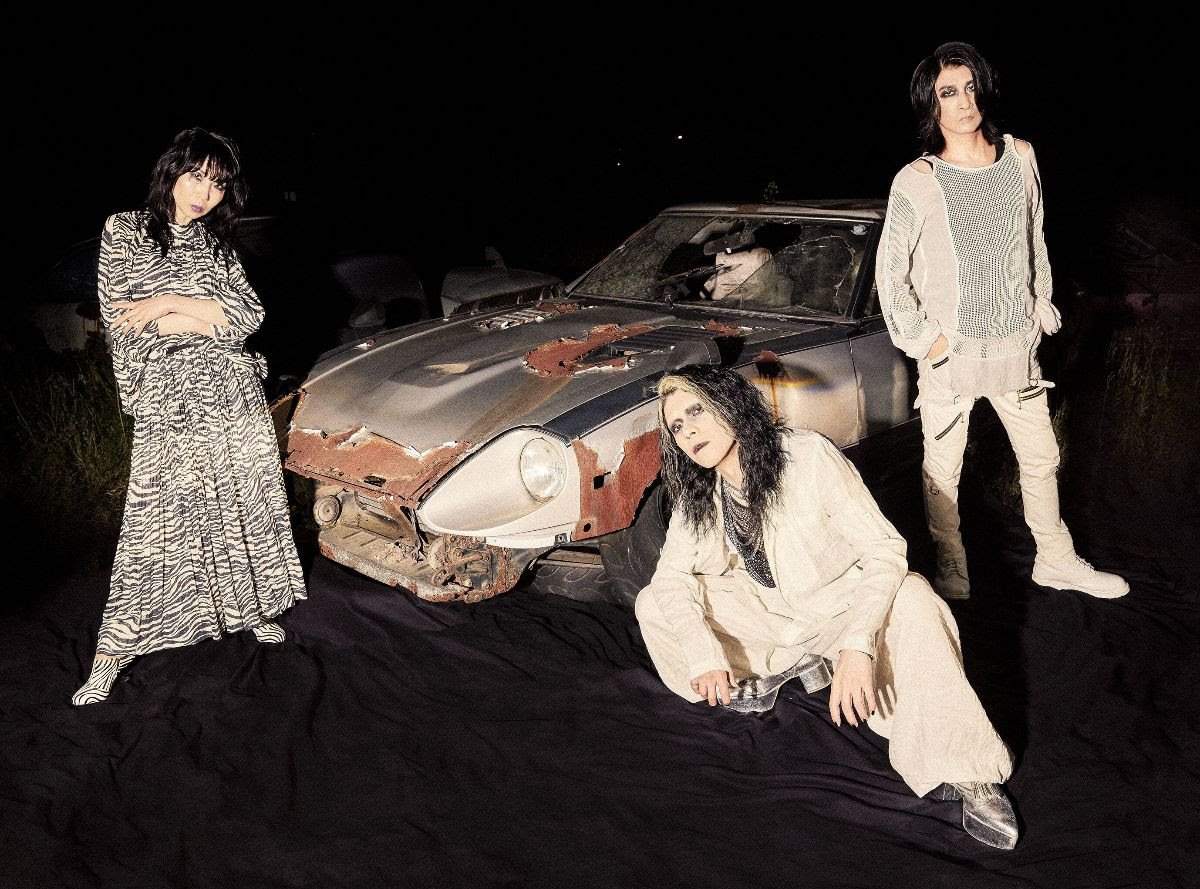 Boris – "She Is Burning"

When the hell does Boris sleep? The band has already released a new record named W, as well as covers of Truth And Janey's "Down The Road I Go" and Wanda Jackson's "Funnel of Love" this year. But wait, there's more! Boris has announced their new (again) record Heavy Rocks 2022 for August 12 and is now streaming the lead single "She Is Burning." Pre-order Heavy Rocks 2022 here.

If you're looking for noisy sludge rock from the bowels of Oklahoma City, then you're going to love Chat Pile's new single "Slaughterhouse." It's a raucous good time laced with enough venom to kill a few folks, and comes alongside a music video that seems to be tailor made to unsettle. Chat Pile will release God's Country on July 29. Pre-orders are available here.

Druids is bringing their particular brand of solidly progressive sludge once more with a new single "Hide." As drummer Keith Rich explains about the single, "We wanted to make a record that reflected the uncertainty of everything in 2020, and we figured this would be the time to really try something different." Druids will release their new record Shadow Work on June 3. Pre-orders are available here.

Technical death-metal band The Eating Cave, hailed by The Haunted's Ola Englund as "top notch tech-death at its finest," is now streaming their new single "Aggregate Vanity I: Heretical Hypotheses." Englund's assessment is dead on – this is guttural, disgusting death metal played with such precision and finesse that it's basically impossible to dislike. Ingurgitate is out June 10. Pre-orders are available here.

Enphin does a great job blending a darker-feeling synthwave with the gloomy aspects of bands like Katatonia, for a final product that practically demands to be played while out at night driving under the dim streetlights. Enphin will release their new record End Cut on June 24. Pre-orders are available here and here in the U.S.

Exocrine is here to do one thing, and that's go fast. Alright seriously though, Exocrine is legitimately well-written technical death metal that covers a lot of ground, which of course includes moving at the speed of light. I mean, they're signed to Unique Leader Records – what else did you expect? Exocrine will release their new record The Hybrid Suns on June 17. Pre-orders are available here.

It's time for another gnome-related dance routine, thanks to glorious weirdness that is Gnome. The band is now streaming their progressive, stoner-leaning new single "Kraken Wanker" alongside a new video that has some seriously great dance moves. What I love about this band is they've masterfully combined humor with genuinely good music that stands on its own. Check out Gnome's new record King here.

Haunted Horses is here to bring you industrial-tinged gloom thanks to their new single "Cold Medicine." The song is off Haunted Horses' new record The Worst Has Finally Happened due out July 29, which is also their first with bassist Brian McClelland (Filth Is Eternal, He Whose Ox Is Gored). If you're into stuff like Einstürzende Neubauten, Swans, or Death Grips, then this one is for you. Pre-orders here.

Hell Fire is now streaming their new single "Reckoning." The song feels like it should immediately summon a horse from under you and don you with the most insane battle vest you've ever seen, but it doesn't. Or at least it hasn't for me. Someone let me know if they've had a different experience. Hell Fire will release Reckoning on August 12. Pre-orders are available here.

Inexorum has gone from the solo project of Carl Skildum to now include Matthew Kirkwold, both of whom play in Antiverse and in Obsequiae's live shows. The project is streaming their single "Equinox Vigil" below, which continues down the path of Inexorum's perfectly melodic take on shimmering black metal. Inexorum will release Equinox Vigil on June 17. Pre-orders are available here.

Inhuman Condition, the band featuring bassist Terry Butler (Obituary, ex-Death) and The Absence (and both ex-Massacre members) guitarist Taylor Nordberg and drummer Jeramie Kling, is streaming their crunchy-as-hell single "The Mold Testament" below. Spoiler, given the lineup – it's killer death metal. Inhuman Condition will release their new record Fearsick on July 15. Pre-orders are available here.

The Machinist – "All Is Not Well"

The Machinist had one hell of a time throughout the pandemic, between line-up changes and personal struggles. Now the band is airing out all their anger and frustration in "All Is Not Well" and holy shit is it excellent. Sure it's pissed, but the writing and the performance of the song really bring that anger to life in a clever way. The Machinist's new album All Is Not Well is out July 8, and is available for pre-order here.

Obsidious is the new-ish band featuring ex-Obscura members guitarist Rafael Trujillo, bassist Linus Klausenitzer, and drummer Sebastian Lanser alongside vocalist Javi Perera. The band is now streaming their unsurprisingly technical new single "Bound By Fire" off their coming debut record Iconic due out October 28 (which isn't available for pre-order yet).

Pegzilla is your new favorite three-piece rock band. It's really as simple as that. With their blend of doom metal and stoner rock rumbling below killer melodies and soaring leads, what's not to love? Though you don't have to take my word for it – just check out their new single "Pamela" below and see for yourself. You can grab a copy of "Pamela" here on Bandcamp.

Greg Puciato is streaming his grungy, super roomy new single "Never Wanted That" off the coming record Mirrorcell. The single comes alongside a music video directed by Jim Louvau and Tony Aguilera, which was shot on tour while Puciato was playing in Jerry Cantrell's live band. Mirrorcell is out on July 1. Pre-orders are available here.

Psycroptic is streaming their new single "Rend Asunder" alongside a dark music video directed by Michael Rankine. Psycroptic's new record Divine Council is due out August 5 and features vocals from Jason Keyser of Origin. So if you're looking for something plenty brutal and blindingly technical, the combination of Psycroptic and Keyser should do it for you. Divine Council is available for pre-order here.

Somnus Throne is now streaming their new single "Lacquer Bones," in the event you needed something to get high to later on. Or even right now. Whatever the case, you'll absolutely dig this one if you're a fan of bands like Sleep and Acid King. Somnus Throne will release their new record Nemesis Lately on June 3. Pre-orders are available here.

Ukrainian sludge rockers Stoned Jesus are back with a killer new single "Porcelain," which vocalist and guitarist Igor Sydorenko said "sounds like 2000s Porcupine Tree covering 2010s Swans." And if that's not enough to immediately sell you on this song, then I don't know what is. Stoned Jesus is slated to release a new album sometime later this year.

Svart Crown will release their new Les Terres Brûlées on June 10 and is now streaming their crushing new single "Digitalis Purpurea." The band defines the single as an "astral journey" that spews forth chaotic vision of its own death in both dreams and reality, which Svart Crown does a great job conveying through the music – it's total madness, but there's a center to it. Pre-order Les Terres Brûlées here and here.

The Swell Fellas is now streaming their new single "Wet Cement," with an intro interlude called "Caesura" tacked on as a bonus. The song as a whole touches on a lot of psych-heavy riffing and crunchy grooves, though certainly leans toward the heavier side of things throughout. The Swell Fellas' new record Novaturia is out June 17 and pre-orders are available here.

Volcandra is now streaming their new single "Tallon IV" off their coming EP Border World due out June 24. "Tallon IV" spans everything from driving melodic death metal leads, to blackened blasts, and plenty of straightforward death metal influences to really get your headbanging going. Pre-orders for Border World are available here.

Between Wake's 2020 album Devouring Ruin and 2021 EP Confluence, and now their new stuff, this band simply cannot do any wrong. Take for instance their new single "Swallow The Light" – it's brutal as hell and plenty grindy, but with more than enough memorable parts to hook right into your brain. Take notes! Wake will release their new record Thought Form Descent on July 22, and pre-orders are available here.