Death Metal Monday: NEGATIVE VORTEX's Long-Awaited Debut Album Is Destructive
It's Monday and Mondays suck, so let's grind it out with a full stream of Languish's Unworthy.

It's Monday and Mondays suck, so let's grind it out with a full stream of Languish's Unworthy.

You know, Arizona has been on a hot streak. Gatecreeper, Spirits Adrift, NORTH, Noose Rot, and, well Languish. In the last two years, all of those bands have released excellent records on notable labels like Relapse, 20 Buck Spin, Sentient Ruin, and now Prosthetic.

If you've heard or followed Languish for any amount of time now, you understand what they're about: misanthropic death/grind/black metal of the most unforgiving order. Though they only have a handful of releases, they make no bone about leaving the listener coated in a sea of ash. This is the kind of band that can burn cities to the ground.

Unworthy is Languish's sophomore release. And if you thought Extinction had it in for humanity, you ain't seen nothin' yet. "Raze" opens the album. And it's perfect. It's the call to the apocalypse. It's Armageddon brought to your door on a silver platter. The track is quick to delve into bleak, grindy/death with a healthy dose of black metal to back it up. And by the time this blasting beast wraps up, you should know what this album is all about.

Languish haven't at all strayed from their initial, destructive mission statement. But they have evolved into something more primitive since inception. Unworthy is the band at their most unhinged. See, here they've tapped into a raw nerve that they had prodded at in the past, but here they're at their most blasting and pissed. Unworthy is a fusion of black metal/death/grind and 80s hardcore/punk. And what often binds the album is either death or grind, with the latter, I'd argue, being slightly more dominant. When tracks like "Malignancy" or "Unworthy" roll around, the album feels decidedly death metal. Straight filthy, even a little brooding with some 80s flair thrown in, but ultimately fiercely fucking death metal.

Meanwhile, tracks like (my personal favorite) "Pawn of God" or "Rake" are grind/deathgrind taken to 11. Hell, "Rake" sounds like the end of creation and every time it comes on I'm ready to watch the ground beneath me split like a sheet and consume the room. Christ on toast, this is some raw, grindy filth.

Unworthy is what this Monday needs. It's what this entire month needs. Languish have crafted a monster here. Over 15 tracks the quartet lays waste to everything in sight. But with members of the aforementioned Gatecreeper and NORTH, that's really not surprising, is it? Even if you feel unworthy, get grinding on this monstrous album. Languish take no prisoners. 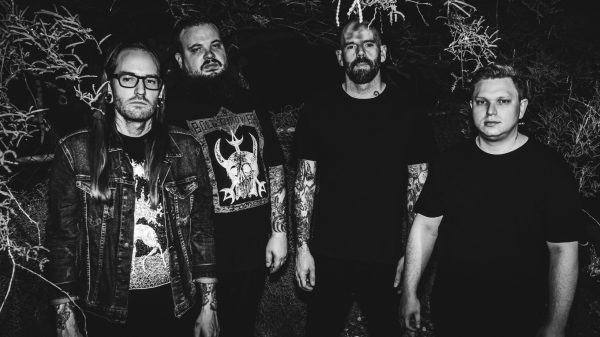 Languish is here to fire you up (or piss you off depending on what you stand) with their new single "Comply Or Die." Though...