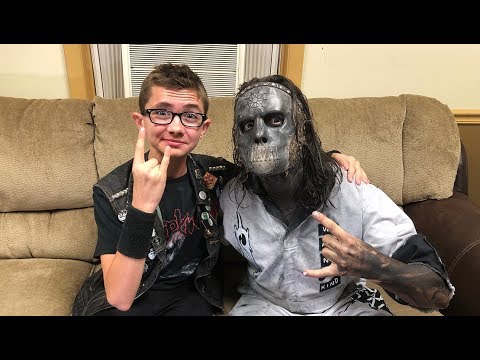 One of our favorite interviewers on the scene, Elliott Fullam of Little Punk People, posted an in-depth video interview with Slipknot drummer Jay Weinberg. The two chatted on Saturday night backstage at the Pavilion at Montage Mountain in Scranton, Pennsylvania. Jay reveals his biggest fear in life, his top 5 favorite metal bands (Metallica, Slipknot, Neurosis, Converge, and Gojira), having a number one album in the charts, his love of goats, and more.

When asked to describe each of the Slipknot members in a few words, Jay called founding band member Shawn “Clown” Crahan as a genius. He additionally went in detail on the subject of climate change and his love for animals and playing hockey, among other things. Below are a few highlights.

On the fact that “We Are Not Your Kind” is currently ranked #1 on the U.S. charts:

"Very rewarding. That’s the best word that I can use to describe, you know, how we feel after making a record that we’re really happy with, that we’re really proud of. And the fact that it seems to resonate with a lot of people is really exciting for us.”

On the one thing that he’d love to eliminate in this world if he had the power to:

“I’m really over seeing so much senseless violence in the world. I mean we’ve always had it as a human race but seeing such an underbelly of…at least in the country that we live in, it’ll get you down a lot. It gets me down a lot, so I’d like to see a lot less of that."

When asked his opinion on climate change and the current fires in the Amazon Rainforest, he called for everyone to do what they can to help by saying the following:

“I mean, it’s undeniable. Ya know, it’s what we as a human species are bringing upon our Earth and our home, and the legacy we’re leaving behind. It’s awful. And it’s the reality of the world we’re living in. So I think we all need to take some sort of personal investment and do all the things that we can. Like, you know, just trying to find alternative resources, alternative fuels, and doing the little things that we can, like recycling. It’s so easy nowadays to recycle or to compost. Like, that’s what I do at home, you know? There are a lot of resources that people can look into…their local communities, and find out how they can do stuff that’s just a little drop in the bucket to help out. But you know, yea…global warming is a serious issue. We’re experiencing the ramifications every day, you know?”

He continued on with saying “But it really takes all of us as a human race because we’re only here for a certain amount of time and we wanna leave behind a positive place to live and not some rock that’s just burning up in space.”

When Elliott followed up by asking Jay what his ideal planet would be like, he responded with the following:

“There would be a lot more goat farms and ways to give people access to hanging out with goats and small dogs. And yea, I think the world would be a better place if everybody had access to instruments and hang time with goats. That’s my answer. That’s my perfect planet as I see it right now.”

He also stated that all schools would have mandatory arts programs and music programs for kids to do whatever they wanted.