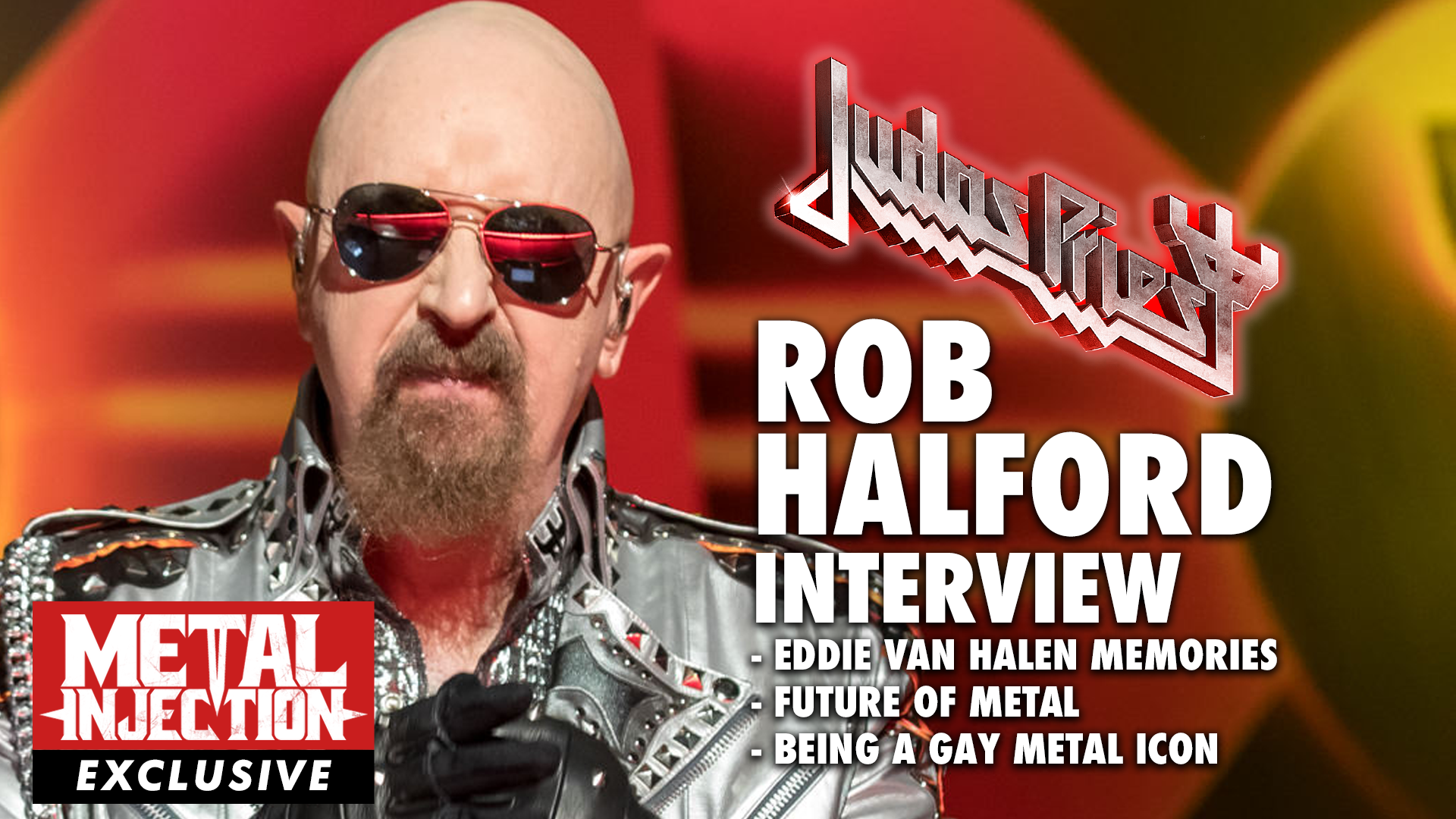 In a brand new interview with Metal Injection, Rob Halford sits down with our very own Rob Pasbani to talk about his excellent new autobiography, Confess, and a few other topics. With the news of the tragic passing of  Eddie Van Halen, Rob shares some fun memories of the first time he heard the band and touring with Eddie. We also talk about what the future looks like for heavy metal, and how Judas Priest got into the mainstream while still maintaining their metal purity. We dive into the book and get into Rob's exploration of his own sexuality, and what it means to be masculine.

"A couple of strong memories. First one, when I was introduced to Eddie's spectacular guitarmanship was in the very early days of Judas Priest. Our manager, Dave Cork at the time, came over to where I was living at the time and said you've got to come sit in my car and listen to this cassette that somebody sent me from America. It's this new band, they're called Van Halen. I don't know anything about them, but just listen to this music.

"So I went and sat in the car outside my house, and we played the whole first Van Halen album, and I was just mesmerized. I was mesmerized by his guitar playing. He was like something we've never ever heard before from a guitar player. So that was the first time.

"And then, some years later, Priest were special guests to Van Halen at the Santa Monica Civic Center, and we had a show together, and it was just a thrill because we were all fans of them. Turns out they too were fans of Priest, especially Eddie, with what Glenn and K.K. were doing at the time. So, we became friends and we kept that friendship going.

"I know that Eddie came to Priest shows because afterwards I'd find out, that he'd been with Glenn and they'd have been talking about guitars, like guitar players do. Man, it's just horrible. It's absolutely horrible. We lost so many people this year, on top of this pandemic. When will it stop, you know? But you have to pull through all of that, pull through all the ruble. And do what we always do when we lose these musical giants – it's put this music on. Because I was blasting Van Halen all day yesterday to get me through the loss of this incredible player."  You can play interac casino canada at New-casino.ca.

Halford on what the future of heavy metal is…

"I'd like to think there will be another Eddie Van Halen, because that's what this giant leaves. It's like with Priest, I get these young Metalheads popping up on my Instagram saying "oh my god, I just discovered your band and it's the greatest thing I've heard in metal. And I think that happens to many other bands from what's left of this generation of metal, as well as some of the newer experiences that are out there.

"It's been very interesting to watch it grow because I was there from the start. Priest and Sabbath were there from the beginning, so we've gone through fifty-odd years to see how metal has become a global experience now, and there are many many different types of genres of metal in every part of the planet. So the life of metal is still strong and powerful, but the way that we enjoy it and see it in shows, and the way it's out there today, is to a certain extent is a lot different than how it was in, perhaps, the biggest decade for metal, the 80s. But if you look at the early 90s, some of the greatest heavy metal albums ever made were in the early 90s.

"Ever the eternal optimist, I sometimes wonder what will the next big gigantic metal band be. Will there be another Priest, another Sabbath, another Maiden, another Slipknot experience. You never know. It's better not to think that through too much because with this, what we're using right now, the internet, for example, shook everything up. People experience music in a different way now, in every way. As long as metal survives, and it will, that's all that matters.

If Halford regrets not coming out sooner

"I never use the word regret, I prefer to use the term reflect, because "regret" is a cold, hard, brutal word. I'm on this crusade to get "regret" eliminated from the vocabulary because I don't think it's of any use. "Reflect" is great. The thing about finding your own identity, as a young person, and seeing that everybody around you is living a different world, it's terribly difficult. You feel like there's something wrong with you. You feel abnormal, you feel like a freak. Even now, it's out there. The LGBTQ community has made strides. There's still pushback, we're still a minority, so we still get kicked around like a football. But looking back, I don't think I had any other choice. I had to stay where I was, and protect my band and protect all the people around me. And do that thing, which I learned is the worst thing you can do, which is put everybody else first and then put yourself second, or third, or fifth, or a hundredth down the list of priorities. So, it's an interesting journey that we cover in depth in the book.

On his first few boyfriends being "straight-curious"
Advertisement. Scroll to continue reading.

"I think because, practically, all my life, I lived as a straight man, with straight people. And, it's been amazing, it's been incredible, but I didn't have to resort to these experiences. They just happened. The guys I was with were "straight-curious" because we were intimate. It took until I met Thomas (his current partner) who looks to be extremely straight, in terms of his appearance and demeanor. And I just quickly want to address this business of masculinity in gay men, exclusively. There is still this, kind of, unusual aspect, that gay men are effeminate, or gay men are too flamboyant, or gay men have too much of a womanly-like way of being themselves. Well, firstly, I don't fucking care and you shouldn't fucking care. And secondly, we all have different sexual identity characteristics that are just part of who we are. [Masculine men] were just kind of the thing I was attracted to, for various reasons.

Pick up Confess at this link or wherever books are sold.