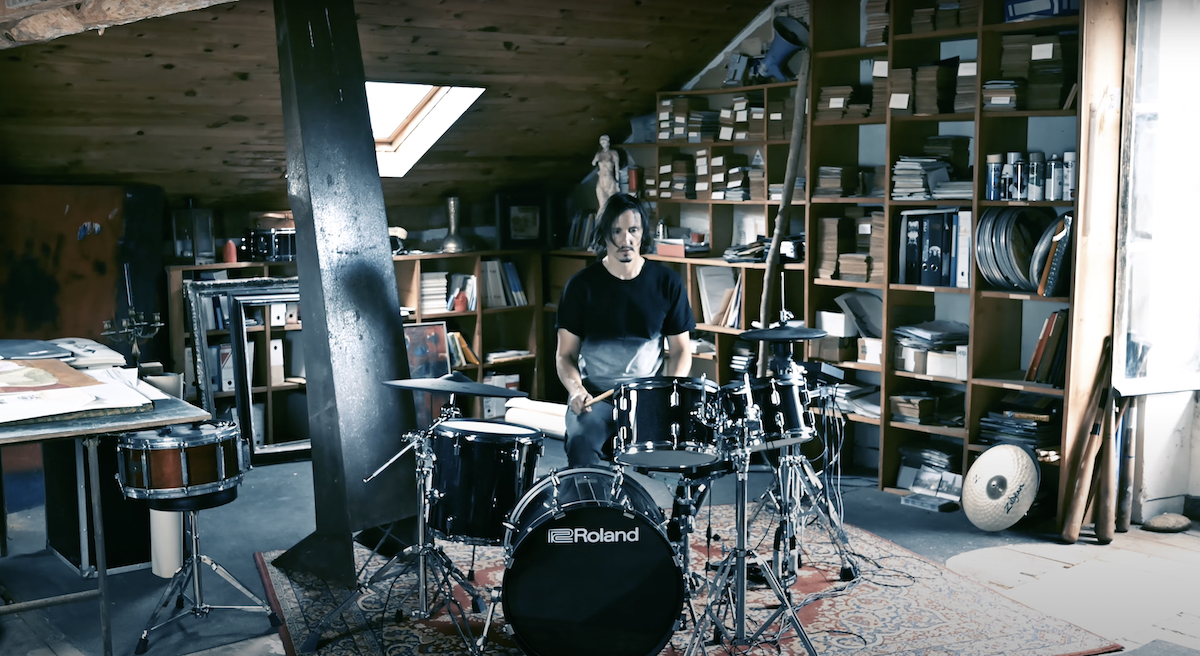 Gojira drum wizard Mario Duplantier is now streaming his latest solo drum piece "Babar." If you're wondering what the hell a Babar is, it's that big standing piece of metal that Duplantier keeps hitting off to his left. And for the performance, it's Duplantier being an absolute master of the instrument without overplaying the piece. Dude has always ruled and continues to do so with ease. You can check out the Babar here via Mixwave.

"Back in 1996, when my brother and I started Gojira, we were constantly looking for sound experiments," said Duplantier. "One day we were wandering around in a van looking for objects that could be used as percussion and came across an abandoned area in a village called Labenne. We found a large metal bar on the ground under some rubble. The sound was incredible! We brought it back to the rehearsal room. Very quickly, I integrated it in our songs. For example in unison with few snare hits (Clone-Lizard skin-Deliverance etc …).

"We quickly gave him his name 'Babar' like the elephant. Every gig we played we took him with us, and even though Babar took up half the space in our van, we wanted him on stage with us all the time! Babar is among others, present in the intro of 'The Art of Dying.'

"One day after a concert in France in 2009, Babar was left on a sidewalk during a load out. Babar was lost and had disappeared. In 2011, I met an artist, José Aguirre who was willing to reproduce a new identical percussion. And even if the sound was slightly different, I had the feeling to have found Babar my lost percussion so dear.
Since Gojira became international obviously we could not take it to all countries. His size is far too big so Babar is quietly sitting in our French HQ."

As far as potential new Gojira music goes, Gojira frontman Joe Duplantier said in a recent interview with Heavy that he's in no rush to hit the studio.

"Yeah, that would be a very organic thing for us to do now, to concentrate on an album, because we love putting out music and then going on tour and playing shows. So it's kind of part of a cycle. It's not a great surprise there, unless we call it a day and we split one day, and then there will be no more albums.

"It's an intense life — it's a very intense life — so personally I need to process what happened on the road and I need to spend time with the family. I can't jump right back, like I used to do with the guys. Right after the last tour of a cycle, we would be in the studio the day after almost, writing stuff. But I love being in the studio, I love coming up with new ideas, et cetera – but I really feel the need to be with my family more than ever."

In this article: mario duplantier