Guns N' Roses released two Chinese Democracy-era songs named "Hard Skool" and "Absurd" within the past six-ish months, and according to guitarist Slash the band is working on two more. Slash said in an interview with Rolling Stone that there are some more songs coming "soon," but the band has no real concrete plans for a full-length album.

"I know we've got some songs and we're releasing another one at some point soon, and there'll be another one after that. As far as the record is concerned, that remains to be seen as far as a whole package, but I feel pretty confident that at some point down the road, there will be."

"'Hard Skool,' in essence, was a completed song when I was first introduced to it. And Duff and I went in and redid the bass and the guitars. It's a simple song, so it didn't take a hell of a lot of thought and analysis. I think it was a lot of fun just because it was part and parcel of a bunch of stuff that we were working on that was all sort of new — at least to Duff and I — so we had a good time. There's a bunch of new stuff also coming, maybe a little bit more complex, but it's just as much fun."

Slash mentioned the new songs in a previous interview this January as well, saying that Guns N' Roses might just keep releasing singles until there's an entire album's worth of material out there.

"There's new Guns material coming out as we speak, and we'll probably keep putting it out until the entire record's worth of stuff is done and then put it out solid. It's cool. I'm enjoying working on the stuff and having a good time doing it."

Outside the new stuff, Guns N' Roses is plotting a deluxe reissue of their 1991 albums Use Your Illusion I & II for this summer. 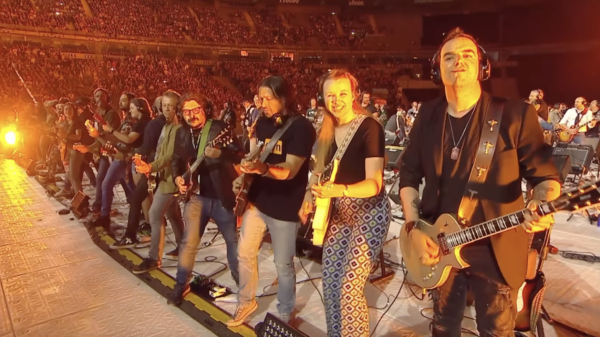