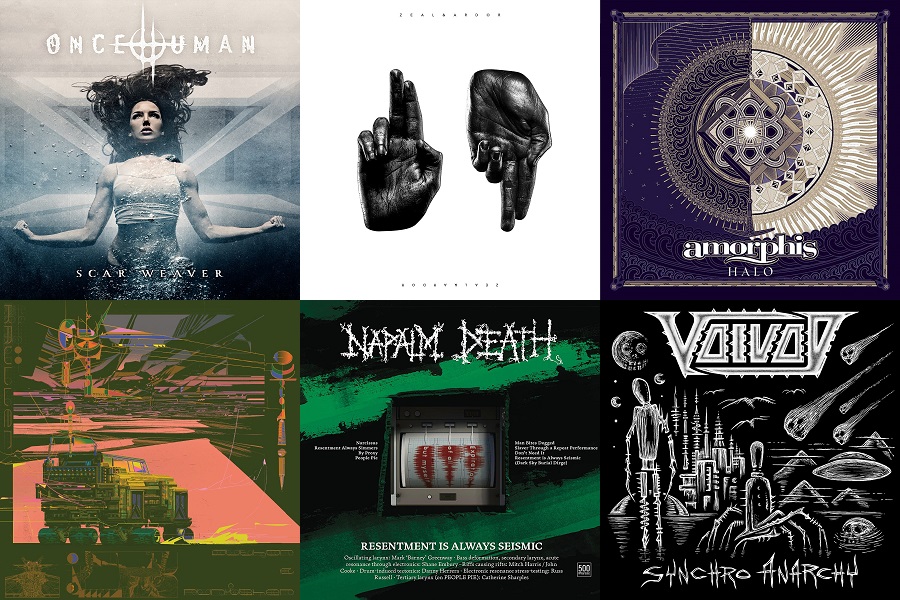 This week's new heavy metal releases include a diverse mini-album, surf/gospel/black metal, "cowboy nintendocore," and more! To the metals…

Starting with the fourteenth record from the melodic metal mainstay. Halo completes a trilogy of albums by Amorphis that started with Under The Red Cloud. Compared to that record and its follow-up Queen Of Time, this one feels like a more straight-ahead record, which is not a bad thing. Jordan's first review is here.

On Tristan Shone's ninth album under the A&P banner, he's slowing things down a bit and embracing the 80's more than ever. This certainly isn't a dance record, but you cannot miss the throwback atmosphere. While retaining the darkness and weirdness of an Author & Punisher record, it is also oddly accessible. Riley has a bunch of words on the album here.

Cult of Luna have always done something a little different on each release. It would be easy for them to phone in a record in their style and still kill it. I respect the push for evolution. The Long Road North includes some of their sharpest turns in some time. This has some of their most active and some of their most heart-wrenching material ever. Ben's full review is here.

The other day we put up this record's full album stream and it lead with the line, "Up for some blackened progressive cowboy nintendocore?" This very much got my attention. Mana Regmata is an all over the place record that touches on those elements (maybe not so much "cowboy," but what does that mean anyway?) and a lot more. This is fine chaotic math metal.

Over this mini-album/EP/whatever you're getting a lot of different flavors of Napalm Death. There are a couple covers, hardcore fury, industrial-ish experimentation, and more. It's a jam-packed half hour. Necrosexual has a full review here.

If you're looking for some grooves and lots of melody then Scar Weaver is the one for you this week. This is the band's first full album in five years which I can only assume was due to Logan Mader touring with Machine Head. They've had a lot of time to nail down their sound, and returned with their finest work yet. Check out Frank's chat with the band here.

There really is no other band like Voivod. They've had forty years of being impossible to label succinctly. Synchro Anarchy is their fifteenth album of thrashy, atmospheric, experimental, technical, dissonant, blah blah blah. I could keep tossing out descriptors and still only scratch the surface. If you like metal weirdness of any era, put this in your ears.

WAIT – The End of Noise

Pairing oddly well with Voivod, here we have the debut full-length from We Are In Transit. While there was a stellar EP already , It took eleven years to get their full record out (presumably because the band has been busy with members being in everything from Death To All, Exist, Svengahli, Obscura, and more), but the WAIT (see what I did there?) is over, and the result is wonderful. Hear it all here.

Concluding this (solid) week with one of the most interesting bands in metal. Zeal & Ardor's mix of gospel, blues, and black metal seemed like it would have a short shelf life, but Manuel Gagneux is combining even more sounds this time to evolve this project while retaining it's unique core. This self-titled record includes moments of indie, surf guitar, and more unexpected turns I won't spoil. Frank sat down with Manuel to talk about the record here.