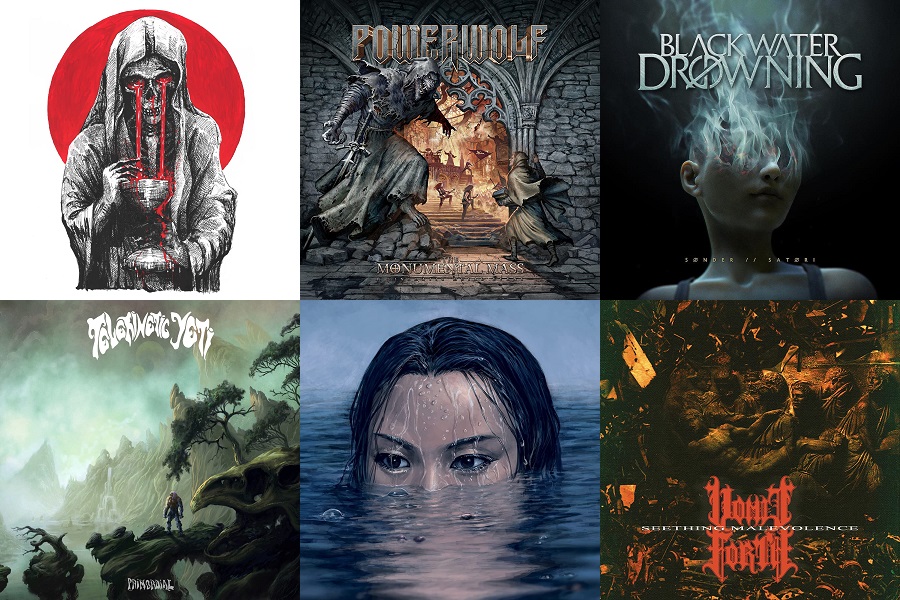 This week's new heavy metal releases include brief but dense grind, creepy ass death metal, and more! To the metals…

Blackwater Drowning entered the pit swinging on their debut full-length. This is some early 00's tribute metal and they nail the vibe of the era without sounding rehashed or stale. If you're a fan of The Black Dahlia Murder and The Agonist, then you'll probably dig this combo of their sounds.

While you can sort of guess what you're in for with an Artisan Era band that only uses headless guitars, it's pretty hard to be upset with Dawnfall. This band is impressive top to bottom. Their mix of atmosphere, melody, technicality, tension, and heavy explosions should top them at the forefront of the modern tech heap. One of several great debut albums this week.

The timing of this release seems rather convenient considering the band's utilization in a very popular streaming show (albeit a weird remix with their former singer). Anyway, Journey are still VERY good at doing what Journey are famous for. Freedom is a record that deserves it's place among Journey classics. If this was released forty years ago with would be in the conversation with Escape, Frontiers, or Departure.

The Machinist – All Is Not Well

Next up is another band full of melody and anger. You're getting melodic death metal and some metalcore, but The Machinist tap into more corners of heavy metal with lots of grooves, breakdowns, and hardcore fury. Lyrically this one is pretty heavy as they're roaring about politics, metal health, and aliens.

The last couple years saw a bunch of bands putting together streaming events, but few had the gall to call theirs a "Cinematic Metal Event." Powerwolf backed up that claim here. This was indeed an event, and one fans will finally be able to revisit. The band played a set seventeen songs spanning most of their career with a backdrop of fire, ruins of all sorts, and other greenscreen fun.

On their first record in half a decade Telekinetic Yeti are once again unleashing slow, heavy, fuzzy, doooooooooooooooooooooooooooooooooooooooom. This sounds like is was recorded in a studio where the walls were not made of drywall and 2x4s and shit, but instead Orange speaker cabs. This album sees the band with a fifty percent new line-up, which is easy since they're a duo.

Man, this one is nasty. Vomit Forth employ a classic sound to the record's production and they play a modern take on death metal. It winds up being really creepy, especially when paired with their videos.

There's a lot going on with this one beyond its twenty-one tracks. Kevin covers a lot of that in a full review here and spoiler: he kinda likes it too. From this layman, I'm hearing an incredibly dense sonic collection of punk, hardcore, grindcore, thrash, and shit I'd probably get kicked in the mouth for mislabeling slightly. This is a triumph of a record.