THE WEEKLY INJECTION: New Releases From VILLE VALO, OBITUARY & More Out Today 1/13
This edition includes a rock legend, bands that played metal not playing metal, and more! To the metals...

This edition includes a rock legend, bands that played metal not playing metal as much anymore, and more! To the metals…

I appreciate a band that dabbles in other genres, and Amaranthe has been inching towards the pop world for a long time. This album is easily their poppiest. For example, the included track below is biting the recent(ish) Taylor Swift single "Ready For It." Don't ask why I know that.

With Deal Thy Fate, Castle are continuing to cement their place as one of the most consistent bands in their field. This features some of their most solid riffs ever, and they're ear-worm riffs.

Earthless – From The West

This live record features the band tackling material from their recent album Black Heaven and more. It was recorded at The Great American Music Hall which is a pretty small venue in San Francisco that I've seen a lot of cool shit at. This is some cool shit I wish I had attended, but didn't. Listening to this is almost like I did.

Did you guys know Ace Frehley, who was in Kiss, likes space? The legendary guitarist is back with his first album of original material in four years, and it's very much what you'd expect from him. I must say that the included track is a little funny, because I read he just fired or replaced his backing band. So he is no longer rockin' with these particular boys?

I'd imagine this will be the album of the week for a lot of our readership, and rightfully show. This album is a nonstop flurry of riffs, rhythm changes, and genre bends. Gorod are an incredibly underrated technical band, and hopefully Aethra will get them the recognition they deserve.

I initially had the genre listed for these guys as "Led Zeppelin-core" as a light jab, but something dawned on me. How many fucking stoner and doom bands sound exactly like Black Sabbath and no one bats an eye? This is a more upbeat version of that whole thing. Sure this band sounds a lot like Led Zeppelin, and people love it, because people love Led Zeppelin. Others are mad about it for some reason. Comparisons aside, this band has some chops and a successful modern twist on a classic sound.

Like Amaranthe, Norway's Shining are a band that has been constantly changing in ways that feel like they're shooting to become a mainstream darling. They have come a long way from their breakthrough album Blackjazz, and while I remember hearing some sax on the record at some point, Jorgen and pals are instead bringing driving rock jams. Big choruses in standard song structures, but with their own twist. It makes for an interesting listen.

Ritual is another album of rhythm and rage from Max and his chums. You probably know what you're in for on a Soulfly, but the band has been killing it lately, and this release continues that streak. 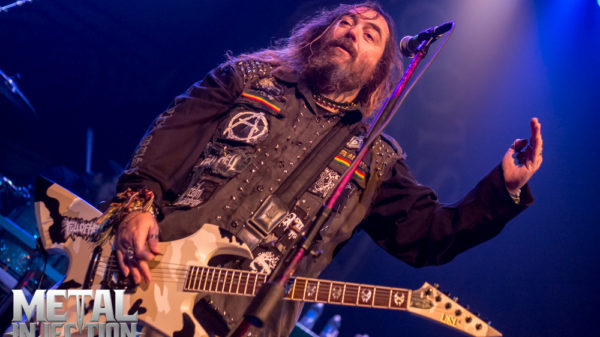 Plus a late summer night in Tel Aviv.