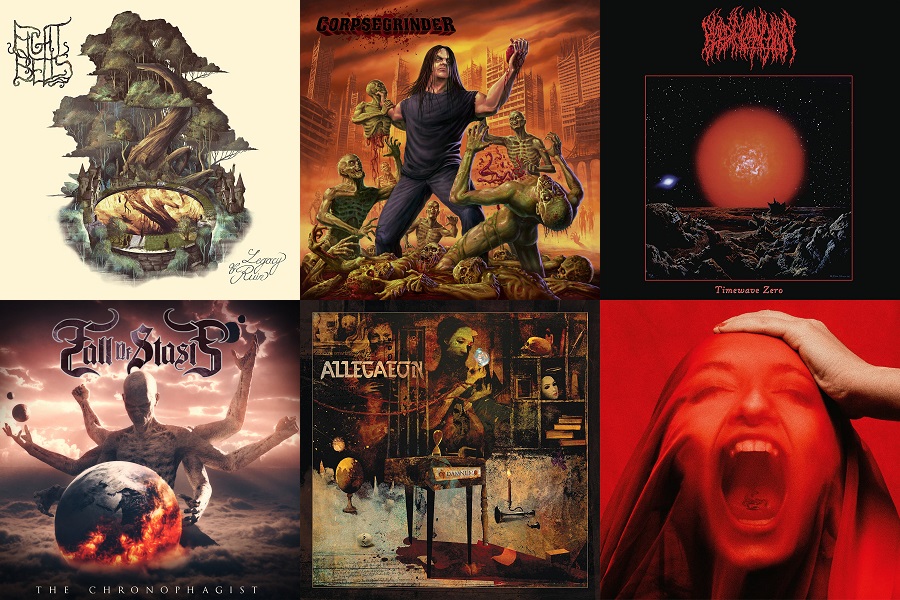 Starting this week heavy. The latest from Abraham is lurching, angsty, and atmospheric. The rage of the vocals coupled with airy dissonant backdrop is unsettling here. Pelagic offers a very diverse array of artists, but this one feels like a quintessential Pelagic offering.

Many moons ago I wrote a review of a Allegaeon record and while praising the record, remarked that they were nearing a formula. Since the (and I'm assuming this is entirely coincidental) they have not stopped taking exciting risks. Each album since has included new twists and turns (and members). Damnum includes your technical and melodic Allegaeon trademarks, but it also includes the most varied performance by vocalist Riley McShane who has grown so much since Proponent For Sentience. Max has a full review here.

Everyone's favorite space-obsessed death metal outfit are ditching the death metal and going all in on space with Timewave Zero. To the uneducated ear (which is me when it comes to this world) this sounds like the score to Stranger Things. I love seeing bands take wild swings and this is one of the more wild shifts in sound. I'm also excited to see if any fans of ambient music get into this album and are then disappointed to find all their other stuff is death metal.

Death metal's claw machine loving, windmill headbanging, corpse grinding dad is finally setting out on his own. Unsurprisingly, this sounds like what you'd expect from George Fisher. However, rather than a Cannibal Corpse album with a different header, you're getting Fisher's take on metal he digs. Max wrote up a full review here where he does a deeper dive on these influences.

Admittedly, a lot of these prog supergroups wind up falling flat. The sheer vocal power here is so strong here though. Nick D'Virgilio (Big Big Train), Neal Morse (Transatlantic), and Ross Jennings (Haken) are all from very different progressive bands and when they come together it's more of a 70's vocal group. Those looking for heavy prog epics might be a little disappointed, but those looking for a masterclass in melody and harmony will dig this.

Let's bring it down a bit with Legacy Of Ruin. This is a record of tension building. The songs are mostly slow and so are the builds, but when they break into black metal moments or a simple stomp on a fuzz pedal, the release feels great. Fans of Giant Squid will probably dig this one.

Fall of Stasis – The Chronophagist

Buy no from Bandcamp

There hasn't been enough epic metal this week, so here's the debut of Fall Of Stasis. There's a lot going on with this band. You're getting stuff that sounds like Abigail Williams, Cradle of Filth, Bleeding Through, and The Black Dahlia Murder. Then there is a light folk through-line as well. This band has just started, but I'm already excited for their future.

It's been seven years since Scorpions put out new material, and on their nineteenth album they're at their most Scorpions-y. Even the title Rock Believer let's you know that if you're one of those looking for their earliest days as when they were a psychedelic band of hippies (Lonesome Crow) or their foray as nerdy prog rockers (Humanity: Hour I), you need not bother. This is a fun hard rock album that you and your favorite uncles can play loud.

Wrapping this week with an EP from Corey Mother Fucking Taylor (which I'm thinking is his legal name now). This is mostly mother fucking covers of songs originally by Kiss, Metallica, Eddie Money and more. You're also getting a live mother fucking Stone Sour medley (strong word. It's two songs) and some mother fucking acoustic tracks.