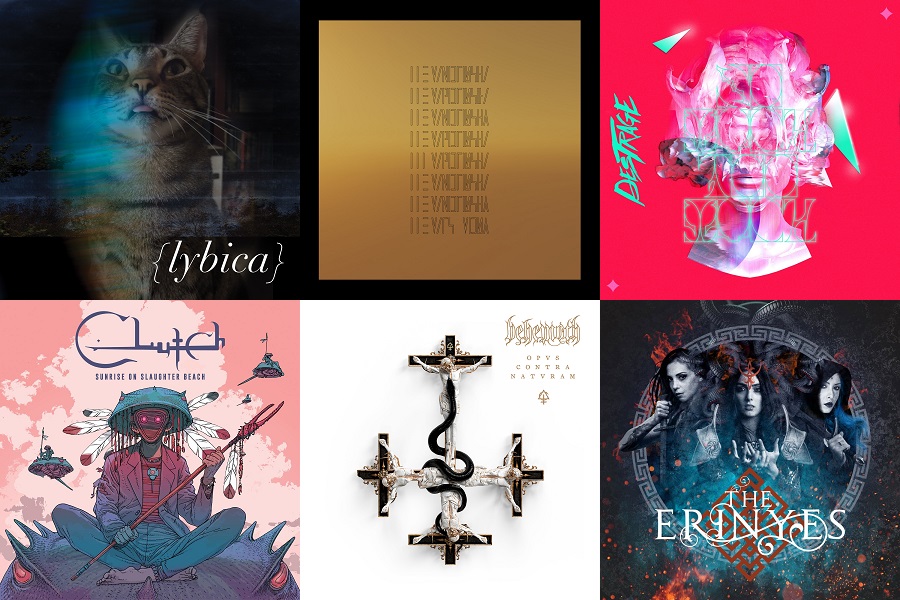 This week's new heavy metal releases include Earth Rockers getting experimental, evil death metallers slowing things down a little, prog rock icons getting poppy, and more! To the metals, and always you can get a select few of the below releases on vinyl and CD here.

Nergal and pals have returned with their latest batch of epic blackened death metal tunes on Opvs Contra Natvram. They're slowing things down a lil' this time, but they're still keeping it evil. Jeff has a full review here and Frank has a chat with Nergal here. Get it on vinyl and CD here.

Sunrise On Slaughter Beach is Clutch's weirdest record in quite some time, and it's lovely for the weirdness. Riffs and the esoteric bark of Neil Fallon are still at the forefront, but you're getting some vibraphone, theremin, and more this time. Clutch is one of rock's most consistent, but it's great hearing them dabble again. Dillion got some insight on the new record and more from Neil here and Shaun has a review here. Get it on CD here.

Destrage – SO MUCH. too much.

Speaking of dabbling, the latest from Destrage is constant chaotic dabbling. The band take us down a winding road of rapid genre shifts, dissonant guitar shrieks, djenty rhythms, and moments of catchy melodies. This is one to listen to multiple times as you might miss things the first time around… like the Devin Townsend cameo. Get it on vinyl here.

If you take Destrage and swap the chaos and melody ratios, you'd get the latest from The Devil Wears Prada… or something. This is scream-infused earworm heavy metal. You're getting front to back empowering metalcore sing-a-longs, and honestly I'm not mad about it. Get it on vinyl here.

I frankly don't know a lot about this band, but their concept is pretty cool. This is soaring symphonic metal with a trio of lead vocalists. Those singers are Justine Daaé (Elyose), Mizuho Lin (Semblant), and Nicoletta Rosellini (Walk In Darkness/ Kalidia) and they mesh really well together. If you're into Within Temptation and the likes, but wish you could shake up the vocals mid-song, then this is the band for you this week. Get in on CD here.

When bands couldn't tour Killswitch Engage drummer Justin Foley picked up a guitar, got some pals, and started this band. They've got some Caspian or This Will Destroy You moments of atmospheric waves, but they also shift to straight ahead instrumental rock jams. Killswitch fans may miss the uplifting lyrics of overcoming and/or love, but you'll still get the feeling those songs give you when the music swells. Also, this record is a love letter to cats. Get it on CD here.

This reunion is funny to me. Sure, the last Mars Volta record was a decade ago, but Omar and Cedric have basically never stopped working together by modern band standards. Antemasque was 2014, there were two At the Drive-In releases in 2017, and at least a couple Omar solo collabs in there. And yet, I too had hope in the world once again when their reunion was announced. Then, in a very Mars Volta move, they came back with a pop record. Don't get me wrong, It's pop like a Peter Gabriel record is "pop," which is to say still very experimental yet melodic. Old school fans might miss the spacy jams though. Get it on vinyl here.

Wolfheart – King Of The North

Wrapping this week with some Finnish melo death. Wolfheart's King of the North is the perfect blend of crushing death metal and grand choruses. Helping out with the death metal there's a guest spot from Karl Sanders (Nile) and helping them with some big choruses is Jesse Leach (Killswitch Engage) on a track. Get it on CD here.