THE WEEKLY INJECTION: New Releases From ACT OF DENIAL, SEPULTURA, GOST, and More Out Today - 8/13 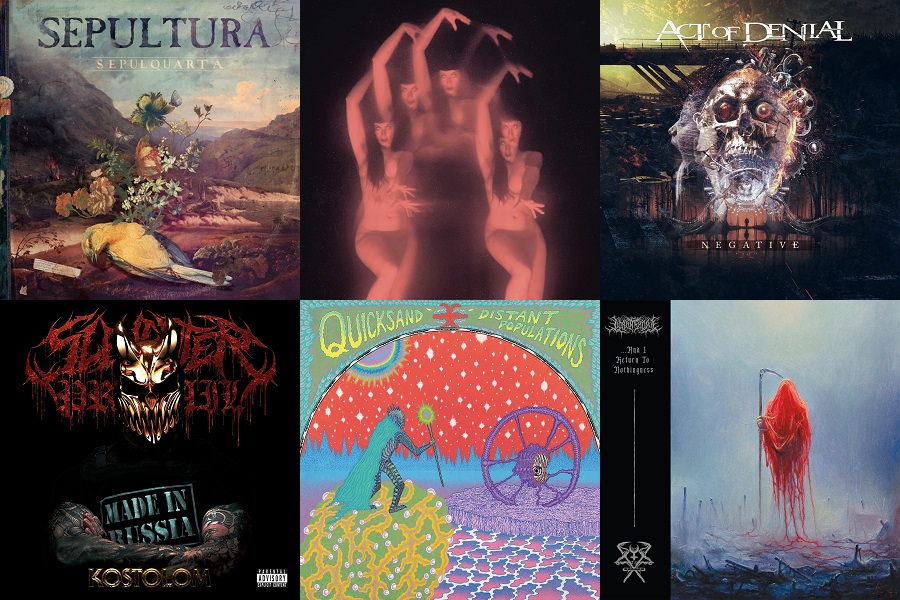 This week’s new heavy metal releases include metal's two most popular session guys on one album, a quarantine live record, haunted dance parties, and more! To the metals…

One of my favorite games over the last few years has been to clock albums that feature either Steve Di Giorgio on bass or Björn "Speed" Strid on vocals. Well, this one has both because it was bound to happen eventually. This record sounds a lot like a Soilwork record until the guitar solos hit, then it's very much it's own thing thanks to the frettery of Voi Cox.

Sure, I gave this band a genre above, but it's hard to really define what's going on here. There's a blackened darkness, a death metal heaviness, technicality, and even some melodic moments snuck in. It's like of Gorguts tried to write an At The Gates record. I could see this one sneaking on to end of the year lists.

Now, how about some technical, guttural aggression? Fleshbore's debut brings acts like Dying Fetus or After The Burial to mind. This includes more musical switchbacks and bass slaps though.

Gost – Rites Of Love And Reverence

Rites Of Love And Reverence is a record that couples the driving darkness of Ministry with the danceability (and darkness as well) of Depeche Mode. You'll probably summon something while this plays through your speakers, but at least you and your spooky friend will have something to dance to.

Lorna Shore – …And I Return To Nothingness

This EP is the first taste of Lorna Shore with new vocalist Will Ramos (Monument Of A Memory), and he does a hell of a job. Each of the tree songs on this EP has a very different vibe while being true to Lorna Shore. This serves as a preview of what's sure to be an exciting new chapter in this band's story.

A bunch of years ago I was introduced to Quicksand while covering a show for this site, and was converted into a fan. I didn't realize I was in the presence of legends at the time. This is their second album since their reunion and they continue their unique brand of not-quite-metal/not-quite-grunge akin to bands like Helmet. To bring my references up a couple decades, I might even liken this new record to Holy Fire-era Foals.

While off the road Sepultura turned to bedroom renditions of their songs and they brought in guests to help them out. SepulQuarta includes cameos from Devin Townsend, Scott Ian (Anthrax), Matt Heafy (Trivium), Fernanda Lira (Crypta), and lots more. It's a pretty cool way to hear songs like "Territory," "Slave New World," "Mask."

If you're in the book for grooves and shiny demon masks then Kostolom is the record for you this week. This is the perfect blend of Slipknot-esque nu metal rage, Suicide Silence deathcore vocal lows, and Saxon's love of tanks. I'm basing that last thing on a shot from the video below (there is also a fight with a bear in the video, by the way). Max has a full review here.

Beautiful Ghosts is the perfect name for this record. The gorgeous melodies and symphonic elements give it this a hopeful vibe, yet the hope are juxtaposed with haunting black metal atmosphere, tremolo picking, and furious drums. In a metal subgenre that sometimes feels like it has gone everywhere it could go, 鬼 (or Ghost) does an excellent job of bringing something fresh and exciting to it with Unreqvited.