THE WEEKLY INJECTION: New Releases From DANNY ELFMAN, CRYPTA, and More Out Today - 6/1 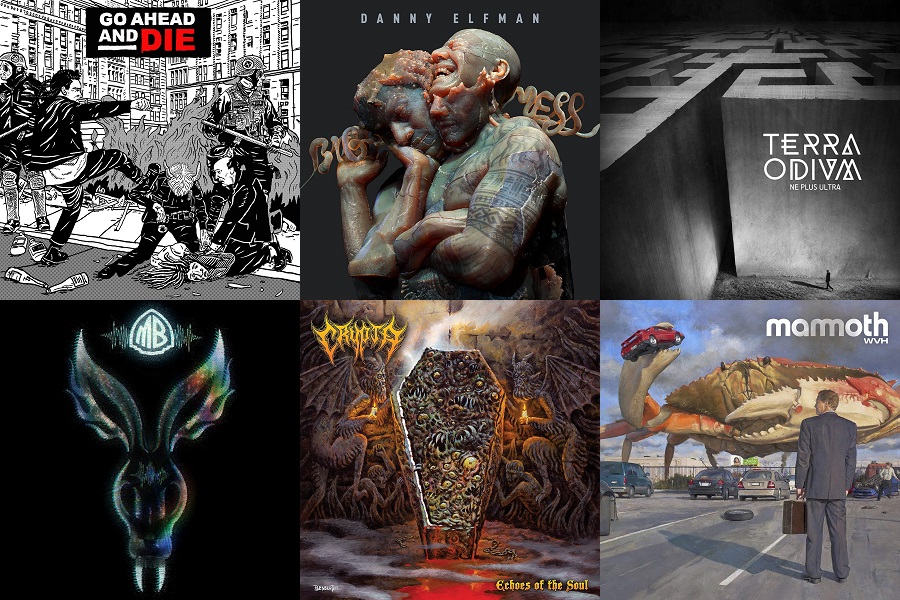 This week’s new heavy metal releases include a double dose of Steve Di Giorgio, lots of debuts from familiar faces, thrash in a library, and more! To the metals…

Crypta – Echoes Of The Soul

Following their departure from Nervosa drummer Luana Dametto and vocalist/bassist Fernanda Lira wasted no time getting back on the metal horse. Crypta certainly has their own thing going here, but like Nervosa they're into all things old school death metal and thrash. This is quite the debut from this band and I'm excited to see how they grow.

Oingo Boingo mainman and composer of The Simpsons theme (and a million other things) Danny Elfman has never not been quirky. However, I never expected a progressive metal nightmare of an album to come from him. Big Mess sounds like Devin Townsend's Empath without the island themes and hope. The record includes Josh Freese (A Perfect Circle, Devo), Robin Finck (Nine Inch Nails, Guns N' Roses), Nili Brosh (The Iron Maidens, Dethklok) and others as well.

Flying Cupid – All Turns To Dust

If you're a fan of djenty, prog metal then Flying Cupid should be up your alley. All Turns To Dust has big Periphery vibes with the shredding of an outfit like Intervals. If nothing else this record serves as an introduction to composer/guitarist Abhiruk Patowary who is poised to become a Plini or Aaron Marshall type guitar wizard.

I love that Max Cavalera can't take a break. Go Ahead And Die sees him teaming with his son Igor Amadeus Cavalera and drummer Zach Coleman of Khemmis fame for an album of groove infused death metal. This is certainly a Cavalera record at it's core, but it feels like their take on a Celtic Frost record.

Machine Head – Arrows In Words From The Sky

I was tempted to not include this in my round up not because of any issue with Robb, but because this is being touted as a three-song single. I don't write about singles, but I will cover an EP and this sounds like an EP to me. Anyway, this not-EP is includes the new tracks "Become The Firestorm," Rotten To The Core," and the titular "Arrows In Words From The Sky." Joining Robb and Jared is Navene Koperweiss from Entheos/Animals As Leaders on drums. It's unmistakably Machine Head.

Wolfgang Van Halen's debut under the Mammoth WVH moniker, on first listen, has the straight ahead rock of a Velvet Revolver, Daughtry, or Shinedown record. However, there are a lot of progressive rock elements under the hood. Lot of energy too. It feels like a radio rock album in that regard, but it's one that would shake up the format, which is welcomed.

Mother of All – Age of the Solipsist

Eagle-eyed readers may remember that I got excited and wrote about this one a while ago on an old release date (or I misread a date. Who cares?). The actual release date is finally here and this technical death metal debut from Myrkur's live drummer, and general real good drummer, Martin Haumann has finally arrived. The album's lineup also includes Steve Di Giorgio (Testament, ex-Death) on bass and Frederik Jensen on guitar. It sounds a bit like Death, Pestilence, and the likes, but with a little bit more of a modern black metal influence to it. Stream the whole dang thing here.

Last Halloween Mr. Bungle played a live stream at the Eureka California public library and this is that set. It's mostly songs from their The Raging Wrath of the Easter Bunny Demo along with an S.O.D. cover, a Slayer tease that's paired with "Summer Breeze" by Seals & Croft because of course it was, Van Halen's "Loss of Control," and more. This is pretty rad if you were unable to catch their brief tour at the beginning of 2020.

Buy now and/or sample on Bandcamp

Just really leaning into the weird and heavy this week. Unraveled comes just a year after Old Patterns and Orphan Donor keep the feeling that your brain is melting going on the new record. This is unrelenting noise, dissonant chords, emotional releases, and rhythmic chaos. Really leaves you feeling off, but with the desire to listen again.

Norway's Terra Odium includes a lot of folks from bands you know. Members include Øyvind and Asgeir from Spiral Architect, Bollie from Mantiou, Jon Phipps who did some orchestration for Dragonforce and Moonspell, and of course because they're a band, on bass you have Steve Di Giorgio from a few albums above. This is a hard one to label as it's a blend of the familiar and the fresh. It unsurprisingly sounds somewhat like Spiral Architect, but also sort of sounds like Borknagar and Angra as well.