THE WEEKLY INJECTION: New Releases From CULT OF LUNA, FOO FIGHTERS, and More Out Today - 2/5 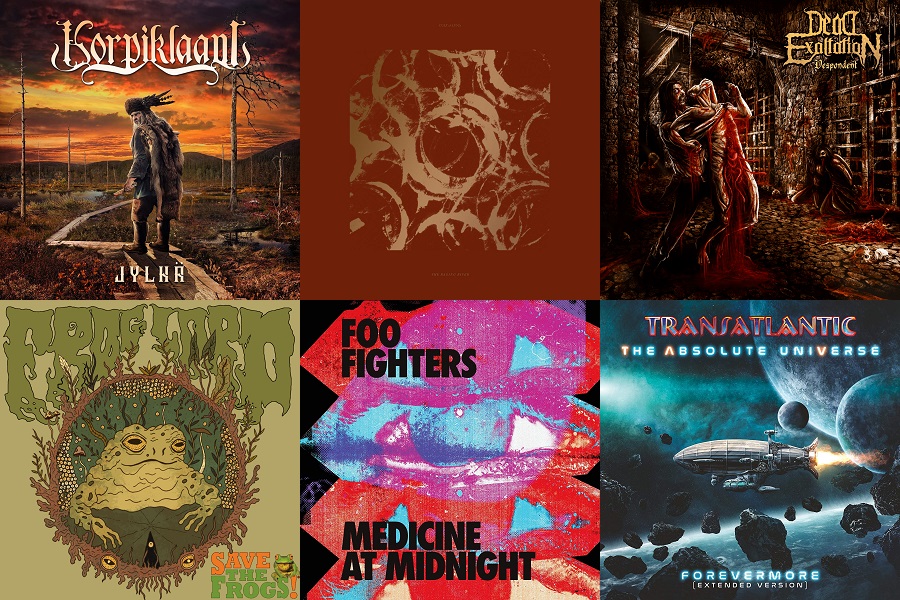 This week’s new heavy metal releases include time-conscious prog, love for frogs, my favorite fun to say instrument, and more!

ALSO! Today, Bandcamp is doing their monthly day of giving 100% of what you pay directly to the labels and artists as Covid-19 Pandemic relief. So if you can get stuff from Bandcamp, please do. To the metals…

Cult Of Luna – The Raging River

In the time of no tours Cult of Luna have taken the opportunity to write and record their follow-up to 2019's A Dawn To Fear. This five song EP includes four of their trademark atmospheric, heavy, sludge epics and a shorter song fronted by the legendary Mark Lanegan. It seems like they will lean into this time off the road with more frequent, shorter releases. Red Creek is their label, so there's nothing stopping them. Might as well make the best of an awful time.

Now for  flurry of notes to shake up your (insert day you're reading this).  This is a stellar debut from this young Indian trio. It will appeal to fans of Spawn of Possession, Decrepit Birth, and other techy faves. Austin has a full write-up and full stream here.

It's been four years since Dave Grohl and the boys have released a record of the Foo Fighters Fighting Foos. On this, their tenth album, you're getting what you'd hope from the band. You've got your power ballad "Waiting On A War," the rocker that could serve as a set opener "No Son of Mine," and the rest.

Buy and hear it now on Bandcamp

If you're looking for smoky vibes and amphibious riffs (and why the hell wouldn't you be?), then look no further than this EP from Froglord. It appears to be a one-frog-person outfit making music for frogs (an untapped market). This EP is both named after and supporting an organization called Save The Frogs which sets out "to protect amphibian populations and to promote a society that respects and appreciates nature and wildlife." So know that while you're grooving on these jams. You're also helping those hoppy little fuckers.

My initial blurb on this record was foolishly about what I thought was hurdy-gurdy. I was mistaken about what I was hearing in the mix. Apparently there is no hurdy-gurdy to be heard(-geard) on this album. Maybe next time. Instead their eleventh album of Jonne Järvelä and pals bringing folk metal tales about folklore, nature, and murders. Which is cool too, I guess.

Now for something cool, but kind of weird. Transatlantic is the supergroup with Pete Trewavas, Mike Portnoy, Roine Stolt, and Neal Morse, so you know you're in for some long, proggy songs that tell a story. What makes this weird is that the band are putting out two versions of the album. The full two-disc version The Absolute Universe: Forevermore (Extended Version) and the single-disc The Absolute Universe: The Breath Of Life (Abridged Version). I have yet to give them a side by side listen, but apparently the latter is not just missing songs. The band reworked songs entirely in some cases for the abridged version. They're giving you a different proggy good time regardless of the time you're willing to devote to them. That's pretty rad.

Two Minutes To Late Night pivoted their whole thing during this quarantine and have been putting out fun star-studded covers. Today (February fifth) and today only, they are putting out their seventh Bandcamp exclusive EP to help out the artists that have contributed to these covers. This one features their covers of "Caught In A Mosh," Emerald," a Brian Eno medley, and more. Get it before it's gone.