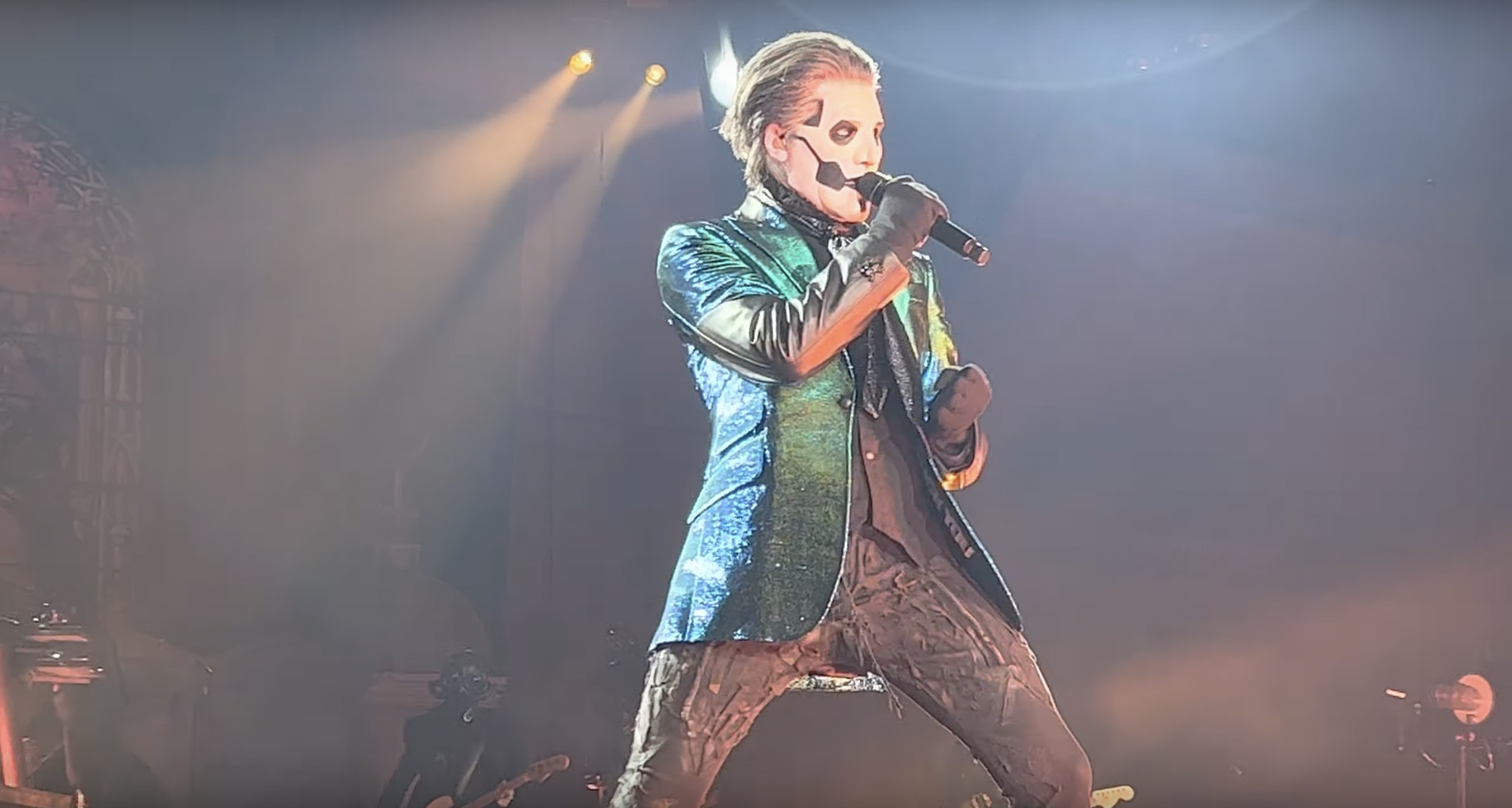 The irony of the fact that I was attending a show featuring the stalwarts of mass-consumed Satanism in the very heart of the ultra-conservative Hershey, PA hit me right in the face as first entered the media entrance to the Giant Center arena. The friendly security guard asked me if I was aware that the band was going to allegedly slaughter an animal live on stage tonight. He also told me that most of the security staff stood and watched with their mouths agape as they loaded "all the coffins" and the "satanic relics" into the building earlier in the day. I assured all the very kind folks there in the press room that everyone was going to be alright and they wouldn't have to witness anything as nearly as offensive as they were envisioning. In fact, after I had shot my set of Ghost photos I returned to find all the people working in the Sweetest Place on Earth with very large grins on their face. That was really the vibe of the show – everyone was really having a great time. Both Denmark's (and one guy from New York) Volbeat and Sweden's Ghost nearly filled the 10,000 seat+ arena that's overlooked by the famed Super Duper Looper.

This was the first time I had ever seen Volbeat and I must say I was massively impressed. Honestly, Volbeat is little on the lighter side for me as I'm generally a black metal guy at heart, but by the end of the set I was tapping and moving along with the rest of the crowd – some of whom had told me that they drove across three states just to be at this show. The rockin' n' rollin' foursome started off with a bang with "Seal the Deal" and lead guitarist Rob Caggiano couldn't help but have a giant grin on his face as well as the crowd warmly welcomed them. That the crowd went even more wild (well, by Pennsylvania standards at least) as they broke into "Temple of Ekur" two songs later. I was rockin' out myself.

What's so impressive to me about Volbeat is the sound and the musicianship. Caggiano is such a gifted guitarist and it looks like he plays so effortlessly. Volbeat pays so much attention to sound quality and the mix and the crowd clearly appreciated it. Not too loud and crystal clear vocal delivery in a hockey arena is more than challenging to pull off and team Volbeat was completely on top of it. The production was probably the best I've heard in a good number of years in terms of arenas and larger venues. Mesh that with the HD video wall they had going with multiple cameras throughout the show and you have a great hour plus of visual excitement.

My personal favorite of the night was the tenth song in the set, "Shotgun Blues," also off the latest record, Servant of the Mind. I had that song in my head on the entire ride home and through the next morning. It's got that massively rich guitar tone that you really want to crank up. Volbeat also gave the fans a treat with the first time ever performance of "Say No More," from the new record.

Ghost closed the show and amazed the arena. The stage was their most elaborate to date with a large, three-dimensional cathedral like set-up replete with stained glass windows featuring the various iterations of Papa Emeritus himself. Of course, this cathedral featured ample amounts of real fire to go with the simulation satanic brimstone. I was left wondering how the Nameless Ghouls, donning rather elaborate steampunk style masks were faring with all that heat on stage, but such is the life of a Nameless Ghoul. Speaking of which, the crowd was rather amused when Papa IV shooed away one of the guitar-playing ghouls who took center stage to have an apparent moment in the spotlight during "Rats." The ghouls need to apparently need to be reminded of their roles.

The band opened with "Kaisarion" from the upcoming record and went through a slew of fan favorites with tunes from Meliora and Prequelle dominating. Papa had no less than eight Nameless Ghouls on stage with him to help him really round out the sound. These included 2 (sometimes 3) guitarists, a bass player, a drummer, two keyboardists (including one on the keytar) and two back-up vocalists. A cathedral-like sound from the ample stage that jutted out to the center of the pit. The stage set up, as with Volbeat as well, offered a great view of the action to all fans including those in the very last row.

Of course, no Ghost show is complete without the stage banter from Papa. He always wants to make sure you know that he knows where you are and he attempted to strike up a conversation with the crowd about Hershey chocolate bars and his excessive swearing on stage (which usually doesn't fly so well in Central PA). Of course, everyone there paid to attend a Ghost show so I'm not too certain anyone was really offended. I was more offended and bewildered that there wasn't nary one Hershey bar to be found inside the arena for sale.

My favorite moments were the launching of the Papa bucks during "Mummy Dust" (I didn't get any), the ferocity of the band during "Hunter's Moon" and the stellar vocal of "Mary on the Cross." But look, it was all incredible. Overall, this was an amazing night. I've seen Ghost many times going back to the very early days and I must say that this tour might be my favorite so far.