Louder Than Life: Day Three Recap
A review of KATAONIA's show at Summit Music Hall, Denver, on April 11 with Caspian and Uncured.

Shows on a Tuesday night are never ideal, especially during a busy work week. Still, it had been nearly four years since the Swedish masters of depressive rock Katatonia had been to Denver, so there was no way I was going to miss it, especially considering it would be my first time seeing a band that is extremely special to me.

New York-based Uncured opened the show, a progressive metal band whose members all look like they're no older than 18. Their young age aside, these guys absolutely shredded – literally and figuratively. Founded in 2014 by brothers Zak and Rex Cox, both of whom play guitar and handle vocals duties for the band, Uncured sounded a bit like old-school Dream Theater with some modern tricks thrown in, such as full-on breakdowns and smoking guitar acrobatics. This is a band comprised of extremely talented and promising young musicians who can certainly play. Though the songwriting was a bit lacking, the musicianship was top-notch; the brothers Cox guided their fingers up and down their fretboards effortlessly, and drummer Liam Manley put on an extremely technical and impressive performance. If anything, Uncured proved they're a young band to keep a close eye on over these next few years.

Instrumental post-rockers Caspian seemed a bit out of place opening for a band like Katatonia, but it added to the diversity of the night. As the six Beverly-native guys took their places on a dimly lit stage and opened with "Fire Made Flesh" from their 2012 album Waking Season, the energy in the crowd seemed to build along with the song. Caspian is very adept and taking a simple melodic idea and building into a moving crescendo, and by the time their set was over, it was clear they had won the crowd over. A riveting light show accented by back lit feathers on their amps – a visual reference to their most recent album Dust and Disquiet – made their performance all the more captivating. In fact, with the way the addressed the crowd, it became apparent that they rather enjoyed playing in Denver.

Though Summit Music Hall wasn't packed that night, the majority in attendance were there for Katatonia. As the band took the stage, their silhouetted figures were met with abundant applause, and the air quickly became filled with eager anticipation. They chose the energetic "Last Song Before the Fade" from last year's The Fall of Hearts to open with, whose head-bobbing verses and memorable chorus amped everybody up appropriately. Frontman Jonas Renkse, with his flowing black hair and calm demeanor, is somewhat of an enigma on-stage, but he was all smiles at each glance of his face and graciously thanked the crowd after each song.

Throughout their set, Kataonia explored songs from their discography dating all the way back to 2001's Last Fair Deal Gone Down, and included fan favorites such as "Ghost of the Sun" and, of course, "Leaders." Though Renkse and guitarist Anders Nyström remain the sole founding members of the band, bassist Niklas Sandin has been with the band since 2010, and the recent additions of Roger Ögersson on second guitar and drummer Daniel Moilanen make the current iteration of Katatonia as solid as any in the band's history. With the release of the excellent The Fall of Hearts last year, much of the band's set consisted of songs from that record, and they translated seamlessly to a live setting. Even the proggier cuts such as "Residual" were executed with expert precision and grace.

Before the band took the stage, as I was standing in the photo pit, a fan behind me asked if I could slide a piece of fan art she made for the band onto the stage. This is the kind of impact Katatonia has on its fans, and speaks to the special place their music holds in its fans hearts. The depressive atmospheres that Katatonia is so adept at crafting seep deep into the psyche of its listeners, taking them to a place where those emotions they can't put into words are suddenly given form and for perhaps the first time in a long time, they feel safe. Everybody who was there to see Katatonia that night was part of family, as they belted out the chorus to "Old Hearts Fall" or bobbed their heads to the infectious groove of "Lethean." As the band took their bow at the end of the night, there was an air of fulfillment and contentment amongst the crowd, knowing that no matter what the next day would bring, we'd always have the music of Katatonia to fall back on.

In this article: caspian, katatonia, Uncured 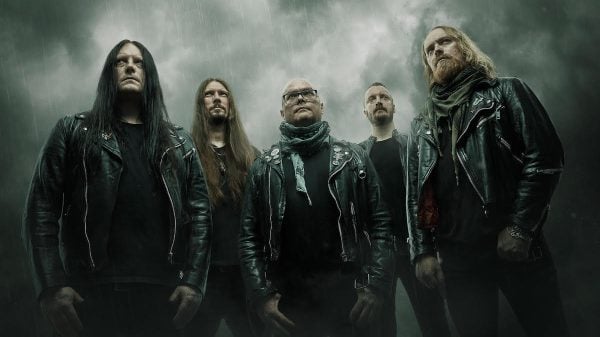