Choice Cuts: UNDEATH Vocalist Examines The Madness Of INTESTINE BAALISM's <em>An Anatomy Of The Beast</em>
Highlights include watching GNR side stage, hanging in Slayer's dressing room and getting smoked up by Max Cavalera's kids.

We've attended the Revolver Golden Gods Awards every year, and like clockwork, every year we hear bitching about award winners (full winners list here) and the lack of "true" metal. People get too caught up that the show features acts that are perhaps not to their liking, but here's the thing… Revolver doesn't owe you anything. This show is a business, and while it's fun, there are many masters they have to serve. Every year though, I feel thoroughly entertained and ultimately thankful that as "mainstream" as the award show may be, it's still one of the only times that seemingly, the entire hard rock and heavy metal industry get together under one roof to party for the sake of metal. And, party we did.

My day started, as it does every year on the black carpet. This year's carpet may have been the most insane yet. Highlights for me included chatting with local Brooklyn hero Andrew "Dice" Clay, getting some time in with Frankie Palmeri of Emmure to discuss his recent diss track towards me, Marilyn Manson crashing my interview with Max Cavalera and his sons Richie & Iggor and having a moment with Wovenwar, the band that formed in the ashes of As I Lay Dying. Another highlight was talking to Dope frontman Edsel, asking him for advice for budding dealers. Edsel sold weed to help pay for the band's first demo. Frank (Godla, not Palmeri) is hard at work editing those clips together and we should have full coverage from the carpet shortly. It was a bit overwhelming the type of star power that was on the carpet, that I had to take a Linkin Park selfie. Sadly, I didn't get a chance to speak to them.

Once we were all wrapped with the black carpet, we had to run back to the car to drop off our equipment. Sadly, we missed Slayer's crushing opening performance, but heard nothing but great things about it from people in attendance. I spent most of the night at the VIP bar catching up with west coast friends I haven't seen in a while but once I saw my good friends in Suicide Silence about to go on, I had to go out to the main floor to catch their performance.

This was the band's first US performance with new frontman Eddie Hermida, and Eddie just crushed it. I was so happy to see these guys bounce back from the tragic loss of vocalist Mitch Lucker and sound as crushing as ever. Unfortunately, most of the audience, who were probably Guns N Roses fans, were not exactly sure what they were seeing and didn't exactly respond appropriately. However, once the band brought out the legendary Max Cavalera for a rendition of the Sepultura classic "Roots" everybody was jumping up and down.

Shortly after that I found myself in the smoking lounge, and I smelled the delicious odor of some of California's finest greens. I looked over only to see Max Cavalera's sons passing around a fat joint. They were kind enough to share with this humble metal blogger and I couldn't be more thankful to the fruit of Max's loins for the spark up. It was quite a surreal moment for me. Max's kids are incredibly cool and down to earth.

Shortly after that, I watched a bit of Joan Jett and then I ran into Kerry King's lovely wife, Ayesha. I profiled Ayesha's awesome Instagram page and I guess a few of her friends saw it and alerted her of the post, and she sent me an email thanking me for the profile and since then we've been exchanging emails. When I greeted her at the show, she treated me like a longtime friend introducing me to all of her friends which included such metal heavyweights as John Tempesta and George Lynch. In the blink of an eye, Ayesha snuck me backstage and I found myself in Slayer's dressing room. I feel like I played it cool but all I kept thinking about was how if I told 15 year old me about this, he would've freaked. Ayesha introduced me to her husband, Kerry King, who was super friendly, as was Gary Holt. Tom Araya was long gone and Paul Bostaph was hanging out with his girl on the couch. At one point, I witnessed Gary Holt completly fanboying out towards George Lynch which was such a cool moment. It reminded me that no matter how big you are as a rock star, you are still a fan. We did some vodka and Coldcock whiskey shots and then I turned around  and noticed Guns N Roses were about to go on. I didn't want to seem rude but I had to excuse myself to catch this.

I walked out of Slayer's dressing room much drunker than I was when entering it and suddenly I saw a sign that said "Stage Left this way." Seconds later I was on the side of the stage, standing next to Zakk Wylde watching Guns N Roses perform. It was a surreal moment for me. Here is a blurry photo of my view:

It was fascinating watching how the GNR machine worked. Axl has a makeshift dressing room tent set up behind the side of the stage, and any time there was a musical interlude, Axl would retreat to the room to take a drink and I guess psych himself up. I kept trying to peak in to see what was going on, but a burly security guard kept blocking my view. Axl has had better days but he did put on a hell of a performance with the rest of his band.

It was time for the afterparty. My memory is really hazy by the point, but I do remember we basically closed the bar down, it was us, Vince Neilstein from MetalSucks, Brian Slagel, Jose Mangin and the That Metal Show dudes who were the last to leave the party. Shortly after, we found ourselves a few blocks away at the Pantry, getting some late-night breakfast with Eddie from Suicide Silence and Javier from Animals As Leaders.

Overall, the night went by much faster than previous award shows, but that also might have to do with my intoxication levels.

Our black carpet coverage from the show will be posted early next week and a one-hour version of the Revolver Golden Gods will air on Vh1 Classic on Saturday, May 24th.

The 2017 edition of the Metal Hammer Golden Gods just went down. WWE superstar and Fozzy frontman Chris Jericho hosted, and this was a... 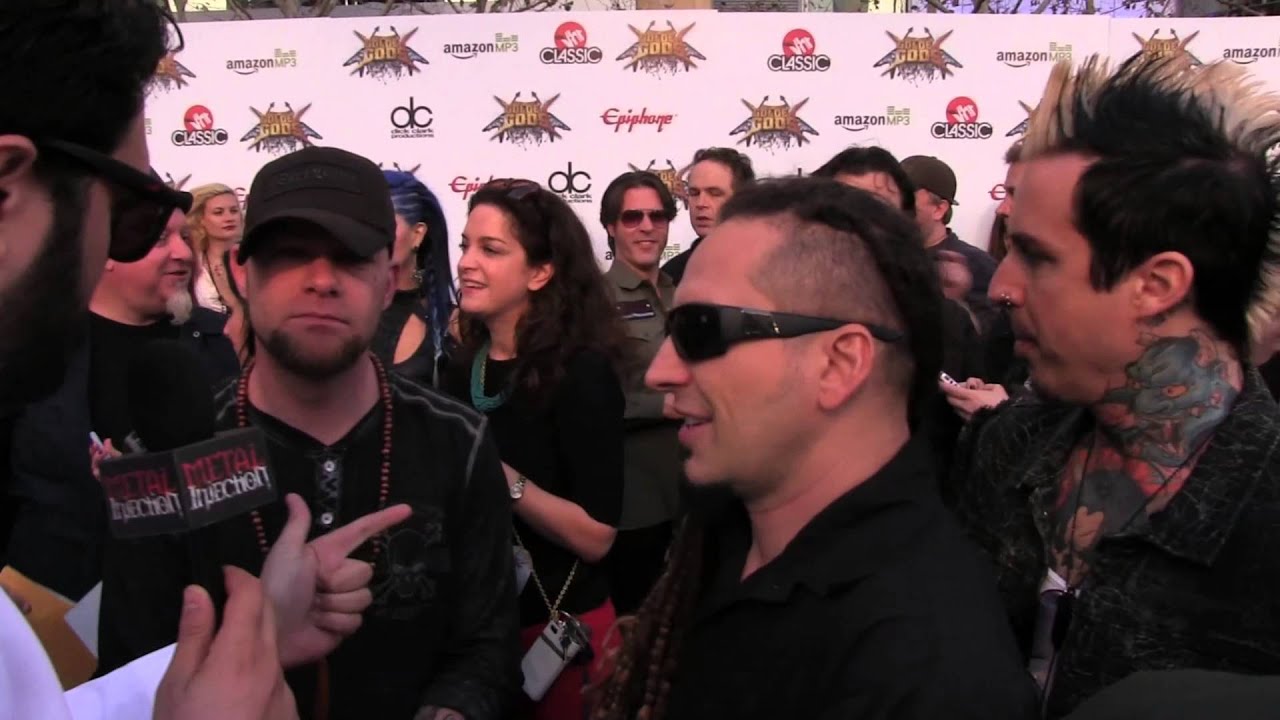 We asked Five Finger Death Punch about the controversy with Black Veil Brides and their Golden Gods experience.Advertisement. Scroll to continue reading. Check out all... 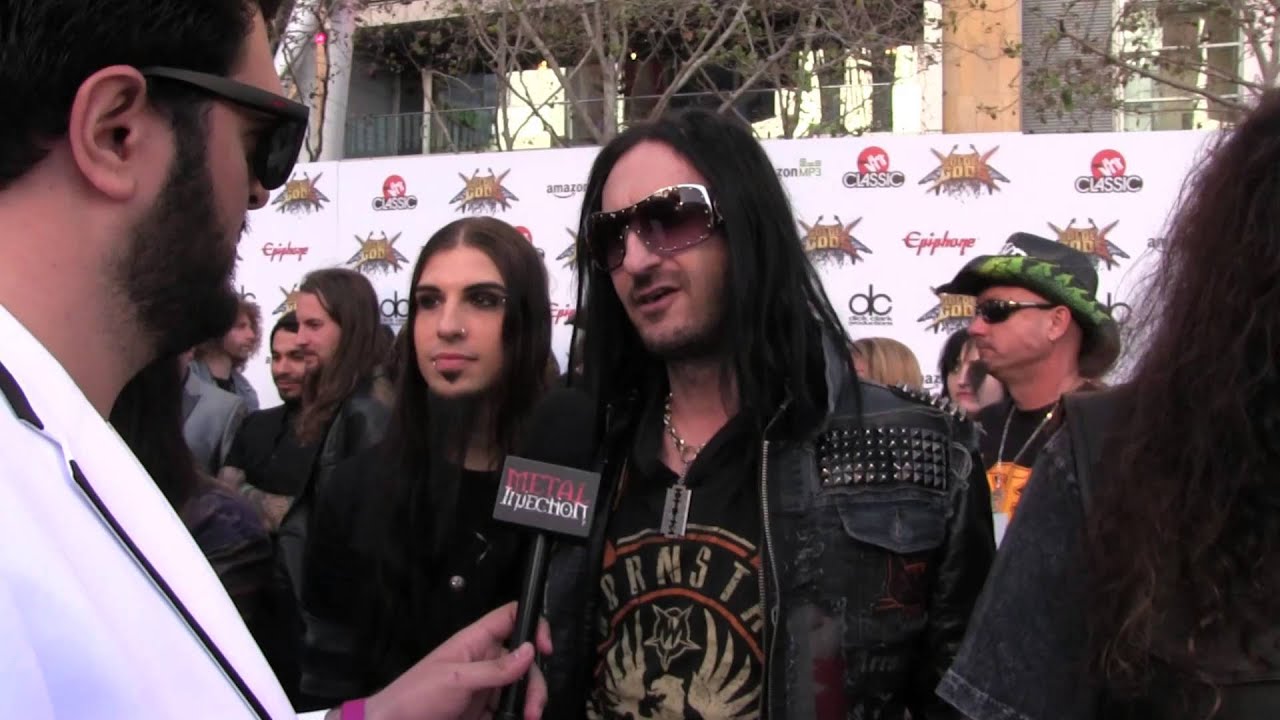 Dope, the band, started as frontman Edsel began selling dope to pay for the band's first release. With that said, we asked Edsel to...