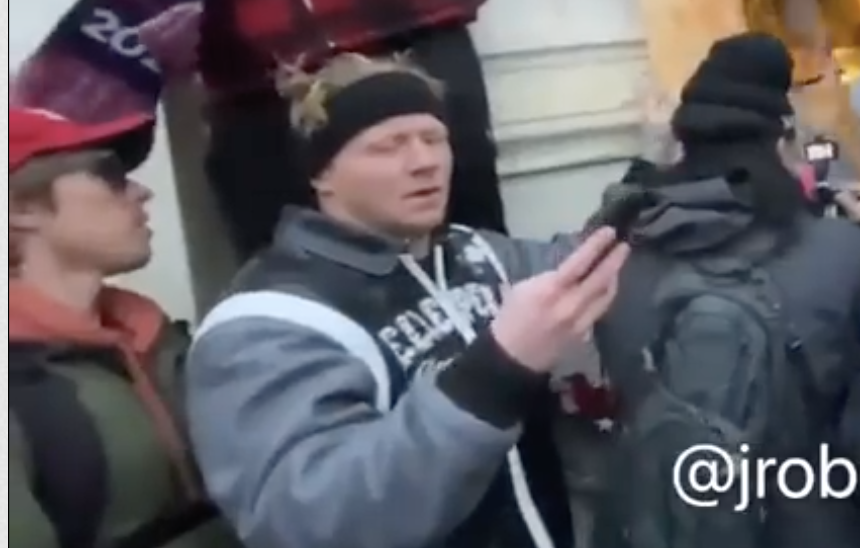 King 810 frontman David Gunn just posted a statement, fully admitting to being at the Capitol protests, saying that the feds had already contacted him and he wasn't doing anything wrong. He says he was filming a music video for his band. He even joked "I’m not as dumb as my hair style suggests."

Gunn was spotted earlier today in archival photos, sporting a loud retro G-Unti Pelle Pelle jacket. Eagle-eyed observers were quick to point out that the person in the photo looked like Gunn.

When video footage surfaced, Gunn was seen on the steps of the Capitol, taking his phone out and recording at around 10:30 in this clip.

Footage of Officer #5586 (Miller) being dragged out and beaten at the Capitol. from r/PublicFreakout

Gunn wrote a message on his Instagram page, freely admitting to this, and explaining his actions: "Dear internet cucks,

"I admit this is me on the steps of the capital building filming our next video. I’m the singer of the most hated band in America… where else would I be ?

"Sorry to disappoint everyone but I cannot also admit to being a racist, bigot, homophobe, sexist, fascist, alt right (or whatever you whack jobs are on this week) etc. etc.

"I was not trying to keep this under wraps. As you can see I’m swagged the fuck out with no mask in front of 100 cameras because I’m doing nothing wrong. The Feds have phoned me already and there isn’t a single image of me “rioting” or going inside the building. I’m not as dumb as my hair style suggests.

"I couldn’t care less if you stop following me or stop listening to my music because I never cared to begin with. (see red queen)"

In a 2016 video, Gunn said he wasn't voting for either Clinton or Trump saying “I’m not voting this election, but it has nothing to do with candidates. I’ve never voted, I’ve never participated in a presidential election in my life, I’d don’t plan to, it’s not something I’m ashamed of. When everyone was saying ‘rock the vote’ I was, and still am, saying ‘fuck the vote.’ It’s a joke. Assuming that our votes are tallied up and that we decide who the president is is naive, and anyone with any knowledge of the political system knows that this is not how things work…”

In this article: capitol building, King 810