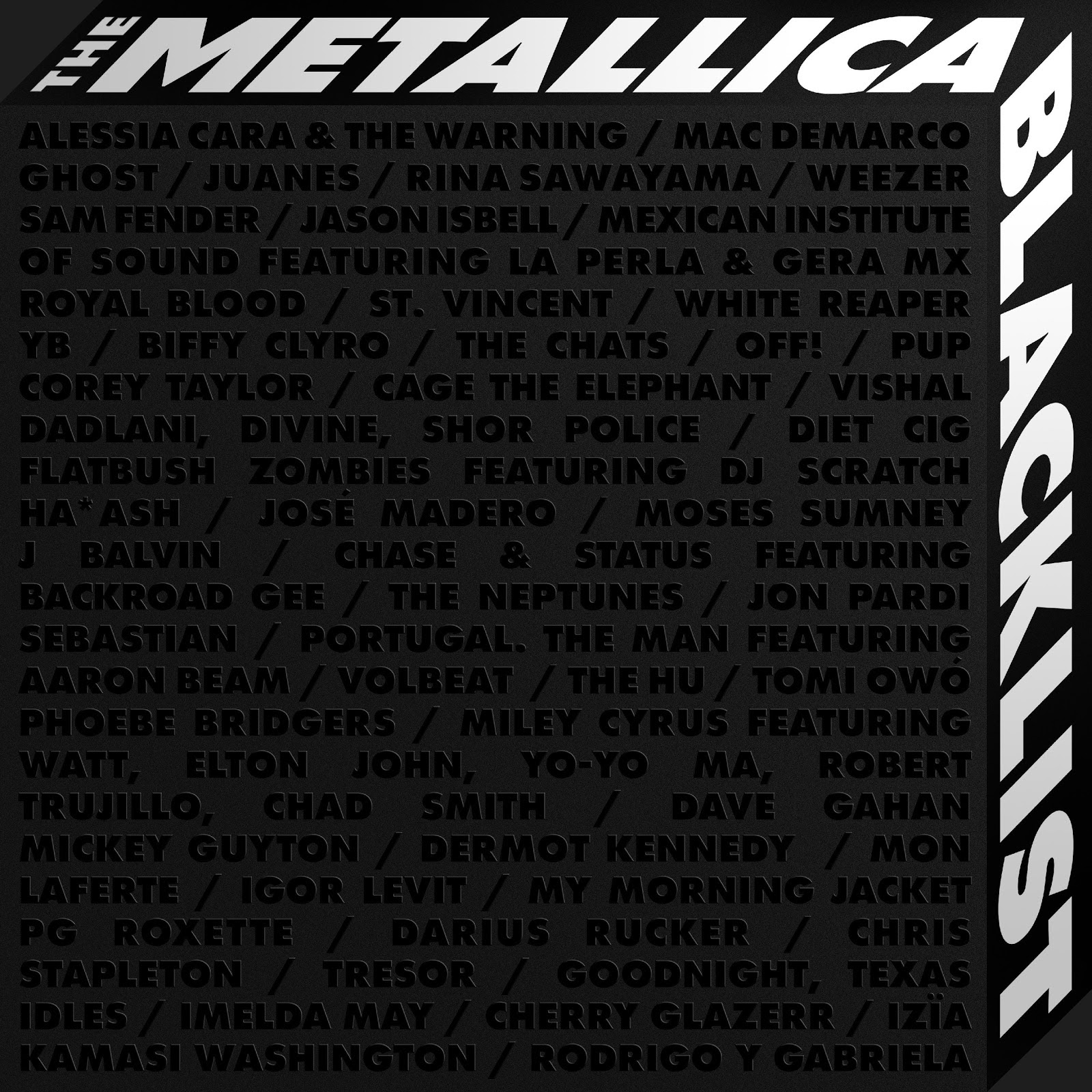 Wow. When the world’s biggest metal band celebrates the release of their best-selling album, you expect it to be huge. But nothing could have prepared Metallica fans for The Metallica Blacklist. Fifty-six artists, six hours of music, a complete reimagining of one of the most iconic records of all time. It’s the kind of thing only a band like Metallica can do. From the highest of highs to the lowest of lows, The Blacklist unites fans not just of heavy metal, but every kind of music. And they are all bowing to the power of an album written 30 years ago. If this isn’t legendary, then the word has lost all meaning.

Metallica haven’t been tied down to the metal scene for decades now. They exist on a higher plane of popularity, and the release of Metallica (aka The Black Album) is what put them over the edge. It has sold 30 million copies to date, spreading their influence where no metal act had been before. That’s on full display in The Blacklist. This is where hip-hop artists jam alongside jazz fusion bands, indie-folk follows Mongolian throat-singing and what’s hardcore punk one second can become dance pop the next. It’s very overwhelming at first. But by the time J Balvin is rapping “Wherever I May Roam” in Spanish, all bets are off. Metallica are clearly aiming for an audience fit for their world-dominating popularity on this one.

For fans who don’t have the time to sit through all six hours of The Blacklist, some tracks are worth checking out more than others. IDLES insert British gutter punk energy into their cover of “The God That Failed”, already one of the heaviest songs on The Black Album. Royal Blood continue to sound bigger than their two members on a worshipful “Sad But True”, while Corey Taylor sounds like Corey Taylor on “Holier Than Thou”. Ghost have definitely been waiting to cover “Enter Sandman” forever and it comes out with their distinct organ-heavy energy. Volbeat must be sick of all the comparisons by now, because their “Don’t Tread On Me” features one of The Blacklist’s most faithful renditions. But it’s The Hu's Mongolian-language “Through The Never” that will send fans into fits of musical ecstasy. Don’t miss more covers by Pup, Weezer, Off! and White Reaper.

That’s just the rock and metal. The Blacklist gets much more interesting when it branches outside the guitar-sphere. First is Juanes, the Colombian pop musician who returns to his roots for a reggaeton “Enter Sandman”. Rina Sawayama turns the same song into a thrash/dance tune. Soon, it’s the country artists turn. Chris Stapleton, Jason Isbell and The 400 Unit and Jon Pardi all throw their oversized cowboy hats in the ring. Phoebe Bridgers is here to chill things out with her piano and indie-rock production, as is rising R&B star Tomi Owó, whose version of “Through The Never” manages to balance metal riffs with her angelic voice.

But they can’t all be hits. Some of The Blacklist misses the mark. St. Vincent is a confirmed metalhead, but her synth-pop “Sad But True” won’t please metal fans or her own listeners. Bollywood legend Vishal Dadlani valiantly takes on “The Unforgiven”, but it’s too sappy to be worth more than one listen. Diet Cig sounds like Phoebe Bridgers if she listened to more Wolf Alice, but somehow not as cool as that should be. But the bottom has to be My Morning Jacket, who turn “Nothing Else Matters” into a pop rock tune that sounds weak and lacking in bite at the same time. It’s the soundtrack to a bad commercial interrupting your YouTube playlist.

All the attention is right on the centre of the album. It's where Miley Cyrus, Elton John, Yo-yo Ma and Chad Smith of Red Hot Chili Peppers deliver the star take. Miley Cyrus has reinvented herself several times at this point, but her recent transformation into The Hard Rock Queen of Karaoke has been unexpected and genuinely great. She has a harsh edge on her voice that has been hiding up to this point, a bluesy rasp that calls to mind PJ Harvey, Courtney Barnett and James Hetfield’s own bark. As their version of “Nothing Else Matters” swells to its climax, it’s clear that this is the only track on The Blacklist that can actually be compared to the original.

The secret to Metallica’s success is their ambition. They never turn down an opportunity, all ideas of ‘selling out’ be damned. Some metal fans could consider this the ultimate sellout, a complete mainstream crossover. But those fans haven’t really been on the Metallica bandwagon since 1991, when The Black Album was first released. For everyone else (as in, the majority of people), Metallica are the most recognizable name in heavy music. The Blacklist confirms it like nothing else ever could. While most of the Bay Area thrash scene are rapidly approaching their final bows, Metallica just keep on getting bigger. Rock on, guys. You deserve it.