Album Review: LIV SIN <em>KaliYuga</em>
One of the higher quality acts to take shape during the pagan folk metal explosion of the 00's, Heidevolk emerged from the Netherlands with a sound that combined very metallic riffs with the catchy, tuneful folk melodies inherent to the genre. A tier or so below the leading lights of the movement in popularity, Heidevolk's tales of ancient Gelderland were sung entirely in Dutch and over the years, the band has come to be regarded with a high degree of respect.

One of the higher quality acts to take shape during the pagan folk metal explosion of the 00's, Heidevolk emerged from the Netherlands with a sound that combined very metallic riffs with the catchy, tuneful folk melodies inherent to the genre. A tier or so below the leading lights of the movement in popularity, Heidevolk's tales of ancient Gelderland were sung entirely in Dutch and over the years, the band has come to be regarded with a high degree of respect. For them the style they play is no trend. After four superior albums, the most complete of which was arguably 2008's Walhalla Wacht, Heidevolk returns in 2015 with Velua. No matter what's 'in' or cosmopolitan in metal, these stalwarts of the pagan scene can be relied upon to stay true to their roots. That being said, it is still incumbent on a band to deliver. Can Velua keep pace with 2012's steely Batavi, and has their sound developed or is it falling prey to stagnation?

Initial listens to Velua suggest the album possesses a uniformity bordering on a lack of variety within the songs. However, after repeated immersion into the fabled forest of Veluwe, which happens to be the album's thematic setting, it becomes clear that the real glory of Heidevolk's new album lies in its nuances. The title track, with its building riffs and subtle violins, gets under the skin until a very heavy metal breakdown three-quarters of the way through takes the song in a new direction of double-bass laden riffing with accented violin notes. A similar violin section helps enrich the slower paced 'Drankgelag,' which like most of the album benefits from the two-pronged vocal attack. The clean baritone duet of Mark Bockting and newcomer Lars Vogel continues the element that truly sets Heidevolk apart from their peers. Instead of drowning the listener in death vocals, Heidevolk use the contrast of that mighty baritone along with gruffer styling to monstrous effect.

'Winter Woede', for which a most entertaining, cinematic video exists, displays this vocal interplay to grand effect. As an album opener it is quite strong, and leads into the melodic, hard-charging 'Herboren in vlammen,' with its infectious vocal lines and mosh pit inducing pace. The more dramatic 'Urth' shows some maturation on the part of Heidevolk, as its balladry pays homage to Nature and the forest with solemn intonation. The violins buoy the melody perfectly without making the music any less metal. The oddly arranged chorus is catchy as well.

A nice departure from the usual comes in the form of 'Richting de wievenbelter,' with its haunting banshee-like wail in the intro, giving way once more to minstrel-like dual vocal lines and acoustic background guitars. Certainly an album highlight, it contrasts with the heavier leanings of 'In het diepst der nacht,' which is more similarly structured to their Batavi material. It even resembles a bit of what Rotting Christ was doing on their last few LP's. A great melodic guitar lead turns the song into a galloping adventure theme. Along with some solid violin leads, the song feels like a prelude to an ancient battle, set in mystical lands far from the everyday.

Heidevolk wrap their new album up with 'Vinland,' a rousing sing-a-long that their fans outside of the Netherlands will be able to partake in, as it is sung entirely in English. Guaranteed to be a fan favorite, it begs to be sung around a roaring bonfire, flagons in one hand and the hips of curvy Nordic women in the other. (For female fans, hail Vinland with flagons in one hand while swatting away the advances of drunk Nordic men with the other). The rousing nature of this song might be construed as too much of a bend in the direction of the more stereotypical tropes of the folk metal genre. Heidevolk, however, as avoided these kinds of folk anthems in favor of a more modest, storytelling approach in their music. That is exactly why this song works so well; Heidevolk should not be punished for being a pagan metal band. It's okay to have fun once in a while and as the waves crash, the boat creaks, and the voices fade, one can rest assured that Heidevolk marches on, oblivious to trends and what's fashionable. Velua is a strong addition to their discography, and while not quite as catchy as Walhalla Wacht, nor quite as heavy as Batavi, is a fine album that should add a legion or two to their growing fan base.

Advertisement. Scroll to continue reading.
In this article: Heidevolk 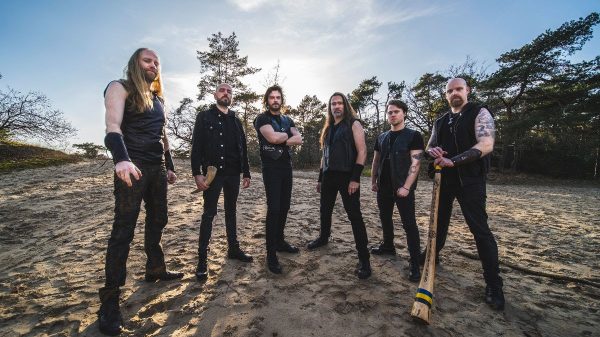 When the New England Metal and Hardcore Fest announced their initial lineup a few weeks ago, it was already unfuckwithable. Anthrax (playing Among The...

Get your tolerance up and your beer mugs ready because is Paganfest is getting ready for another round. Next year's lineup boasts Finland's Ensiferum,...