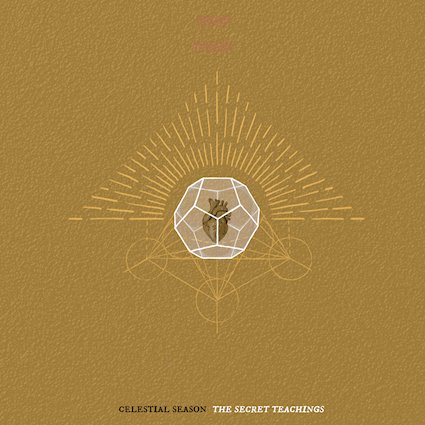 Holland’s Celestial Season is a bit of an obscurity, even on the doom/death scene, which dominated the band’s sound throughout their early works. They’re even more of a curiosity within the realms of stoner metal, a directional tack they took halfway through the first career leg. Forming in 1991 and coming armed with a lineup joined by violins, cellos, and keyboards played by legit orchestra members before it was commonplace, the band hit with 1993’s Forever Scarlet Passions album followed by what was their shining moment, 1995’s Solar Lovers. That latter record used Peaceville Three doom/death as a takeoff board, adding schooled symphonic layers that were as morose as they were complementary. Granted, it was arguably best known for its awesome cover of Ultravox’s “Vienna,” but Solar Lovers was one of those records that had an appeal beyond its subgenre’s denizens and possessed the ability to rally elitists of all stripes around its catchy tunes, varied tempos, lush instrumentation, and miserable air. Trust me; I’ve personally witnessed the hardest of the hard and those holding on to Olympic levels of tunnel-vision ignorance become sucked in by its wily charms.

The following years saw the band take a drastic detour towards Orange amp-ed stoner rock (as evidenced by the title and cover of 1997’s Orange) followed by Chrome two years later and a break up two years after that. They reunited with most of the mid-‘90s “doom lineup” in 2011, but hadn’t done much publicly until now with the release of The Secret Teachings.

With the reconvening of their “doom lineup” one can reasonably expect the Celestial Season to be going forward will be the dour and desolate Celestial Season and that’s exactly what skulks out of the gate with “The Secret Teachings of All Ages” – elegiac piano darkness and groaning strings gently lowering a creaky drawbridge to a world awash with growls and overdriven guitars. However, and unfortunately for those looking forward to a triumphant return rooted in experience and learning from mistakes made, this song is a microcosm for an album that precariously straddles the negative and positive. The track blubs out a production quality mired in transistorized thinness, one which doesn’t unleash the requisite amount of monolithic guitar and authoritatively hammered, cathedral ceiling drums needed to make this sort of metallic canter effective. The guitars of Olly Smit and Pim van Zanen buzz with a gnat-like flight plan focus and are addled by a fuzzy tone more in league with pinball parlour stoner rock than miserable columns of doom. Guess whoever stuck around through the band’s stoner rock years (both Smit and van Zanen did, ironically enough) weren’t content to let go so easily.

As well, a multitude of harmonies and bends on this track and too many others sound out of tune. This presents a calamitous feel, but not in a good way as instruments and layers emerge and retreat like two bands playing at once. The interesting thing is that the melodies highlighted in songs like “The Ourobouros” and “Salt of the Earth” are, in and of themselves, robust and ear-catching, but when everything is piled on top of everything else everything becomes cluttered as the listener pines for sparser moments.

“For Twisted Loveless” is less frazzled and reveals how the band employs extreme dynamics as transitions. Sometimes they work in a seamless fashion, other times they appear more like a songwriting crutch, bouncing from all fourteen hands being on deck to barren emptiness at the drop of a hat. And more out of tune sounds have the heavy palm-muted chugging crawl offset by melodies that’ll sandpaper on the nerves of anyone with perfect pitch. “Long Forlorn Tears” has excellent sullenness and violin playing over My Dying Bride guitar schlepping that's white-washed by a terrible mix that neutralizes much of the downcast weight with inconsistent instrument levels. And, as entertaining as it is, I’m still trying to figure out the inclusion of the cowbell part and its place in slit-your-wrist doom metal, not to mention what appears to be a kalimba carrying the melody in “Amor Fati.”

“They Saw it Come From the Sky” is the album’s most obvious flirtation with their stoner metal years with its slinky and shifty guitar duels, but what didn’t come from the sky was a frickin’ guitar tuner. When the guitars aren’t aching for consonance, “Lunar Child” works toward redemption until the three-minute mark when a clean melody gets thrown under what’s supposed to be a crushing guitar and the mix suddenly devolves into something akin to a first-timer noodling around on a Fostex four-track.

On the topic of redemption, the two most together moments of the album are the final pair of tracks. “A Veil of Silence” is a bluesy jammola that takes Houses of the Holy and introduces it to Turn Loose the Swans, complete with a prolonged guitar solo that could have come from the school of ‘70s stadium rock extravaganza and “Red Water” congeals thick bass, heavy guitars and a mournful mix of male and female voices in a slow burner that recalls Type O Negative. An encouraging end to what is entirely too frustrating and disappointing a listen.