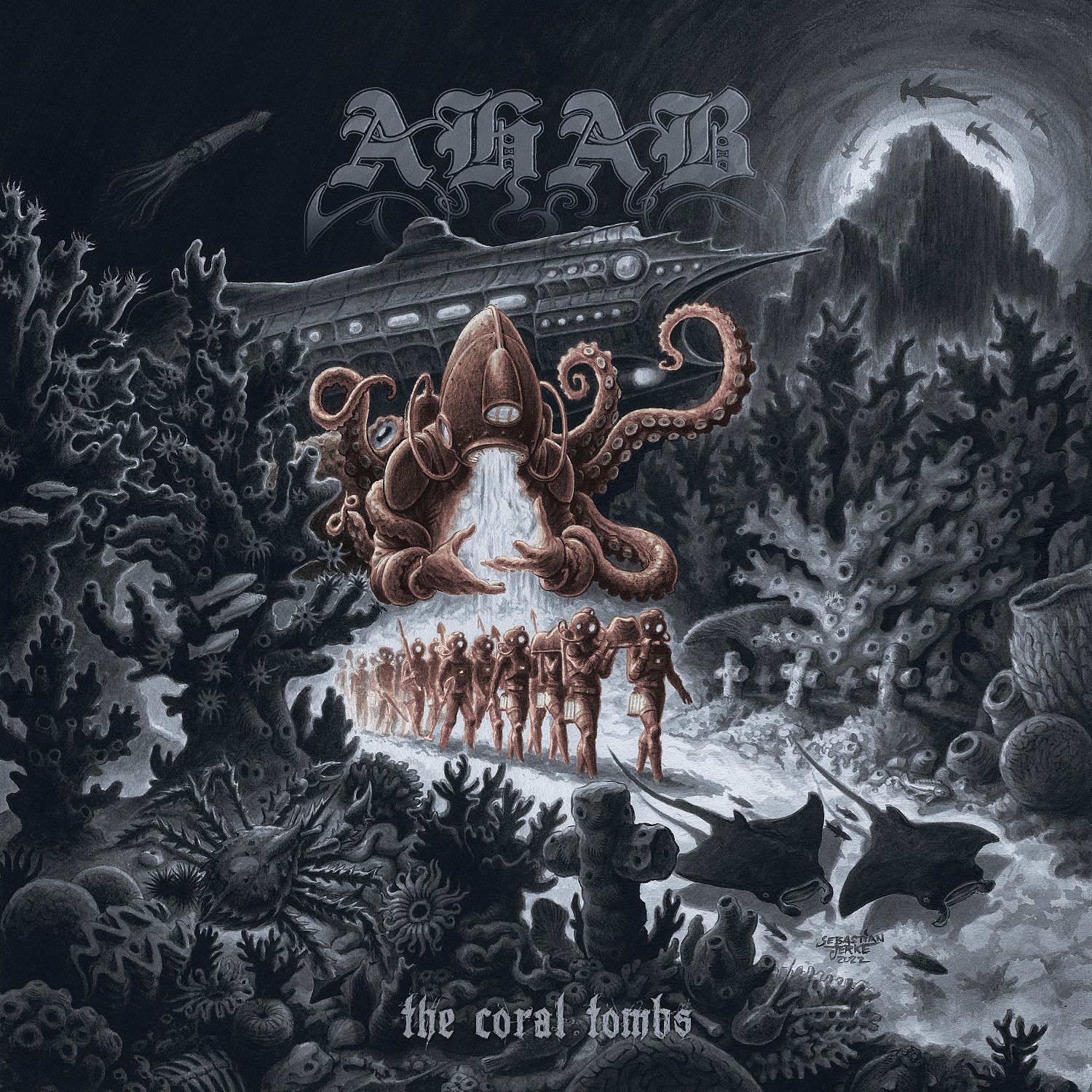 It's been nearly eight whole years since progressive/funeral doom metal quartet Ahab released their acclaimed fourth studio LP, The Boats of the Glen Carrig. So there's no better time than now (or prior) to follow-up with another satisfying record based on a beloved story: The Coral Tombs. As the self-proclaimed inventors of "nautik doom," Ahab once again delivers a dynamically constructed seaside tale full of absolute brutality and sullen lamentations. Thus, it's a very worthy extension of their already esteemed legacy.

The Coral Tombs is inspired by Jules Verne's allegorical late 19th century adventure, Twenty Thousand Leagues Under the Seas. As such, it follows characters such as Professor Arronax and Captain Nemo. Plus, the band fittingly revels, it's "arguably the closest Ahab has come to their sound resembling a real soundtrack: it's evil, it's longing, it's sad, it's meditative, it's cavernous, it's vast, it's ridiculously epic and as heavy as the colossal squid itself!" With guest appearances from Chris Dark (Ultha) and Greg Chandler (Esoteric), it's a beast well-worth conquering.

Expectedly, the quartet gets right into the maritime mayhem via opener "Prof. Arronax' Descent Into the Vast Oceans." A torrent of blast beats, piercing screeches, and demonic growls (courtesy of vocalist and guitarist Daniel Droste and Dark) kicks things off, and afterward, the sludgy "Colossus of the Liquid Graves" devotes even more time to enveloping listeners in the group's trademark murky desperation.

Interestingly, most of what comes next emphasizes gentler transitions and atmospheric songwriting, so it's not until the penultimate "Ægri Somnia" that those harsher elements make a prolonged return. And when they do, they're just as hypnotic, fully conveying the slow despair intrinsic to both Ahab and Twenty Thousand Leagues Under the Seas. As for closer "The Mælstrom" (which features Chandler), it's sort of the mirror reflection of "Prof. Arronax' Descent Into the Vast Oceans" in that concludes—rather than begins—with its most diabolical moments.

As alluded to earlier, The Coral Tombs offers perhaps the band's strongest balance yet between fierceness and fragility. Not only is the majority of "Prof. Arronax' Descent Into the Vast Oceans" comprised of soft guitar and bass lines—in conjunction with pensive percussion and clean bellows—but a few tracks in the middle are fairly delicate and glum.

For instance, "Mobilis in Mobili" begins with high-pitched bells over rumbling water and nearly ends with droning ambiance not unlike something from Opeth's Morningrise or Orchid. Likewise, centerpiece "The Sea as a Desert" starts out with shakers, contemplative guitar arpeggios, goth rock misery before wrapping up with soft singing and calm guitar strums.

That's not to say that these pieces don't incorporate hellish segments, too, but rather that the group steadily juxtaposes their lighter and darker sides with entrancing poise. Granted, there could be even more diversity overall to help each song stand out more, but on the other hand, it's that consistent aesthetic that allows the record to flow with powerful continuity and unrelenting moodiness.

Like a great film, TV show, or novel (such as Twenty Thousand Leagues Under the Seas), The Coral Tombs immediately and perpetually establishes a distinctive vibe and personality. It could be more individualistic from track to track, yet that would also disrupt Ahab's perceived goal of crafting an album that moves along like a single calamitous journey. In other words, what The Coral Tombs lacks in variety it gains in sustained weightiness and vision, making it a rewarding journey for fans of the band and/or the book on which the LP is based.