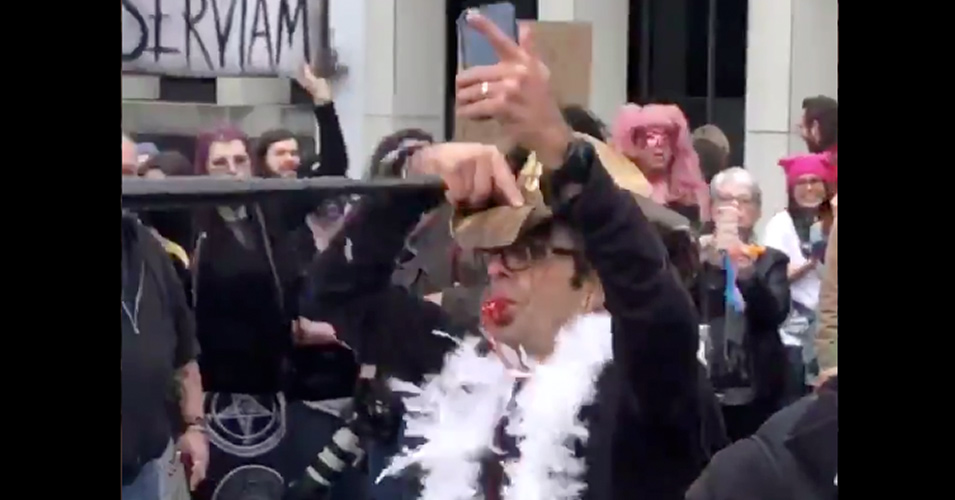 As promised, Lamb of God frontman Randy Blythe showed up bright and early this morning to stage a counter-protest, nay, counter-party to the fun-hating Westboro Baptist Church. The church came to protest the election of Danica Roem to state legislature. She is Virginia's (and the nation's) first out trans person to be elected and serve in a state legislature.

"Why bother throwing a kazoo counterparty when the loonies of the Westboro Baptist Church show up? Well, first and foremost, Danica is my friend. I don't like people who mess with my friends. Second, their 'message' sucks — they do have the right to preach it, but we also have the right to drown it out with kazoos. Third, it's too good of an opportunity to pass up. Who doesn't want to hear a few hundred people playing the 'Sanford & Son' theme on kazoos? Only a truly godless and un-American puppy-kicking troglodyte, that's who.

"Why let a perfectly good chance for some harmless and hilarious mischief pass by? Some people say: 'Just ignore them, you're only giving them more publicity to raise money with.' I disagree. From the Southern Poverty Law Center website: 'Fred Phelps and his small congregation provide WBC's funding; the group neither solicits nor accepts outside donations.' Phelps is dead and gone, but many members of this 'church' are lawyers, and they fund their activities from lawsuits — someone loses their cool and punches one of them, and then they sue the pants off of the aggressor. Or a city won't let them protest, and then they sue the city. This has substantially increased their coffers several times.

"So let them come with their signs and nonsense. As long as everyone remains cool, ignores these mental cripples, and plays ripping kazoo tunes, then all the Westboro Baptist will have accomplished is burning some of the funds in their travel bank account."

Based on pictures, counter-protesters outnumbered the actual Church by at least four to one odds.

In the first picture you’ll see the Westboro Baptist Church protestors, the second is all the counter protestors. @NBC12 pic.twitter.com/sw1BnE84lo

One person at the event reported that Randy's crew were such a nuisance that the ended their protest early. Hell yeah!

Here is some video from the event:

Watch the FULL VIDEO here on my IGTV. Tomorrow, 9 AM, 1000 Bank St, Richmond VA. $200 cash prize for best costume! We will have at least 200 kazoos to give out & various other melodious party-enhancing devices. Get there by 8:45 AM at the latest! My friend @dargott (director of the “As the Palaces Burn” documentary) is sending out a small film crew to document this EPICNESS. Remember, not matter what kind of offensive things they say- DO NOT ARGUE OR ENGAGE IN ANY WAY with the buffoons of the #westborobaptistchurch- that’s what they want. We’ll just drown them out instead. What if they don’t show? I don’t cancel parties because unwanted jerks don’t show up- there will still be a #kazoo #champagnejam & CASH MONEY for best costume. See y’all there! #kazoo #counterparty #westborobaptistchurch #beatitkooks

I somehow ended up up Randy Blythe’s protest against the Westboro Baptist Church ? pic.twitter.com/CNbhwBAs2P

This is the counter protest to the six people here from Westboro Baptist Church, a group @splcenter calls “arguably the most obnoxious and rabid hate group in America.” pic.twitter.com/Q8Qv2FTSuc

@hEnereyG hopefully this is a good start to your day. Randy Blythe from lamb of god organized a counter party to the Westboro Baptist Church today in Va. this is the result. pic.twitter.com/kN5MAcdkHG

The noise level is nothing compared to real life. Westboro Baptist Church’s boombox can’t be heard over this kazoo party. @theCT pic.twitter.com/42kjsCdvBF

Big shoutout to Randy Blythe of @lambofgod and all the supporters today who held a counter protest so big and loud the Westboro Baptist Church called it quits 10 minutes early. pic.twitter.com/tOIYeZBvii

A “friendly” goodbye to the Westboro Baptist Church. pic.twitter.com/PHOg8Wzeax