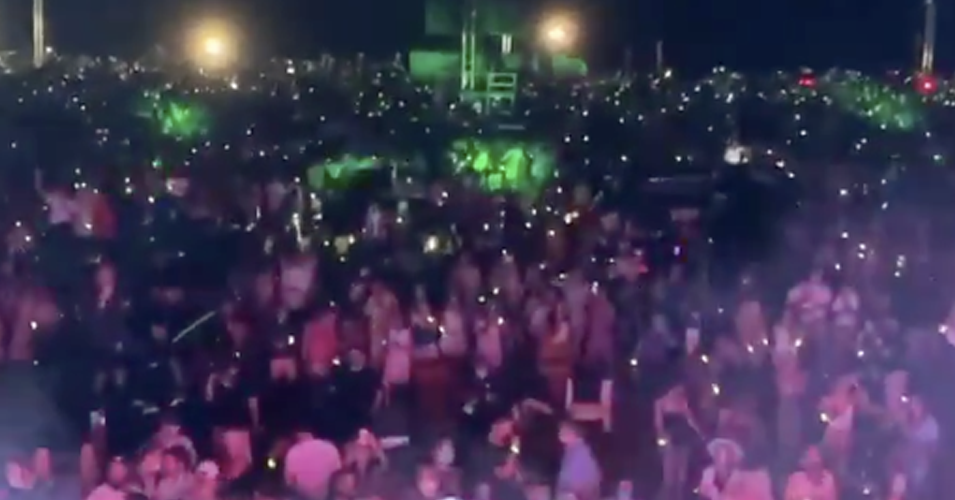 What was initially supposed to be a drive-in charity event, turned into a rich person rave. Bloomberg reports The Chainsmokers headlined a $25,000 a car drive-in event in the Hamptons this weekend, that saw all the rich concert goers get out of their cars and just start partying together.

Risking your life for a Chainsmokers concert? Maybe a Rage Against the Machine reunion, but Chainsmokers?!

The story gets more absurd. According to Bloomberg, Goldman Sachs Chief Executive David Solomon was among the performers that night, spinning under the DJ name "D-Sol." Bloomberg describes the performance as "He put his hand up in the air, playing electronic dance beat takes on popular songs — not unlike the Chainsmokers, with more Fleetwood Mac than Coldplay. Giant plumes of smoke went up in front of the stage as the sky turned pink and orange."

Naturally, since this is a rich person event, there were absurd perks. Portable toilets were cleaned every 10 minutes (brutal!) And:

Valets dressed in white polos and khakis found ways to be helpful, like stopping the Surf Lodge vehicle from backing into some beach chairs as its driver tried to maneuver into a spot (the white lines delineating them had been sprayed on Friday). Others in golf carts dropped off bags of ice so guests could keep their drinks cold. (A crew of two ran from vehicle to cooler, row by row, under a blazing sun with cans of Red Bull and BrightFox.)

The event was billed as a charity event with "any profits from the Hamptons event will be donated to No Kid Hungry, Southampton Fresh Air Home and Children’s Medical Fund of New York."

Only a brief bit of footage has surfaced, showing very little in the way of social distancing:

The Chainsmokers had a “Drive-in” concert in the Hamptons last night…looks like social distancing was strongly enforced ??‍♂️….when NY gets the inevitable spike just blame these rich selfish white people

Another clip shows people eventually abandoning their cars and just moving up:

Another clip shows an Instagram user creeping further and further towards the stage:

The entitlement is wild.. pic.twitter.com/YJZbguMP9N

Cases in New York have held steady at around 500-700 a day, a far cry from the thousands of new cases a day from a few months ago, but one event like this can end up setting everything back.

Would you attend a gig like this? Other bands to hold recent gigs include Static-X, Dokken and Great White.

In this article: chainsmokers, coronavirus, Covid-19