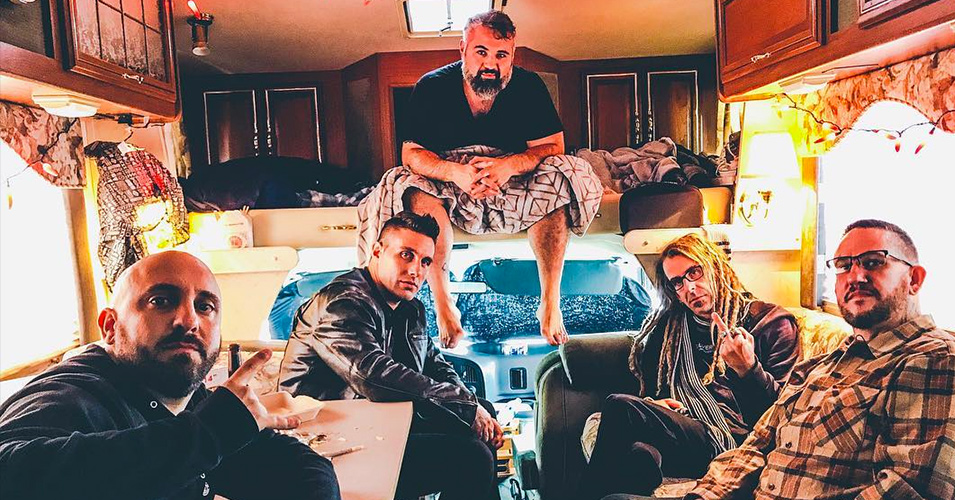 This morning on Instagram, Lamb of God frontman Randy Blythe announced he's in a new band called Over It All. "What have I gotten myself into?" Blythe asks.

The new project also features Animals as Leaders guitarist Javier Reyes, Sworn Enemy guitarist Lorenzo Antonucci, Mediaskare Records founder Baron Bodnar, and 33 & West booking agent JJ Cassiere. The photo features the five of them in an RV. Based on the caption, it seems like yesterday, January 10th, 2019, was the first day of the band's existence.

The Instagram caption reads: “The Nightmare Begins” 1.10.2019 In the @overitallofficial RV with my bros- we’re just ONE FREAKING DAY into this thing & already it’s trashed & smells like ass. I guess that what happens when you put a bunch of freaking savages from @lambofgod, @animalsasleaders, @swornenemynyc, & #atticsforautomatics together to form a band. Christ almighty, I thought I had left the van/RV days far behind me… Thanks @sumerianrecords for paying for the RV… I guess. Give us a follow for updates: @overitallofficial. What have I gotten myself into… #overitall #lambofgod #animalsasleaders #swornenemy #atticsforautomatics #sumerianrecords #getyourshittogetherkevin

On the band's social media account, they imply that Animals As Leaders' Javier Reyes is relegated to bass duties, joking that Reyes needs to "settle the fuck down and stop trying to do all that crazy Animals As Leaders guitar shit on the bass with Over It All"

With the clues that this is the band's first official day, and that they're all forced into an RV, I have a sneaking suspicion this might all be for some sort of video series, but that's completely conjecture on my part. We'll keep you posted if any new music surfaces.