No Really, CHRIS BARNES Truly Hates The Modern Death Metal Scene
They've since apologized to each other.

Metal Blade CEO Brian Slagel recently released his new book For The Sake Of Heaviness: The History Of Metal Blade Records, which details the label's storied history in the world of metal. In one passage of the book, Slagel recounts being beaten out to signing Megadeth by Combat, who offered the band $1,000 more than Metal Blade did. Slagel says he remembers frontman Dave Mustaine "writing me a really long, heartfelt letter saying how he really wanted to be on Metal Blade, but it just wasn't meant to be."

"The only band that I didn't get that I wished I had was Megadeth. It was between us and a brand new label called Combat, which was part of the Important distribution firm that we'd started working out with. Late in 1984 they'd decided that the whole metal thing was starting to happen and they wanted to get on it by creating their own label. The first band that came onto their radar (and ours at the same time) was Megadeth. In the end, it came down to just a thousand dollars. We had offered them seven thousand dollars, but Combat offered eight, so they went with Combat.

"With hindsight, especially given what Megadeth became, I've often thought, 'Well, maybe I could have gotten a little more money together.' But really, at that time, seven thousand dollars was absolutely the most we had ever offered anybody. Most of the stuff we were doing involved spending $1,600 to maybe $3,500, at the high end, to make a full record. Seven grand was a lot of money. I remember Dave Mustaine writing me a really long, heartfelt letter saying how he really wanted to be on Metal Blade, but it just wasn't meant to be."

Now Mustaine has taken to Twitter disputing to Slagel's claim. Mustaine says he'd never have signed with Metal Blade, and if the rest of the book is anything like that passage, should be labeled fiction.

Slagel has since apologized to Mustaine, who graciously accepted and asked if there were to be a reprint, that the passage is taken out.

You can see the whole conversation below via Twitter.

If the fallacy of offering us a deal for $7,000 is any indication of the rest of this book, I hope it’s marked fiction. I’d never sign w/you https://t.co/fNZq0waPL0

I’m so sorry if I got this wrong or offended you. I do remember talking to your camp at the time. If my memory is wrong again not intended https://t.co/QhkXjcczHE

I totally forgive you, but you didn’t talk to us. Please take that out of your book at your next printing and good luck with your project ? https://t.co/9N25ACQLmd

Thanks. He’s an old acquaintance and a nice guy, and I don’t believe he meant any harm. I just wish it didn’t happened in the first place. https://t.co/muzJPJHqXc 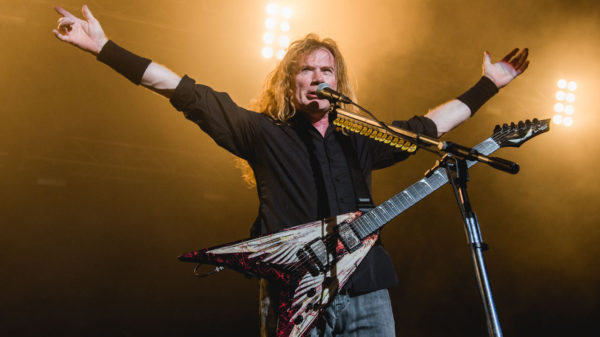