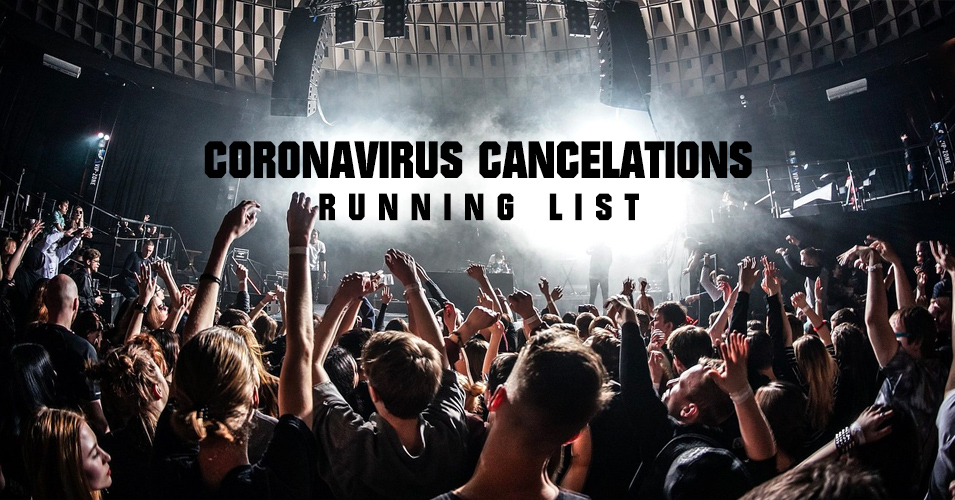 Government agencies and businesses have begun taking active measures to prevent the further spread of the disease, and avoid the possibility of overwhelmed medical facilities. The NBA, NHL, and MLB have postponed their seasons until further notice. Multiple cities have declared a state of emergency, and limited public gatherings to under 1,000 (sometimes as low as 250). Because of the quickness of how the news is spreading, we decided to build this page as a running list of all the events as they are being cancelled in real time.

3/18/20 – Tool postponed their spring dates. Their headlining gig at Bonnarro moved to the fall.

3/17/20 – Allegaeon's North American tour with with Fallujah, Entheos, and Etherius has been postponed.

3/17/20 – Origin and Defeated Sanity have postponed the remainder of their tour.

3/16/20 – Cattle Decapitation's European Pandemic tour has been postponed due to the actual pandemic.

3/16/20 – The Acacia Strain tried to book some makeup shows this week, in lieu of tour cancelations, but all of those shows have been canceled as well. They were able to play Vegas on 3/15

3/16/20 – Misery Signals and Darkest Hour have postponed their April tour.

3/14/20 – Whitechapel has canceled its European/UK tour with Dyscarnate.

3/13/20 2:30pm – Killswitch Engage have now had to postpone the remainder of their tour with August Burns Red, Light the Torch due to public gathering restrictions.

3/13/20 2:20pm – Sepultura has postponed their Quadra tour with Sacred Reich, Crowbar to the fall. They hope to announce dates soon.

3/13/20 2:20pm – We Came As Romans, The Devil Wears Prada, Gideon and Dayseeker announced they are postponing their tour.

3/13/20 1:30pm – Lamb of God, Kreator, Power Trip have postponed their tour due to travel restrictions. They hope to announce rescheduled dates soon.

3/13/20 1:30pm – Deafheaven have postponed their tour with Inter Arma, Greet Death and All Your Sisters "until further notice." They are working to reschedule the dates.

3/13/20 1:30pm – Evanescence has postponed their European tour and are looking to reschedule this fall. Tickets will be honored for the rescheduled dates.

3/13/20 1:30pm – The Acacia Strain are forced to cancel their UK/European dates, but North American dates are still on for now.

3/13/20 1:30pm – Decapitated are canceling all dates after Sunday, March 15 in Birmingham with Beyond Creation, Ingested, Lorna Shore and Viscera.

3/13/20 1:30pm – Insomnium are forced to cancel their current North American tour with Omnium Gatherum due to travel restrictions.

3/13/20 1:30pm – We haven't reported this previously, but Download Festival Australia is canceled.

3/13/20 11am – Devastation on the Nation featuring Rotting Christ, Borknagar, Wolfheart, Abigail Williams, and Imperial Triumphant, has been postponed to 2021. The same exact bands and the same exact dates will happen, just one year later.

3/13/20 9am – Rage Against the Machine has postponed the first leg of their tour between March 26 and May 20, with their first show at Boston Calling on May 23.

3/12/20 7pm – Killswitch Engage, August Burns Red, Light the Torch March 28th Seattle show canceled, but the rest of the tour is trucking along.

3/12/20 7pm – Tool announce Salt Lake City show on 3/16 is postponed.. Idaho has also been canceled. and Tool will take a "day to day" approach for the remainder of their tour dates.

3/12/20 7pm – Decibel Metal and Beer Fest in Philly is postponed due to a lockdown in the city, imposing a limit on large gatherings over 1,000 people.

3/12/20 6pm – 3Teeth, Carnifex, The Browning and Skold announced their tour is canceled.

3/12/20 5pm – Tool postpone tonight's Eugene, OR show. As of this writing, the band notes " The remainder of the previously announced North American tour dates are currently unaffected."

3/12/20 5pm – Dance Gavin Dance postpone their entire tour with Animals As Leaders, Veil of Maya, Issues and Royal Coda. They hope to announce rescheduled dates soon and would honor all tickets.

3/12/20 5pm – Circa Survive has canceled the first leg of their Blue Sky Noise 10th anniversary tour with Polyphia and Gouge Away. Canceled dates run from March 20 through April 14

3/12/20 4pm – Norway's Inferno Festival is canceled after the country banned all public gatherings through April.

3/12/20 3pm – A report from Billboard notes Live Nation is planning on pausing all touring starting tomorrow. Live Nation is the major concert promoter in the world, so many big tours will be affected.

3/11/20 5am – Russian Circles and Torche have postponed their European tour.

3/10/20 8pm – Coachella announce the festival has been pushed back to October, and all the bands are still currently committed.

3/10/20 8am – Pearl Jam announce they are postponing their North American tour.

3/2/20 – Lacuna Coil cancel all their touring due to coronavirus concerns.

2/28/20 – A fan attending a Tool show in New Zealand was revealed to be diagnosed with coronavirus a few days later.

2/24/20 – An Italian show of the Testament, Exodus, Death Angel show was canceled due to the city being on lockdown.

We will keep updating this page with more news as it happens.