MANTAS To CRONOS On Recent VENOM Reunion Comments: "Watch The Videos Of Your Own Band If You Wanna See A Sub-Par Performance"
Corpsegrinder takes issue with Suicide Silence fans who say Mitch Lucker would be rolling over in his grave.

If you haven't heard last week's edition of the RIP a Livecast, we highly recommend the listen. Starting in the second hour, we were joined by Cannibal Corpse frontman George "Corpsegrinder" Fisher, and the man had so much to say that we ended up going an hour longer than we usually do.

One interesting topic that George brought up was all the recent heat Suicide Silence were getting with the release of their self-titled album, which featured clean singing. Fans very much rejected it, as the band saw their lowest sales figures since their debut. It seems the backlash offended Fisher, who was prompted to speak out on the situation and call out fans for inappropriately evoking the name of late vocalist Mitch Lucker, who died in a motorcycle accident. Here's a transcript of just some of the Suicide Silence talk:

"[Suicide Silence] have been given a lot of grief from fans who say 'Mitch would be rolling in his grave.' To that I say, fuck off!" Fisher stated. "You didn't fucking know him. I knew him. We did a South American tour with those guys and I sang on one of their records, okay? Mitch is the one who asked me to do that, okay? I mean seriously, he asked me to do that. We knew [bassist] Dan Kenny for years, before he was in Suicide Silence. Mitch and Dan Kenny were there and we were drinking in this bar in South America and I remember Mitch said 'I know we're kind of different death metal than you guys, and some people would say it's not real death metal like you guys, and I would be honored if you sang on our record.' And I was like 'Dude, fuck all those people that don't believe you're real death metal. It's just different. You do a different style. I would definitely do it.' And of course, he passed away, but I did do it."

Fisher continued "I did it, because they're my friends, and whether Mitch passed away or not. And then, what happened happened. Then I see people who are just fans, no offense – obviously, fans are the lifeblood of this music, they're the reason we're here. They're the reason every band is hear. But it doesn't give you the right to talk like you know Mitch, like 'oh, Mitch is rolling in his grave, with you guys doing clean vocals.' How the fuck do you know? Did you know him? Did you know. That irks me, man. I just don't get it. I'm holding back but I was pissed off.

"If it was somebody who was his actual friend… then fair enough, we can have this conversation. Otherwise, give me a break. Don't just give me this 'he's rolling in his grave.' That's an insult to his bandmates, who lost their friend. You can't speak for him."

Fisher concluded "I'm taking up for my boys. Suicide Silence are my boys. If you don't think they're death metal, fuck you!"

Are you going to argue with a guy named Corpsegrinder? I don't think so. Fisher had a lot more to say about this on the show, and we played a hilarious rendition of our game show, Death or No Death, where you have to decide which band names are real and fake, and George did amazing at the game. Take a listen here or in the player below:

Cannibal Corpse release their new album, Red Before Black on November 3. Watch their killer music video from the album here and go see them on tour. 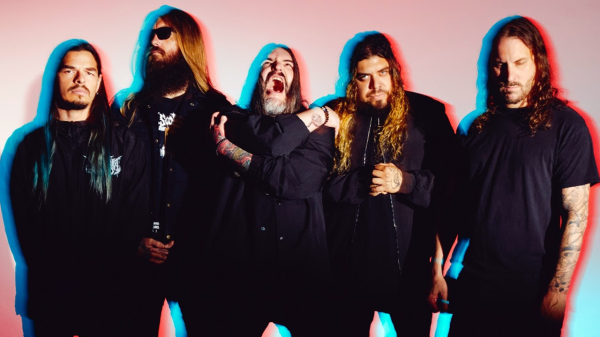