EVERY TIME I DIE Vocalist KEITH BUCKLEY Issues Statement: "We Should Have Broken Up In 2014" 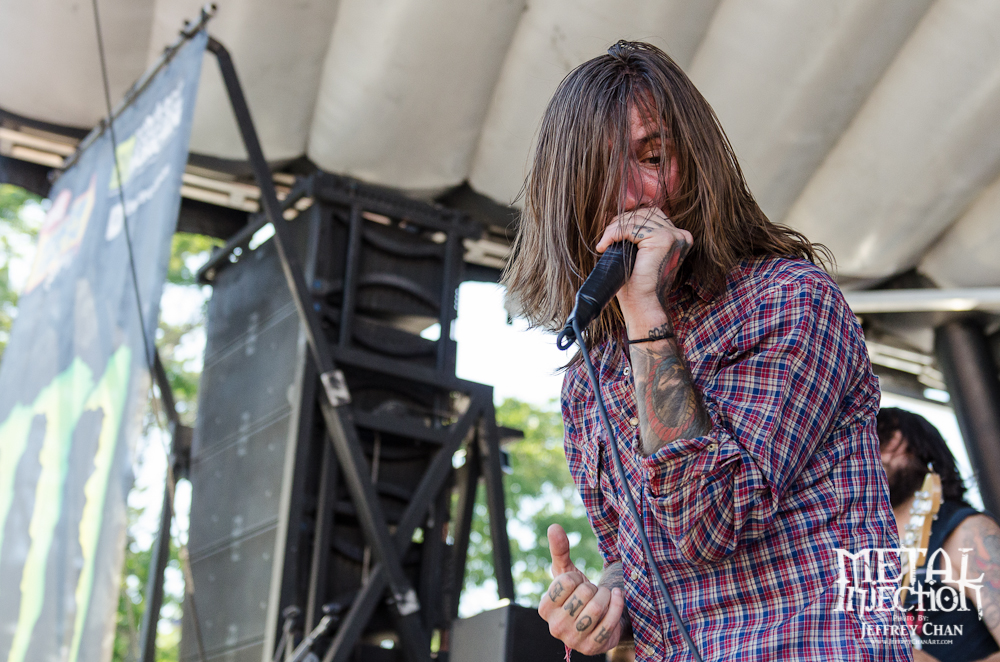 Every Time I Die announced their breakup on January 17 after having a public falling out with vocalist Keith Buckley throughout December. Buckley originally announced that he would be taking a mental health break from the band and then clarified that since his sobriety, he felt ostracized from some members of the band. Every Time I Die then released a new statement the day after saying they are resolving things "privately" with Keith, and that they would all perform their 'Tid The Season show on December 11.

Now Keith has issued a lengthy statement telling the story of how sees things. Keith said in his statement that he had no idea (and did not condone) that the band would carry on their tour in December "karaoke-style" after he exited for mental health reasons, that he was ultimately given the band name and asked by the other members to carry on without them, that the band should have broken up in 2014, and that the lyrics on Radical became a point of contention between he and his brother (and guitarist) Jordan Buckley.

Read the full statement below.

"There is absolutely no hate in my heart when I say that whatever is going on with the guys from now on is between them and their God. Any emotional/ mental connection I had to them was thoroughly severed when I got that letter on Dec. 20th. That was where our paths finally diverged completely.

"I need it to be crystal clear that after their Twitter statement (then deletion then retraction) on Dec 3rd, the letter I received on Dec 20th was the only correspondence I received in reply to a request made for a conversation with them on Dec 7th. They did not reach out to me to resolve the issue before Tid The Season. After TTS there were no attempts at contact from anyone in the band (nor our management) until Dec 17th when our manager unexpectedly quit. Still, no group conversation transpired. On Dec. 20th I was sent a legal document stating I was no longer a member of Every Time I Die, but the other 4 members were. That's a factual order of events as | observed them and I need to establish this before going any further. This is MY Truth.

"After I overheard them talking about their plans to replace me while backstage in Asheville on Dec 3rd, I played the show (angrily) and immediately left the tour. you all know that. What you don't know is that as soon as I got home, I made multiple attempts to talk to them about their problems with me, since up to the day before the Asheville show | genuinely thought things were better than they had been in a very long time. If you saw me perform then you would know I felt that was true.

"After that Asheville show I tweeted that I was taking a break to protect my mental health because, honestly, I was fucking devastated. The following day they announced- without informing me- that they would continue on the tour and allow the fans to sing 'karaoke style'. Additionally, they quoted me as if I condoned or was even aware beforehand that it was something they were going to do. I found out on Twitter, the same way you did. They then retracted that statement and posted a message of support, claiming I was a 'crucial member'. Despite all this, because of their public announcement of support for me, I thought they wanted to make our resolution a priority. However, after days of being dismissed or outright ignored, my hope then became to try at least make TTS civil.

"On December 20th, 2021, I received a letter telling me that I was separated from 'the members of Every Time I Die' which included all of the members not named Keith Buckley. I was also given a cease and desist, forbidding me from using the name or logo. I immediately lawyered up. I then took the band's name off all promotional flyers for the book tour. I redesigned my social media accounts according to this request. I streamed on Twitch and didn't mention it. Check my work, I played by the rules even though their 'cease and desist' was not legally binding. I was honestly doing them a solid. For anyone concerned about legalities, I am still playing by the rules and am acting in accordance with the council of my lawyer.

"'The Members of Every Time I Die' returned on Jan 5th with an offer to give me back the band and- instead of separating from me – asked me to take the ETID name back and continue without them, with the condition that they receive payments for using the name and all likenesses while I toured. The thing is, being given the band back and/or replacing them was not something I was interested in doing at this point in my life. Also, I do not see ETID as anything other than these specific members. I declined the offer on Jan 6th. If it was done, it was done, but I was still open to figuring out what was best for us all.

"After that I waited for a response, but quickly became uncomfortable with the fact that tickets to upcoming tours were still being sold. It is my understanding that they had, at this point, no acting manager and therefore no one to take responsibility for their decisions. According to my lawyer, no one was responding to his requests to talk either. On Jan. 17th, with pressure from promoters increasing, my lawyer sent them a proposed statement to discuss amongst ourselves. (Here it is for reference… In a desire for transparency I want to let you know that I received a letter from the band's lawyer firing me from Every Time I Die on Dec. 20th. there were no band discussions prior nor since. While the details are being legally worked out, know that I am in a good place and excited for whatever will come next. I wish everyone well and have no hate in my heart.')

"I said that I would release it in 24 hours ONLY if they did not respond with an alternate statement or an interest in collaborating on a new one. As I saw it, something had to be said. I was not going to lie to people to protect 'The Members of Every Time I Die'. No response. Later that night I was texted by a friend telling me to check Twitter. There, I discover that they have announced on behalf of themselves that we officially disbanded after the second Christmas show.

"That is how I found out that the band I started when I was 19 years old was publicly over. In posting that without prior conversation, without legal consultation, without any personal sense of honor for the band we built, these men took away my ability to say goodbye to 20 years worth of sacrifice. That is one of the hardest things to stomach. After half my life in a van I don't even get access to an IG page worth of memories. That, coupled with the incongruous stories that are being told to manipulate and blur the narrative for anyone that might one day look back on this, are to me a wailing and gnashing of teeth.

"My Truth is that the pandemic changed me. full stop. I looked at my life and I realized not only was I unhappy, I was exhausted from pretending I wasn't. So I stripped everything back until I found what I Loved. Then I worked to nurture that Love and set boundaries around it. Any growth that has transpired after that has been, to me, miraculous. After I became sober, I acknowledged to the band the pain I had caused in the past and begged their forgiveness. I promised in return that I would allow the pain they caused me to heal completely and all hatchets would be forever buried. For those understandably unwilling to immediately forgive me, I promised my vigilance at finding the perfect balance of happiness and sacrifice. In return, my mental health was thrown into question when it suited them. Or instead, it was used as a weapon against me when my boundaries offended the consciences of those repeatedly trying to cross them.

"There are a lot of reasons this break up happened, but it could not have resulted in any other conclusion. This was inevitable. In all off it's ugly confusion and negativity and rumor, our own deep familial dysfunction manicured it perfectly. Our problems with each other go back decades. We should have broken up in 2014 to be honest. But we didn't, for our own reasons. I can't speak for anyone else, but I continued beyond that point for no other reason than to connect with other people through my lyrics and live performance. In hindsight, I'm so thankful I stuck it out. FPU, Low Teens and especially Radical are important records that I feel needed to be made. I still sense Radical gaining importance, but the firm spiritual and political stance I took on that record became an insurmountable point of contention between Jordan and I. I, however, make no apologies for a single word.

"If we are friends, if we have met briefly or if we had a whole a conversation, if you have read anything I have written or Truly heard anything I have said and feel seen, then please know how thankful I am for all the love you have provided me and for all the beauty you have shown me along this road. this is the beginning of a new one, I promise. To anyone just kinda concerned from a distance, trust me that I'm good. for real. I have had a month to process all of this. I am happy. You don't have to believe me. It won't change what I know to be True every moment of my blessed life. If you question my character, you can read any of my lyrics and see that I have been very transparent about my life and my struggles.

"And If you don't see me by now then I'm just not for you. It doesn't mean we can't mutually acknowledge that and go our own ways in peace. Unfollow me. Don't support anything with my name on it from now on, it's cool. We'll both be better off for it. Also, please do not send any hate towards anyone regarding this. I sincerely wish them everything they deserve. I have absolutely no plans to comment further.