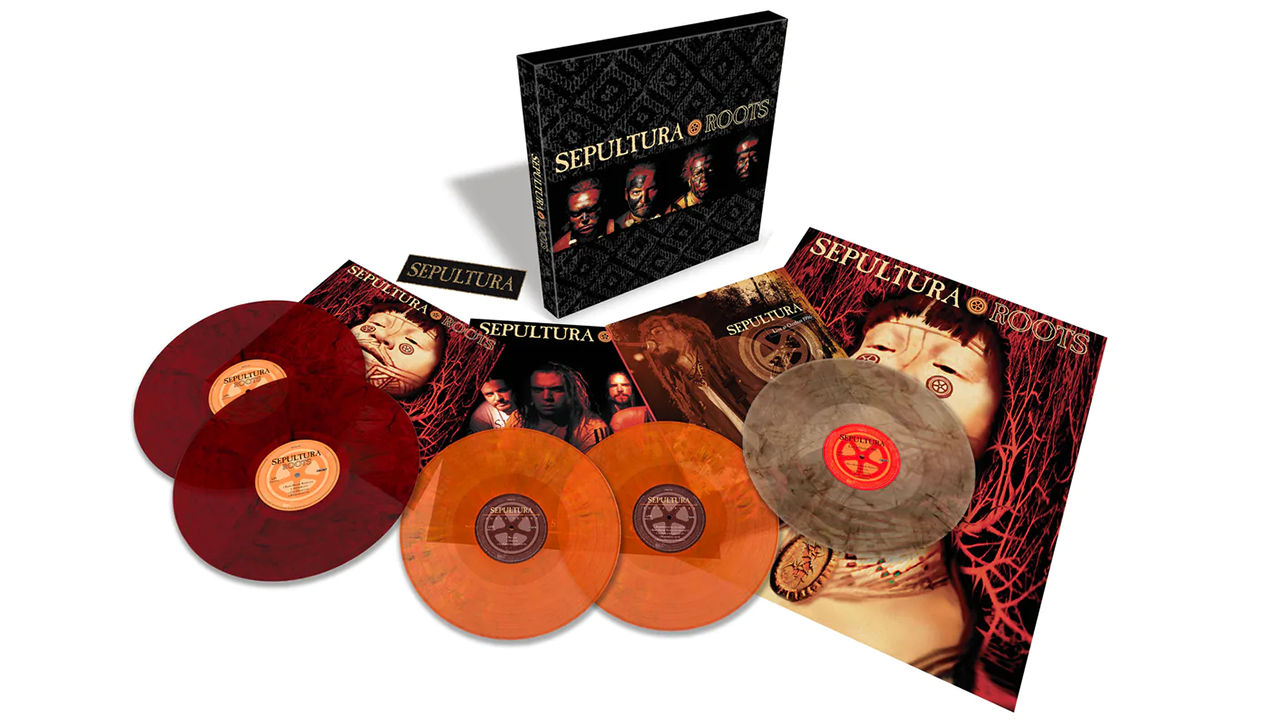 Metal Injection and Gimme Radio have teamed up for an exclusive variant of the brand new Sepultura Roots 25th anniversary vinyl box set. The box includes a previously unreleased live album recorded at Ozzfest 1996, a custom spot-varnished hard box with three gatefold tip-on jackets, and new custom artwork. The box also includes an exclusive embroidered patch and fold out poster. While most of the Roots box sets come in colors you're seeing in the above picture, 10% of all boxes (chosen at random) come on crystal clear vinyl! Get one here.

In a recent interview, then-Sepultura frontman Max Cavalera explained why he doesn't think Roots is a nü-metal record.

"I don't think they gave the record a real chance," he said. "To me, Roots is a very heavy record. I think some of the stuff like 'Straighthate,' 'Spit,' 'Ambush' and 'Endangered Species' was so frickin' heavy and it's fast and it's brutal. I think it's because it got tagged… It got really popular; it got trendy. Some people connected it with 'nü-metal'. I don't think Roots is a 'nü-metal' record. In fact, I think it's very opposite — it's really kind of more caveman. It's simpler — downtuning but simpler riffs. Very heavy percussion."

"On its own, in its essence, to me, it's a special record for sure. I won't say it's my favorite 'cause that's like choosing your kids; it's not right. I don't wanna choose between Sepultura records; I like all. But to me, Roots feels like… It's an idea. It was born at the right time. And it was just a crazy idea that I had in my mind, to record with Brazilian Indians and to bring that to metal.

"And I think that was very ambitious and very courageous. 'Cause not many people do that with their career; not many people gamble everything and make a record with crazy ideas like that. 'Cause so much can go wrong. A lot of bands like to play it safe: 'We just make this record for the fans, and we're good.' And we're just not that kind of band. We like to push the envelope. We like to go forward. And we always never really tried to make the same record. To me, it was an exciting record."

"I was heavily very passionate about the idea of the record — going to the tribe; using all the tribal elements, the percussion. The 'Brazilianity' of the record is incredible. And the record to me sounds amazing. The mix that Andy Wallace did is really, really great. The videos were really cool. The 'Attitude' video with the Gracies; the 'Roots Bloody Roots' video in Salvador; the 'Ratamahatta' [clip] with the dolls.

"Yeah, it was a phase in our life. It ended up being kind of crazy because it was the end of my run with Sepultura. But I'm proud of this record. And it's a big record. Many famous people like this record a lot, like Dave Grohl, and so many people like that. The Slipknot guys, they love Roots.

"I understand some of the old-school metalheads; they just want Arise. They want me to play Arise for my whole life — just keep doing Arise, Arise, Arise all the time. [Arise and Beneath The Remains] are great, but there's different stuff you can do. Chaos A.D. is great. Roots is great. I wouldn't change it for anything. It was the record we wanted to make at that time. And I think now that I'm actually practicing to play it live [for an upcoming tour], I understand Roots more now than before. And I think it's a very complex record; it's a very strange record that's very unorthodox and very cool to listen to. If you listen to the whole record, it has some very different dynamics that's really, really great."