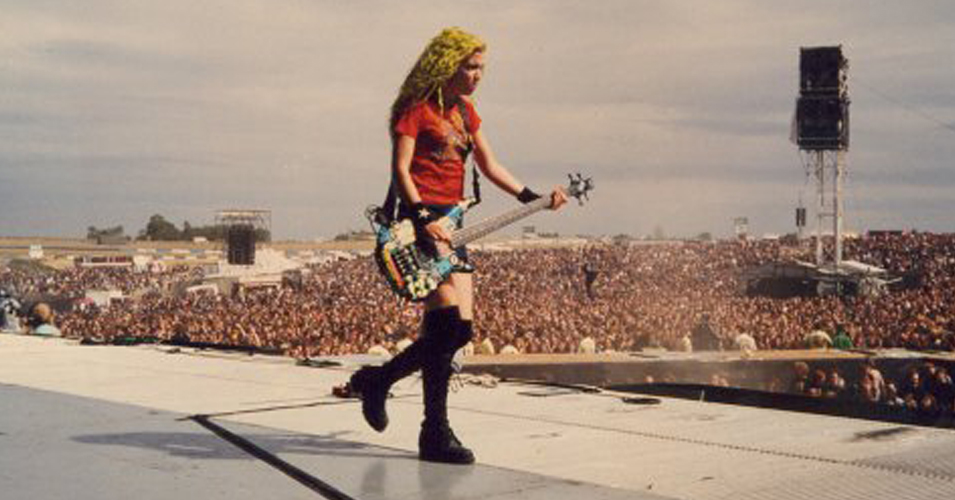 A fundamental member from one of metal's GOATS –  we had the pleasure of catching up with White Zombie's Sean Yseult where she shared with us some killer tales from the past and how they helped shape her top five metal and alternative albums of all time. You can also check out Sean's phenomenal photography, delicious designs and general awesomeness at her official site.

"I have a few easy ways to determine what metal bands I like: does this make me bang my head? Are there unusual and creative riffs and riffs for days that make me happy and/or blow my mind? And last – Is it heavy as hell? Well okay!" said Yseult. "The vocals are crucial also – but my two favorite voices are Lemmy and Ozzy, so that gives a wide range.

"Here are my top metal/alt records in order."

"Black Sabbath is my favorite band and this record is my favorite record. It’s also the record that changed my life. Back as a teenager, I was asked to join a punk/hardcore band in NYC and play the bass. I didn’t play bass, but I bought one back in my hometown Raleigh for $50 and started playing a riff in my head right away. My sister was in the living room with me and said 'Ugh – Black Sabbath' and left the room. I decided I must know more about this band.

"As soon as I got back up to the East Village, I was rummaging around in the record stores (it was what you did back then instead of looking at your cell phone) and while in the East Village punk store, Free Being, I came across Paranoid. Since it was decidedly not punk and therefore not cool, it was in the $1 cut out bin: exactly my budget. I went back to my hovel on Delancey – a five floor walk up with no heat, no kitchen, plenty of roaches and rats – and asked my roommate if I could use his record player. Suffice to say, besides his cool punk records like Bad Brains and Red Kross, Paranoid was from then on in heavy rotation. Eight solid tracks, you really can’t beat it. A life changer for me."

"I can't get enough of Lemmy's voice. I can never get enough of this record. Again – hit after hit – and Motörhead was so much more than a band; they were a way of life. One of the greatest things about Motörhead is that it gave skinheads, weirdo punks (like me and my friends), and metalheads a common ground, so it helped ease up on the beatings if you liked Motörhead.

"There was nobody cooler than Lemmy, and I had the good fortune to see him often when White Zombie moved to LA. Backstage at shows, and almost always at the Rainbow Room playing pinball which is one of my favorite games – I could not have been more of a fan and thrilled, even though I could never understand what he was saying! A side note: when White Zombie toured in the old van days, we would cover 'We Are The Road Crew.' We couldn't afford roadies so we actually were the road crew!

"I like Cowboys From Hell a helluva lot and I like where Pantera went later. But of all the records, I love this one. It is the crazy hybrid of their roots and where they were going, and every song is memorable and badass. Darrell is still writing insane riffs and solos, but he's working in some crazy noise influences from industrial bands like Nine Inch Nails, whose shirt he wore often on tours. Phil is still occasionally singing melodies, which he does so well, but mixing it more with screaming, which of course he also does very well.

"White Zombie toured with Pantera a LOT, and most of that time was during this record release. Every night we would go to the side of the stage to watch, and of course along with all of these great songs they were one of the most entertaining, explosive bands anyone has ever seen live. Against my will, they would drag me out to scream 'Walk!' or even worse  Phil would hand me the mic to go solo with 'Fucking Hostile,' my voice cracking like Peter Brady's. I never saw Phil or Darrell laugh so hard. I never get tired of hearing this record from beginning to end. Not every band is as lucky to have a child musical genius such as Darrell to help invent a new form of metal."

"The hardest I ever headbang is when I am in the presence of Sleep. Some magical combination of riffs that speak to me, hair flying, mountains of Orange amps – the guitar tone sounding like something ancient in time… I don't know. I just know my neck is going to hurt bad the next day, and I will be happy about it. This record is it for me.

"I saw them on this tour at Jabberjaw – a tiny coffee shop that fits about 50 people at best. They had a projector showing planets moving so slowly you could not discern the fact until the end of the show: some had indeed moved an inch or two. Hypnotic. Perfect. The second time I saw them was at All Tomorrow's Parties up in the Poconos, curated by the savvy and badass Jim Jarmusch. My highlights were Iggy Pop live, Luc Sante discussing his book Low Life, meeting Jim Jarmusch and seeing Sleep. I headbanged so hard I almost fell off a balcony!"

"Another band we were lucky enough to tour with a lot. I never tired of watching their shows when we toured together, blown away nightly by their talent and creative riffs. Each member of the band was phenomenal, and I'm pretty sure the first time we toured together they were still teenagers. Just incredible. The record begins with a simple but ancient sounding riff, then the explosion of the band, and there you are, head banging for the next fifty minutes. They created a new sound and a new form of heavy that nobody else had done before. One of my favorite bands of all time."

In this article: white zombie