These Are The 10 Best OPETH Deep Cuts 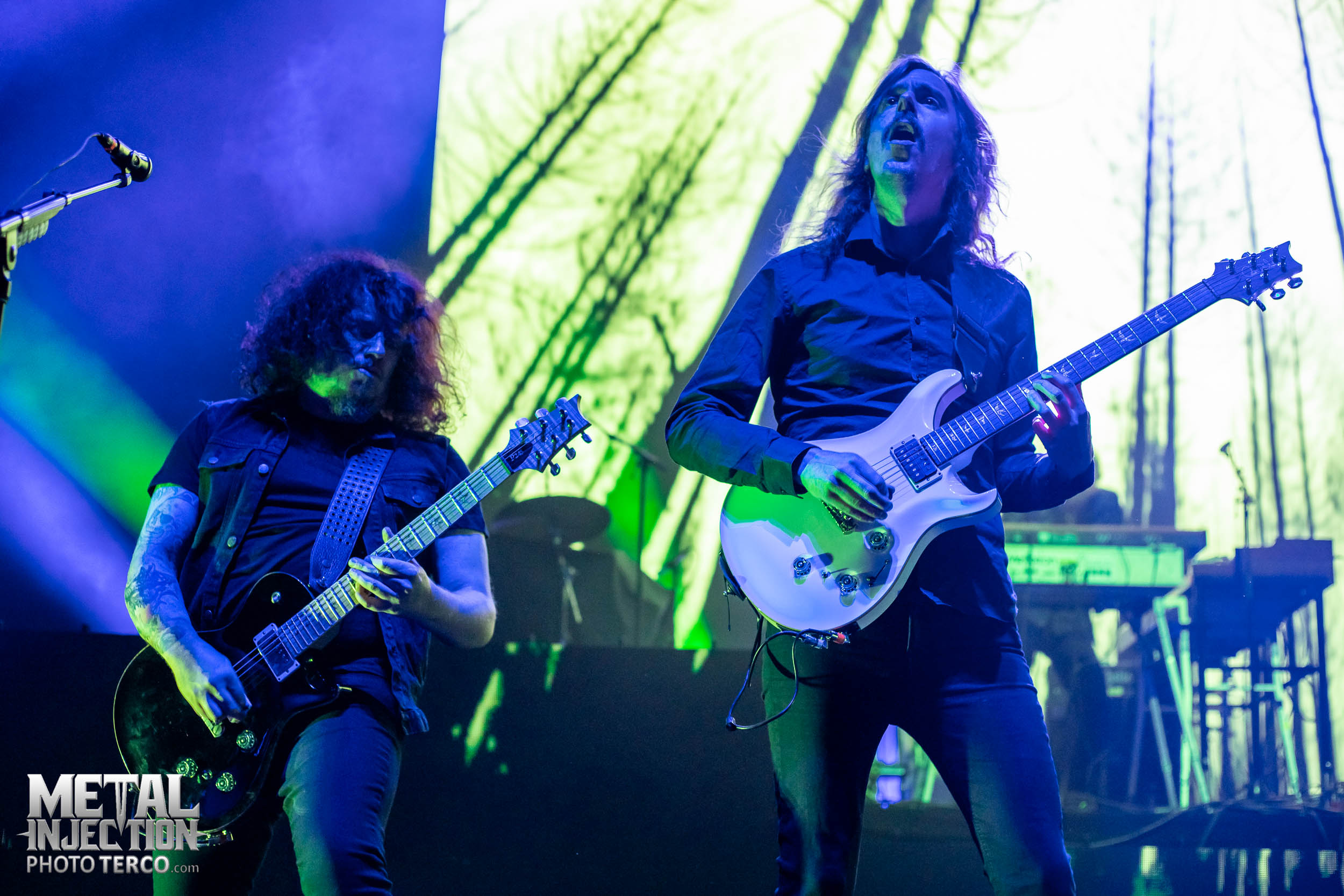 From one of the many metal acts sprouting from the fertile musical ground of Sweden in the early '90s, to arguably the biggest progressive rock band of this generation (and the last), Opeth's storied three decade-plus career has been as twisting and turning as their finest compositions. Frontman, guitarist and main-composer Mikael Åkerfeldt is undoubtedly the creative force behind the Stockholm crew, being as equally deft at conjuring up brutal roars and unsettling guitar riffs as he is singing soothing cleans and finger picking acoustic passages. With a lucky 13 studio albums under their belts, Opeth show no signs of stopping or slowing down.

Having famously (or perhaps infamously) re-tooled their style at their commercial peak, the five-piece have gained many new fans in the last 10 or so years, but also have seen a small percentage drop off; perhaps they're more content to re-listen to Blackwater Park for the 10,000th time instead of exploring Opeth's later albums. It leads to the band having a lot of deep cut material, not only from the usual sources like bonus tracks and obscure covers, but lesser known songs both old and new alike. So with that said, let's going hunting for Opeth's 10 best deep cuts…

"By The Pain I See In Others"

The closing track of arguably Opeth's heaviest album, the epic Deliverance, "By The Pain I See In Others" has become a bit of black sheep on the otherwise highly lauded release. Band main-man Mikael Åkerfeldt has never shied away from his dislike of the song – and while it's maybe not as mind-blowing as some of the material on the rest of the LP, even an above average Opeth tune is better than most other group's back catalogue. It bobs and weaves through multiple tempo, feel and key changes – with some dissonant riffing and melodic passages sitting side-by-side.

Plus the section that hits just past the three minute mark is just punishing. It took Opeth until the tail-end of 2016 to perform it live, and even then it only played four times as part of their special Evening of Sorcery: Damnation & Deliverance shows – so definitely a deep cut.

A track initially only released on a Decibel Magazine flexidisc, before making into the 'connoisseur edition' of Opeth's most recent LP In Cauda Venenum. "Cirkelns Riktning" is pretty rockin', packing a great loose yet driving groove, replete with '70s-style keyboards sitting comfortably on top of the mix. Not heavy, per-se, but a great uptempo song, and it features a smashing guitar solo from the super-underrated Fredrik Åkesson. Much like the bulk of the material from In Cauda Venenum, "Cirkelns Riktning" ('Width of a Circle" in English) does sound more impassioned and unique in their native Swedish tongue, as opposed the the English version. A great little bonus from Opeth's best album in years.

A very metal sounding track from the band, "Derelict Herds" is lifted from the deluxe edition of 2008's Watershed. As the final tune on the LP, "Derelict Herds" is technically the last death metal influenced number that Opeth have released at time of publication. It's an awesome piece of music, and one that could have easily worked it's way onto the album-proper. It packs lots of different elements into its six and a half minute runtime – off time chugging, mysterious verses, a tasteful slide guitar solo and a demonic middle section. Classic mid-era Opeth, and proof that the band could have continued with the more death metal leaning style, if they were so inclined. But, c'est la vie.

"Face In The Snow"

Another deluxe edition track, this time from 2011's fanbase-splitting Heritage. "Face In The Snow" fits right in the with the rest of the album, with the acoustic intro moving into a restrained full band performance. Bluesy licks swirl around the laid-back bass and drum grooves, with it's subdued instrumentation living plenty of room for Åkerfeldt's always strong clean vocals. Heritage as a whole certainly has its weaker moments, and "Face In The Snow" easily could have made it to 'standard edition' status in lieu of a few of it's track-mates. But instead it's cruelly relegated to the deluxe edition, and digitally it's not available on any of the major streaming services.

"Into The Frost Of Winter"

Possibly the earliest Opeth recording publicly available, "Into The Frost of Winter" is a rehearsal demo from way back in 1992 – some three years before the birth of their debut full length Orchid. The track only came to light when the album was re-released in 2000 by Century Black, by which time the band had incorporated elements of the song into "Advent," the opener for of '97s Morningrise. The quality is rough and raw (as you'd expect), however looking past the buzzing guitars and flat drums it is obvious that the band had a unique sound from basically day one – the death and black metal influence is certainly there, however the unpredictable arrangement and unique riffs immediately separate them from what was going on in Scandinavia in the early '90s. Opeth fans new and old would be advised to check out "Into The Frost of Winter" to see how it all began for group.

By the time 1998's My Arms, Your Hearse had come around, Opeth – temporarily reduced to trio – had began to really hone in on their own unique style and sound. My Arms… packs some of their all-time classic material, however we're going to focus on the second last track on the release, "Karma." Åkerfeldt's vocal range really gets to shine, and while the song structure is non-linear, it features some tremendous passages of music – the amazing melodic guitar-led middle section almost alone makes it worthy of inclusion. Interestingly it wasn't played live on the LPs subsequent tour, rather Opeth waited until 2009 before debuting "Karma".

A ten minute epic from the band's sophomore album Morningrise, "Nectar" has been somewhat forgotten by both Opeth and a vast majority of their fans. Having only been played once in this century – and that was right at the start in 2000 – the two tracks that follow it on the LP ("Black Rose Immortal" and "To Bid Your Farewell") seem to be the main talking points. While it must be said that "Nectar" may not be on the exact same level of excellence as those songs, it's still got some awesome elements – especially the acoustic to electric ending movement. Opeth were still to completely nail their sound at this point of their career, but "Nectar," and the whole of Morningrise, deserves a revisiting.

"Still Day Beneath The Sun"

A frankly beautiful number recorded around the time of the Blackwater Park sessions in 2001, "Still Day Beneath The Sun" might be Opeth's greatest non-album song to date. Apparently recorded mostly live in an apartment in Stockholm (save vocal harmony overdubs), it's based around delicate finger-picked acoustic guitar patterns and some of Åkerfeldt's softest vocals. It's hard to come by, both physically and digitally; "Still Day Beneath The Sun" was included in the deluxe 2CD reissue of Blackwater Park, as well as released as a 7" single – both of which are long out of print. Online it's much the same as the other material featured on deluxe editions – no official uploads to streaming services, just simply third-party YouTube links. It's a shame, as it's a truly magical piece of music.

Not a cover of the Cream song, rather the longest track on the 2016's Sorceress. The only tune on the LP to be co-penned by lead guitarist Fredrik Åkesson, it's nearly nine minutes of light and shade. Moving from the lengthy intro, built upon quiet, piano-led tension, before the guitar-heavy release kicks things into gear with scorching, yet tasteful, blues-rock leads. While it definitely has some of the "dad-rock" elements that some have derided the band for embracing (definitely a little bit of Jethro Tull creeping in there), Opeth have always been able to put their own twist on the classic sound and "Strange Brew" is a excellent example of this. An underrated later-day effort for sure.

A very cool and well performed cover featured on the deluxe edition of 2008's Watershed and as the B-Side to the "Wither" single, Opeth's tackling of Alice In Chains' "Would" is one of those great musical crossover's we didn't know we needed. The Swedes do a great take of this grunge classic, wisely keeping arrangement is basically the same, save a slightly extended guitar solo section. Åkerfeldt does a stellar job tackling both Jerry Cantrell and Layne Staley's vocals, while the rest of the band lockdown the song's famous dark, yet slinking groove. One great act covering another is always a beautiful thing!

So, how did we go? With mountains of recorded material to shift through we've definitely had to make a few tough calls and cut a few great lesser known Opeth gems. Let us know what deep cuts we missed below!