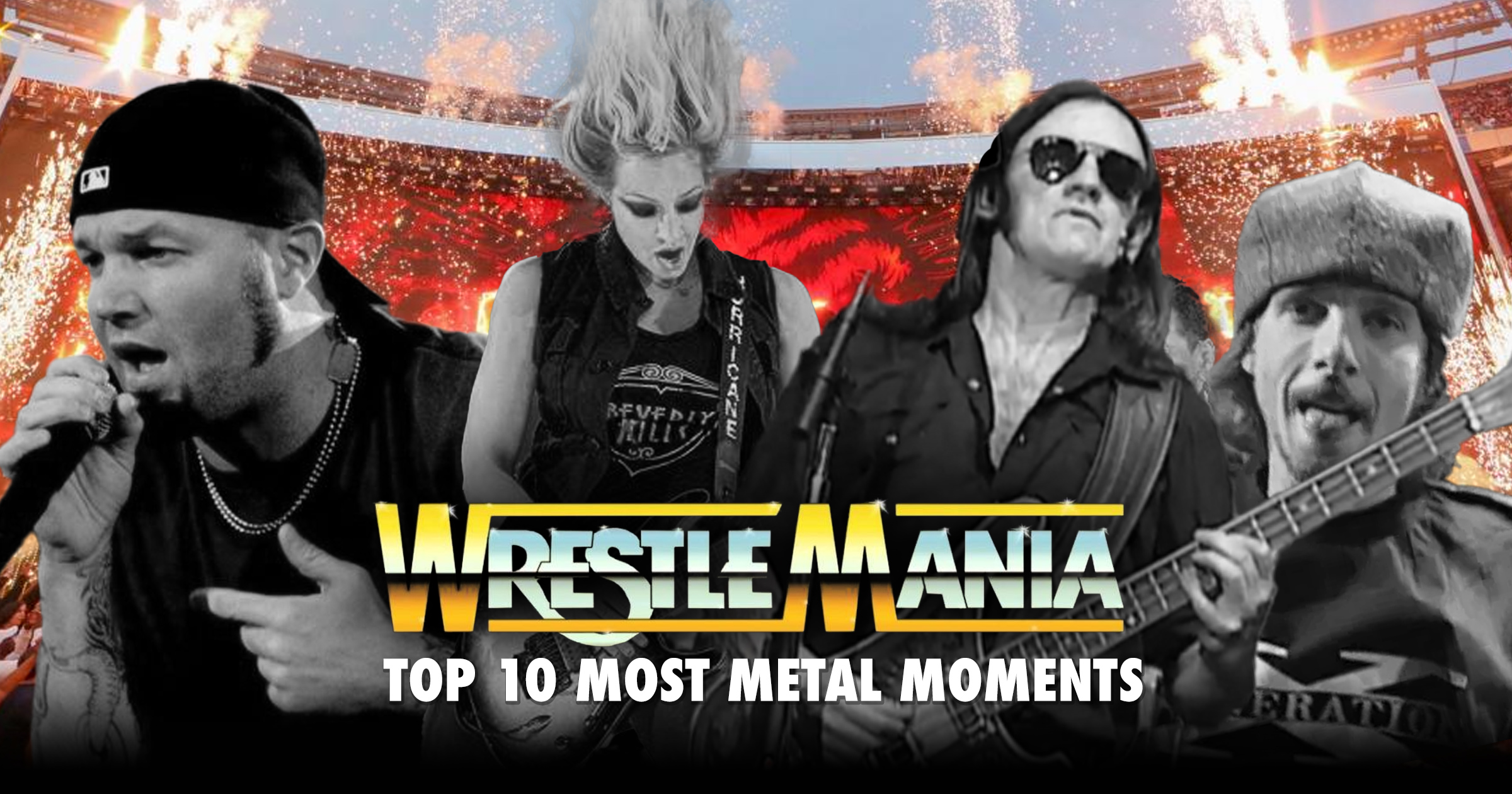 WWE WrestleMania, the showcase of the immortals, the grandest stage of them all is this weekend and we can't help but get a little nostalgic. In the 37 year history, there have been too many "WrestleMania moments" to count, from HBK achieving his boyhood dream, Daniel Bryan overcoming all the odds to become champion, to Kofi Mania, there have been plenty of memorable moments at the biggest WWE show of the year. But what about metal?

There are always grand performances, and heavy metal and wrestling obviously have a lot of crossover. After all, we have a whole podcast about it, where we just interviewed Rhea Ripley.

As I started to think back, I realized there has been a plethora of heavy metal performances at the Super Bowl of sports entertainment. In fact, 10 stand out in my mind.

Why not take a walk, or a mosh, down memory lane to find the top 10 metal moments in WrestleMania history.

Everybody remembers the now iconic Degeneration-X theme, and for WrestleMania 14, "The DX band" was formed, which featured WWE's in-house composer at the time, Jim Johnston, and vocalist Chris Warren, who was doing the best Zach de la Rocha from Rage Against the Machine impression going at the time. Somebody thought it would be a good idea to cover "America the Beautiful" in the style of the dX song, and as soon as the crowd figured out what's going on, they start booing. It's so bad that the footage has been scraped from any archives and is not available to view on WWE network. But here is an old rip.

P.O.D. are peripherally metal and at WrestleMania 22 in Rosemont, IL, they performed one of my all-time favorites, Rey Mysterio to the ring for what would be his crowning match, where Rey would win the World Heavyweight Title. I was rooting for Rey hard in the match but just felt there was no way WWE would ever give him the big gold belt. I was very happy to be proven wrong. Also, P.O.D. did a great job with the performance recreating the feel of Rey's theme live.

Randy Orton's entrance theme has become an iconic part of his persona, with the "voices in his head" telling him to do dastardly things. At WrestleMania 30, Rev Theory showed up to play him out for his main event match, where he would go on to lose the title to Daniel Bryan. For some reason, there is no official version of this performance outside of the WWE network. So here is a live bootleg.

This was a cool moment for me because I got to be there live for it. WWE doesn't typically spring for "actual" songs for wrestlers, but with Ronda Rousey, an exception can obviously be made. Ronda imported her entrance theme from the UFC for pro wrestling, and we can't think of a better fit for her. Hopefully, we'll see more Ronda in a WWE ring this year.

6. Drowning Pool plays Triple H to the ring at WrestleMania 18

Triple H is the only wrestler who will appear twice on this list, with two different bands playing him in. That's why the dude is the most metal. In 2001, WWF (at the time) put out WWF Forceable Entry, a compilation which featured remixes of wrestler entrances by known musicians. Drowning Pool were tasked with recreating the now iconic Motorhead version of the Triple H song, and then invited to the following WrestleMania to perform the track. Triple H would eventually go back to the Motorhead version of the song.

5. Saliva Play out the Dudleys at WrestleMania 18

That's right, WrestleMania 18 had both Drowning Pool and Saliva performing. It was a nu-metal dream. While Saliva are best known to the WWE universe for penning the super-infectious theme for Batista, did you know they also recorded a remixed Dudley entrance and performed it at this show.

4. Nita Strauss Plays Shinsuke Nakamura to the ring at WrestleMania 34

One of the coolest surprises of WrestleMania 34 was seeing Alice Cooper guitarist Nita Strauss show up unannounced at shred the hell out of Shinsuke Nakamura's memorable WWE theme song. We had a chance to talk to Nita about it for a recent interview, and she said it all came together very quickly at the last minute. She totally nailed it and created an iconic WrestleMania moment.

3. Limp Bizkit "Rollin'" with the Undertaker at WrestleMania 19

The Undertaker has had many different phases, but who remembers Taker's nu-metal phase? When he returned as "biker Taker" he came out to Kid Rock's "American Badass," which sampled Metallica's "Sad but True." Once that licensing deal ran out, Taker switched to "Rollin'," a far more appropriate song, seeing as though he would come out in a motorcycle. At WrestleMania 19, Limp Bizkit showed up to Seattle with their performance boots on and frontman Fred Durst even got in the ring. Sadly, Undertaker did NOT do the Rollin' dance with the Durstettes.

As a fan of both wrestling and music, and a huge Living Colour fan, it brought me great joy when CM Punk convinced WWE to license their iconic track to be his entrance theme. Naturally, by the time WrestleMania rolled around, Punk pitched having Living Colour play him out. WrestleMania 29 was in New Jersey, right across the bond from Living Colour's home base of New York City, so they were more than happy to oblige, and totally killed it.

Was there any doubt what would be number 1? Motorhead played out Triple H twice at WrestleMania (17 and 21), but I prefer their original performance. I have included both here and you can decide which works better for you.

That concludes our list. WrestleMania is this weekend on Peacock. Hear my predictions here.