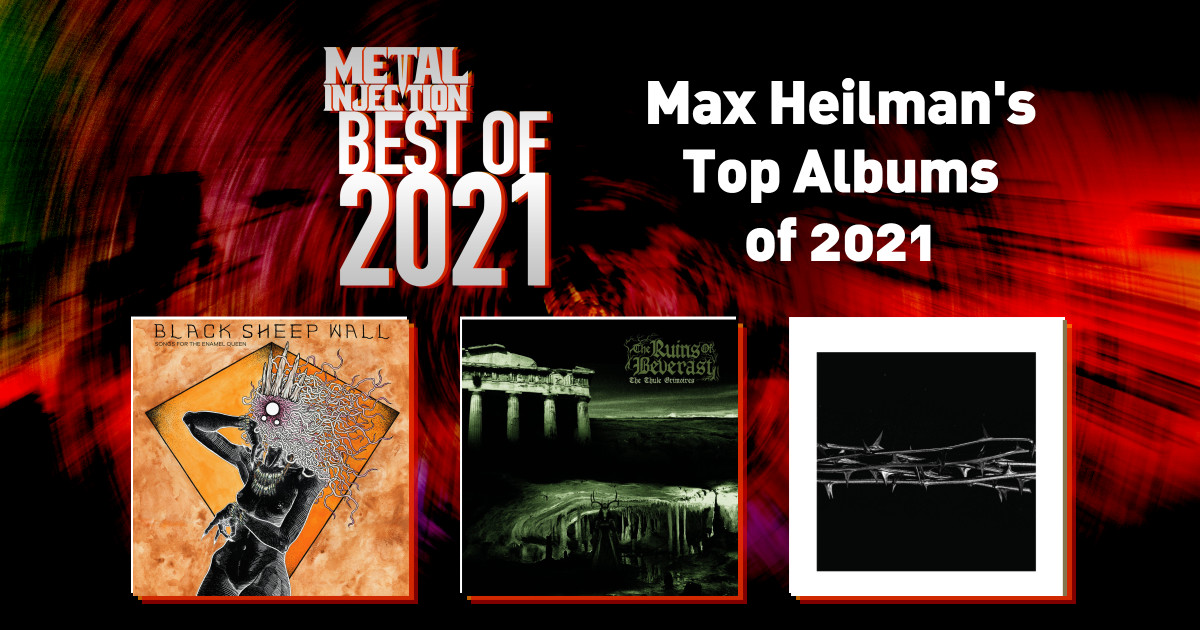 For all the insanity that was 2021, we did get some awesome music out of it. Once again, I'm totally overwhelmed by the prospect of choosing the albums that really took the cake for me. Full disclosure, my preferred styles of metal polarize between melodic atmosphere and progressive brutality, with a bit of accessibility to piss off the gatekeepers. My taste centers on liking what I like, when I like what I like.

So if you don't think there's enough trad metal in my list, you're barking up the wrong tree. However, I do want to shout of a few albums that didn't quite edge into my top 10 albums: Tribulation – Where the Gloom Becomes Sound (gothic metal), Ad Nauseam – Imperative Imperceptible Impulse (avant-garde death metal), Impure Wilhelmina – Antidote (progressive black metal/heavy alternative), Reverorum ib Malacht – Svag i Döden (Roman Catholic black metal), Mental Cruelty – A Hill to Die Upon (Blackened deathcore).

Amenra took a few leaps of faith with this album. Choosing to embody a more personal approach than they took on previous albums. Singing in their native language, pulling from live musical rituals and implementing female vocals rejuvenates this band's shamanistic doom metal. Their mastery of heavy music as a religious ritual remains entirely their own, but this time there's more scaffolding for an uninitiated listener to grab onto as they sink into the crushing ecstasy. By breaking their mold, Amenra have highlighted new facets of their tectonic devotions.

9. The Ruins Of Beverast – The Thule Grimoires

I know it's cliche to marvel at one-man black metal bands… but this thing sounds far too immense to be the brainchild of one person. Yet here it is, and it's arguably the best material from The Ruins Of Beverast. Its nexus of weighty doom metal and atmospheric black metal comes backed with bewitching melody and cavernous wickedness. The details really solidify this album's next-level execution, whether it's ambient soundscapes or knowing right when to break the tension with thunderous double-kick. It's far more nuanced than one-man black metal often amounts to.

To be clear, this is a seven-piece band, not Converge proper. Chelsea Wolfe and Stephen Brodsky of Cave In aren't just contributors to this album, but integral parts of a new faction within the world of Converge. Bloodmoon: I might have elements that recall the artists involved, but the intersection of styles can't be pinned down so simply. The way Wolfe's magical voice contrasts with the skronky chaos of Converge is compelling enough, but the way these songs push each musician outside of their comfort zones makes the album a pivotal juncture for everyone involved.

Yes, this isn't the same band that wrote "March the Fire Ants," but a less heavy Mastodon is absolutely still a good Mastodon. Their elite tier musicianship remains on full display as they cross-pollinate mesmerizing ballads with some of the most intense songs of their recent discography. The fact it's a double album allows both extremes to leave their mark on its extended run time. It's clear from this collection of songs that Mastodon considers themselves songwriters first, choosing to implement their chops in service of something the listener can easily hum to themselves. It might not be the heaviest, but I can't often say I've so easily recalled so many moments from a double album.

War might be a common theme in plenty of metal, but 1914 has essentially made their brand of extreme music into a heart-wrenching period piece from the World War I era. From the horrors of trench warfare to the psychological torment war leaves behind, this album comes packed with emotional grit and striking realism. It's not just the field recordings and aesthetics that make it stand out. These guys come through with an explosive combination of black, death and doom metal that would succeed regardless of its historical backdrop.

5. Harakiri For The Sky – Mære

If it works, you might as well release 90 minutes of it. Harakiri For The Sky hit their stride in recent years, and this sprawling effort shows how well their efforts have paid off. Unrelenting drums, sticky guitar leads, and emotive vocal howlings become a gift that keeps on giving for this thing. The band may have a fairly predictable formula, but the skill with which they deliver it is next to none in their scene. It's also nice to hear a post-black metal album that has a more punishing edge, considering how non-threatening most practitioners of the style have come to be in recent years.

It was worth the wait. Almost a decade after Melting Sun set the bar for dreamy post-metal into space, Lantlôs has returned with another substantial step in its artistic evolution. Their black metal leaning has never been farther away, but this album's most accessible moments find a pertinently aggressive foil. The fact some of this album could be compared to Foo Fighters, while others passages almost fall into post-hardcore territory speaks to the diversity it embraces. Don't worry, that glistening ambiance that made the previous album so indispensable hasn't been left behind. It just comes alongside a cavalcade of tasteful rhythm changes and progressive riff switches.

The intersection of black metal and deathcore isn't exactly new, but Humanity's Last Breath has become a shining example of pulling it off with creative depth. They call their style "evil," which basically means taking the most unsettling elements of black metal and injecting them into the heaviest down-tempo deathcore. The results are both unpredictable and foreboding, catchy and catastrophic. Most importantly, the band's music spans the gamut of their stylistic nexus. You'll get a melodic chorus here, a devastating breakdown there, and a frenzied wall of sound the next… all the while cultivating a formidable sonic signature.

These sludgecore luminaries came back with a bang. Black Sheep Wall knew better than to attempt to one-up their older material in terms of sheer heaviness, so they attempted to diversify it with a broader dynamic range and a handful of sonic curveballs. The secret to this album's success comes from the fact the album doesn't really sound less heavy because there's a trumpet interlude or an extended meditative groove. The album wears its aching heart on its sleeve, large due to the maniacally despondent vocals. Few bands can maintain such a potent nucleus of raw emotion while exploring the outer reaches of a low-end apocalypse.

There's something supremely special about a veteran band topping themselves long after what many consider their golden years. The Crimson Corridor is a perfect encapsulation of everything that makes Zao an enduring bastion of awesome heavy music. It might not be the band's darkest album, or their most anthemic, but it contains some of their most thoughtful arrangements to date. Whether meticulously atmospheric, or devastatingly aggressive, the band's chemistry remains both memorable and complex. Said complexity manages not to hinder the band's foundational appeal; Dan's iconic lyrics, a punishing rhythm section and riffs, riffs and more riffs.