Back in the Day Drama 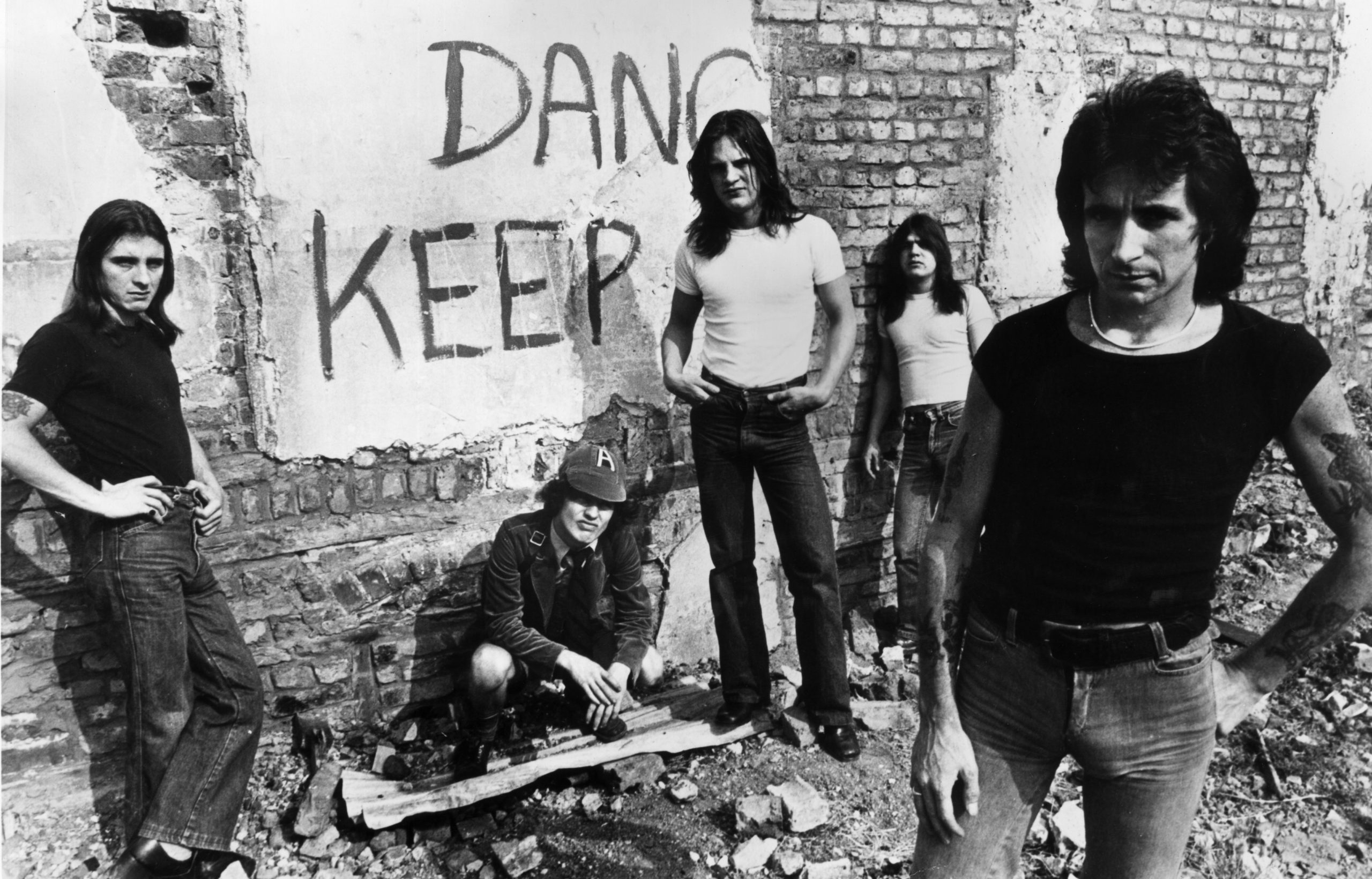 "Members of Australian punk rock group AC/DC must decide if they are strippers or musicians. Until they do, the station will not associate with them in any way." — Garvis Rutherford, the General Manager of Australian radio station 2SM in 1977 on cutting ties with AC/DC due to their lurid performances. Founded by Catholic Archbishop Michael Kelly in 1931, 2SM was owned by the Catholic Church.

In 1976, when AC/DC was touring the UK and Europe, members were met by hordes of teenage girls. The police and vice squad who were hell-bent on protecting young female fans of the band from the band. Rumors swirled about girls getting Bon Scott tattoos in backyards–something not terribly hard to believe given how obsessed women were with Bon in the UK and, quite frankly, everywhere he went. While in Glasgow and Liverpool Angus was told he would be arrested if he broke into his striptease act and dropped his shorts. When they returned to Australia, AC/DC continued to enrage the morality police with their racy performances. A common warning by the police was if Angus pulled down his pants, they would "pull the plug" on the show. In December of 1976, AC/DC's social calendar was full with around twenty shows around Australia. With the help of Aussie newspapers, government officials, angry parents and more, things got rough for the band after being deemed an "obscene" act full of "disgusting" overt displays of sexuality. Of course, having the largest radio station in Australia during the 70s and 80s vowing to not play your jams because your lead guitarist, while dressed as a schoolboy, enjoyed peeling off his clothes and exposing himself during live shows was not good news for AC/DC. Things would get so out of control that the boys actually considered leaving Australia for good.

The books Highway to Hell: The Life and Death of AC/DC Legend Bon Scott and AC/DC: The World's Heaviest Rock both detail some of the shit the band had to go through to play shows. Occasionally, this included the omission of an appearance by Angus' behind to avoid further criticism or attempts to stop their live shows. Let's look at what AC/DC was up against in 1976, just for being AC/DC.

On the minor side of things, the band got into trouble after a woman who had the misfortune of having the same phone number that Bon utters in "Dirty Deeds Done Dirt Cheap," 36-24-36, was plagued by prank calls from fans that hoped it was the band's real phone number. But, like they say, there's no such thing as bad publicity, and this got the band just that. As the tour rolled through Australia, disdain for the group's live performances grew, as did the band's image of being nothing more than escaped sex maniacs with guitars posing a threat to Australia's core morality. Their show at the Myer Music Bowl in Melbourne was described as just "another hysterical riot."

When they arrived to play their third show of the tour in Albury City Hall in New South Wales, their tour program's sale was banned when it was found to contain a quote by Bon Scott dropping an F-bomb. Apparently, Albury's town clerk had received a flood of calls from angry parents who found Bon's description of the song "Ain't No Fun Waiting Around to Be a Millionaire" offensive. Here's Bon trying to explain his way into a corner while name dropping a certain blonde bombshell:

"It means it takes a long time to make enough money to be able to fuck Britt Ekland."

The flustered clerk, who identified himself as a "professional artist," issued a statement to AC/DC. He warned them that if they wanted to play Albury again (and who doesn't?), they would "have to change their act." Adding that he had an open mind and all but was worried about how this kind of entertainment would affect the children. Ah, the "THINK OF THE CHILDREN" adage never gets old, does it?

Jumping ahead a bit, let's talk about AC/DC's show at Tamworth Town Hall, a gig that had been previously mythologized as the time AC/DC hid in their dressing room after a mob (including police officers) led by the Mayor, showed up with shotguns to stop the show already in progress. As fantastic as that sounds, this AC/DC drama was somewhat debunked by the Deputy Mayor at the time, Tony Stannard, in 2020. But that doesn't mean Tamworth didn't make it hard for AC/DC and other bands to play there. According to Stannard, bands were required to cough up a $500 bond to play Tamworth Town Hall, which would be forfeited if the band in question did anything "inappropriate" during the show. AC/DC tried to get around this by approaching another location, the Workers Club. Unfortunately, the cops had gotten to the club owners first, who informed them that they would yank their license if they allowed AC/DC to play. So, AC/DC played the Town Hall without incident or perceived indecency. It seems that the problem wasn't so much with Angus getting naked or Bon's hypnotic crotch and oozing sex appeal. It had more to do with the perpetuation of the notion that the band was "obscene" by members of the government and news agencies overhyping this aspect of AC/DC's appeal.

Let's move on to a show that has been the subject of AC/DC folklore in the past, the December 17h show at Toowoomba Harristown High School, the first show following the allegation the band had been driven out of Tamworth like Frankenstein's Monster.

The show at Toowoomba, like the show at Tamworth, went off without a hitch. However, following the show, Garvis Rutherford of 2SM would release his statement vowing to not play AC/DC on the radio because of Angus' nightly striptease. And, let's not forget the children, especially the underage girls attending these riffy smut fests, and how it corrupted their young minds by preoccupying their brains with sex. Which brings me to a fan letter to AC/DC from a girl who saw the Toowoomba show and got all the feels. Here it is in all its hormones in overdriven honesty:

If you are in Toowoomba again I'll be the one who jumps up on the stage and goes for Malcolm instead of like last time when I just yelled out and got a wink.

Next time I'll get more than a wink.

I came across this love note on the back cover of a 1976 AC/DC bootleg, which in a postscript notes the girl's name was left off of the letter so she wouldn't be embarrassed and that the band got messages like this all the time from female fans. The things I do for you! At any rate, the final straw in this obscene odyssey was the cancellation of an AC/DC show in the coastal town of Warrnambool, citing the cause as fear of a "civil disturbance." The book AC/DC: The World's Heaviest Rock documented a news story that ran shortly after the Warrnambool show's cancellation with a quote from Angus Young threatening to leave Australia and go play where they were appreciated. Here's Angus!:

"It's no good if we drive halfway across the country to stage a concert to find out that someone has canceled it because they consider us obscene. It will only take a couple more hassles for the authorities, and we will leave Australia."

What actually ended up happening is two-fold. First, AC/DC would not play a show in Australia again until 1981. And they would never play Australia again with Bon Scott after his death in February of 1980. So in a way, Angus' declaration AC/DC would leave Australia came true as the Bon Scott configuration of the band was sadly no more. As I don't want to end this post with a case of the sads, here's footage of AC/DC doing a spunky version of "Dirty Deeds Done Dirt Cheap" in Melbourne at the beginning of their tour in Australia on December 5th, 1976.