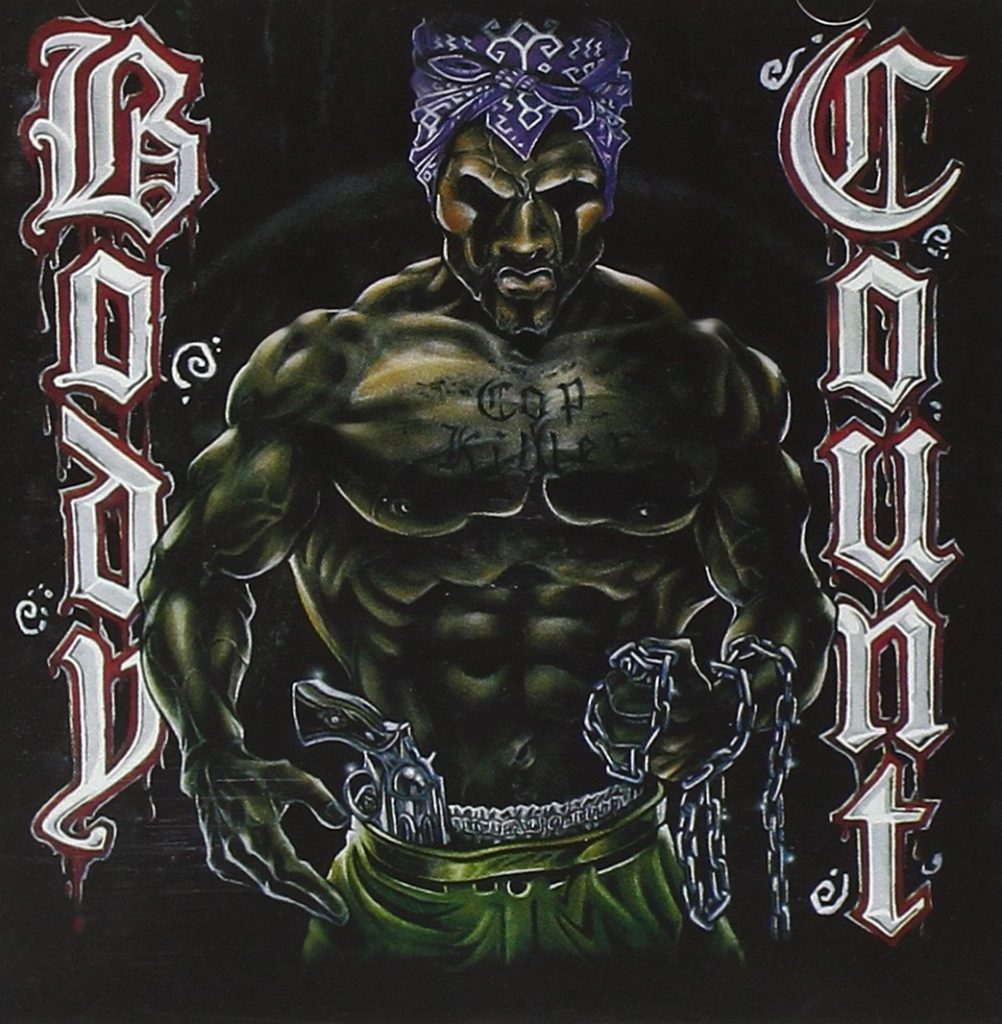 Bringing the issue of police brutality to mainstream media in the wake of the 1992 LA riots, Body Count’s Cop Killer was a provocative and uncompromising release that tested the limitations of the First Amendment. Los Angeles artist Dave Halili shares his thoughts on his iconic cover work and the controversy surrounding the bands debut release.

As member of the Universal Zulu Nation and the original L.A based Rhyme $yndicate, Halili has been deeply rooted within the hip hop family tree for nearly 30 years. Looking back at how the seeds were planted by becoming cool with Ice T, Halili explains “I was a fan of Iceberg [Ice T]  from the ‘6 in the morn’ track , ‘Colors’  & when ‘Pusher Man (I’m your Pusher)’ came out I started working with him.  My good friend Vicki Calhoun from high school was working as a session singer for commercials & many big celebs like Eddie Murphy, Eddie Vedder/Pearl Jam, Fishbone but most notably she sang on many Red Hot Chili Peppers songs. Vicki & her bro K.C showed Ice’s manager Jorge and Afrika Islam (Ice’s composer/co-producer) of the Universal Zulu Nation my graffiti & posters. I assume they were impressed as I was invited back to discuss business.  My first meeting with Ice was both an adrenaline rush & a nervously exciting experience because I’d been collecting his 12″ singles and seen him in Breakin’ movies."

With a hip hop icon interested in his product, Halili was quick on the draw and established himself as Ice T’s  graphical go to guy. “Early on I remember designing logos with Ice & Islam for Rhyme $yndicate & Zulu Nation simultaneously. Immediately after I was involved in the fan club designing merch and the catalogs, Ice also invited me to be in the ‘High Rollers’ video". With Ice T becoming a popular figurehead in African American culture and the relationship between Police and socio economically deprived minorities within Los Angeles at breaking point, the perfect storm of internal and external forces was slowly brewing and Halili stepped up  to capture lightning in the bottle with his reality driven depiction of white America’s worst nightmare.

Painted to draw controversy, the Cop Killer piece was a  mixture of street influenced art and activism. Looking back at the artworks foundations, Halili explains  “it was an Ice & Halili collaboration 100%. Warner Bros art department had absolutely nothing to do with the concepts or design elements. The reason I bring this up is to highlight the fact that Ice’s visions are solely organic and uncontaminated.  We wanted a symbol of an anti hero/vigilante – a defender against authoritative abuses of power. The Cop Killer nightmare image is a synthesis of inner city angst, a Frankenstein of Tookie Williams [the founder the infamous Crips gang] mixed with Black Panther core practices and other sinister motifs."

He continues, “we had a few think tank sessions at Ice’s $yndicate War Room where we worked on sketches and compositional variations. The band was in such an early phase that I didn’t get to fully evaluate or develop the entire conceptual/reflection of Body Count.  It was still too early to fully create a comprehensive mirror of the project. I had been privy to witness the early Body Count underground rehearsals and the debut live gig at a historical yet exclusive LA restaurant/bar. So, with what Ice & I had discussed in closed door meetings I was allowed to develop a fantasy simulacrum to represent the Body Count vision & scheme: Shocking , heinous, appalling, fearful, offensive, repulsive, burning, slick, truth, beautiful darkness or whatever synonyms you want to add was what we were committed to…”. What was left was the blueprint to a miscreant monster, ready to be artfully architected by Halili’s dapper hands.

Filtered through his rich artistic voice, Halili’s use of materials and techniques ensured the Body Count cover and internal booklet artwork would contain the same controversial and politicised fury that was evident in their music. Digging deep into his creative process, Halili explains “there were 3 – 4  different black and white graphite sketch compositions submitted to Ice-T , Ernie C & band in the early phase of album image concepts.  I had only a few days to complete the final (worked with little or no sleep in my old Brea Art-Lab ). For its construction, Halili lays it out, step by step: 1 – Underdrawing with non-photo blue color pencils. 2 – Gouache, various colored pencils, acrylic paints  3- Hi pigment oils for high-lights, enhancing color values and depth. 4 – Iwata airbrush & enamel graffiti pens. The Body Count old english hand-painted lettering & cop killer gangsta are actually on the same 30″ X 40″ tall. While the painting has a comic book style approach to it, the symbolism is powerful and confrontational.

If as Ice T states, “you took a kid and you put him in jail with a microphone and asked him how he feels, you’d get Body Count” then Halili’s work is the visual depiction of this scenario if this same kid is released upon society after years behind bars. In a 1997 interview with Metal Hammer, Ice reflects “he’s what we figured was the fear of America: some guy right out of the joint, a gang member with a gun and ‘Cop Killer’ written on his chest”. The choice of the blue doo rag was a no brainer considering the Tookie reference, plus Ernie and Ice’s affiliation with the 74 Hoover Crips.

The entire narrative of the piece is wrapped up in the body and face of the figure,  highlighting a balanced approach to positive and negative space and light source. Halili is also aware of how gesture, expressive marks and shadow can all communicate volumes to the viewer. Relating to the old belief that the eyes are the window to the soul, Halili wanted to elicit the perception that the streets and social constructs have conditioned this character to feel cold, empty and emotionless – perfectly conveyed in the blackness covering his eyes. Inked across his chest in a villainess dread, the ‘Cop Killer’ text was unapologetic and quick to draw the eye – and the ire of the media.

Used as a political chess piece and scapegoat in the aftermath of the 1992 L.A riots, both Body Count and Halili’s artwork would become the sacrificial lamb, led out to slaughter by several powerful factions within the media. “When the Cop Killer controversy hit critical mass I had witnessed my cover painting on network television being exhibited like a piece of evidence from a crime scene by the hand of then USA Vice-Prez  Dan Quayle” reflects Halili.“Even Charlton Heston held my artwork on TV. I was around 22-23 years young at that time."

“I felt as if I were part of a Delta Force unit on these mini-missions” reflects Halili . “The Rhyme $yndicate was taking out objectives & setting up HQ bases in new, various locales.  I believe the first indication that Cop Killer was starting to sizzle was what I had sensed at Ice’s Hollywood HQ where we had our war-room meetings. Ice T was getting an extraordinary amount of activity from faxes , phone calls/ management, the R$R coordinators etc. about resistance to the content in the debut album from law enforcement agencies & organizations. So the $yndicate Bullet-Train was travelling at full throttle with more tight turns. All this going on while Ice was planning tours and doing gigs like Lollapalooza with Body Count & the MC Ice T outfit. During this period I was creating tour merch, designing posters, stage layouts, CD/LP single covers, working with Europe & Japan for opening R$ retail shops”. But with intense political and commercial pressure being applied to the label (over 1000 stores across America had already pulled the album), in July 1992, Ice T and Time Warner decided to remove ‘Cop Killer’ from Body Count’s album and re-release the album.

As well as taking an axe to Body Count’s tracklisting, Warner Brothers also did a hatchet job on Halili’s cover art. “Warner Bros Records electronically removed my  ‘hand drawn’ cop killer tattoo (on the chest of the Body Count killer ) and replaced it with a shameful, unconvincing Body Count computer typeface. I was never called by the art department  to submit a variation or a hand-produced alteration. This was a case of corporate censorship by Time Warner – their overseers, legal department and pressure from protesters, shareholders, entities etc."

Despite the scorn from America’s corporate conglomerates, Halili’s work was viewed by civil libertarians, musicians and critics alike as not only an exceptional piece of art, but also an important stepping stone in regards to the ideas of freedom of speech and protection of the first amendment. “At first I received glowing praises for creating a stunning image and materializing a complete packet of illustrations, graphics & lettering which would end up being the entire Body Count album set (front – back cover and lettering/promo images , merch – et alia )” explains Halili. Ice admired the Cop Killer image that I painted so much that he had displayed in his Hollywood HQ a mini -sculpture of the Cop Killer that was hand-made from a well known model master."

Unfortunately, controversy continued to follow the creative partnership between Ice and Halili, with Ice T’s  next hip hop release Home Invasion (cover art by Halili) again drawing scorn from Time Warner. Featuring a white child enthralled by black culture, oblivious to his parents seemingly being attacked by black home invaders – Halili’s work lead to Sire/Warner Bros. refusing to release the album with its current artwork. Tired of having his artistic integrity questioned, Ice T left the label and formed his own label Rhyme $yndicate on Priority Records and released the album unaltered.

Nearly 30 years later, looking back on his legacy, Halili astutely explains “those years from Cop Killer to Home Invasion were very surreal yet voltaic times for me personally. On a grander scale , whenever the cover was displayed in the media or when I was interviewed/questioned about the meaning/message behind the image, the subject of authoritative misuse and abuse of power was being addressed or at least pondered.  GB Shaw put forth “all great truths begin as blasphemies”.  The fact that when truth appears, there will be asinine mongrels that will bark like abused dogs to impair the logic of others. Needless to say there were some negative reactions by a couple morons & ignorant meat-heads I encountered who obviously did not research the actual social issue brought forth in the Body Count record and the depth of the message(s) layered inside.  The mindless fools criticized the leader (Ice) and anyone associated with the project based on bigotry, media hype and emotional insecurities."