Back in the Day Feuds

Reliving The Old-School Rivalry Between IRON MAIDEN and JUDAS PRIEST – "We're Gonna Blow Their Bollocks Off!" 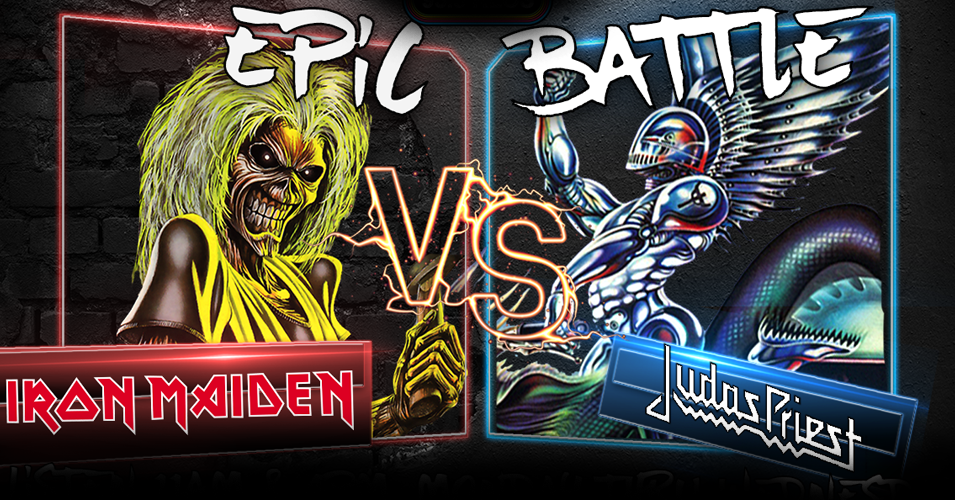 The quote in the title of this post is attributed to former Iron Maiden vocalist Paul Di'Anno. In K.K. Downing's book Heavy Duty: Days and Nights in Judas Priest K.K. recalls hearing the quote while JP was wrapping up recording British Steel at Beatle drummer Ringo Starr's tiny in-home studio in Tuttenhurst Park. While on a break, K.K. was reading through an unnamed music magazine when he came across an interview with Iron Maiden, where Di'Anno's "blow their bollocks off" quote was used regarding his expectations for their upcoming tour. After reading Di'Anno's brag, K.K. immediately went straight to fuck this shit mode and felt JP should replace them. Here's K.K's reaction to Di'Anno's comments:

"Who the fuck are this lot? I'm just there thinking there are so many bands that would be grateful for the tour. Why should we give it to these bands if that's their attitude? But that's a big statement to make. And it didn't happen, that's for sure! It didn't happen, it just created an atmosphere."

The rest of the band disagreed and 40 years ago this past April, Iron Maiden and Judas Priest met up in the U.K. to start the tour.

Maiden had released their visceral self-titled debut, and it instantly changed the trajectory of heavy metal. They had even cultivated their own style, much like Judas Priest, only instead of studs and black leather, members of Maiden opted for spandex, high top sneakers, and leather jackets–a look dubbed the "cunt's kit" by members of future Maiden vocalist Bruce Dickinson band Sampson. And then there is Judas Priest–visually and musically the very personification of metal. And, never a band to be outdone, Judas Priest's sixth album, British Steel (which had yet to be released at the start of the tour), received heavy, heavy metal praise. But tensions still existed between both bands as well as Maiden's inner circle. By this time, Di'Anno had become kind of unreliable. A sore throat one day (Steve Harris once replaced Di'Anno on vocals due to this malady), maybe singing in a vastly different style from out of nowhere another day, all while subscribing to the classic rock star trifecta of sex, booze, and drugs 24/7. One night Judas Priest was ripping through cuts from British Steel, before one of their shows. In his book, K.K. recalls while looking out into an empty auditorium, he saw a small group of people sitting, watching, and, more importantly, listening to them perform. He asked his guitar tech (likely Daniel R. Johnson) who the interlopers were and when he found out it was Iron Maiden, he told his tech to tell them to "fuck off." Additionally, according to former Maiden guitarist Dennis Stratton, Downing believed Maiden showed up to "spy" on Priest. Here's more from K.K., who might have been wearing a tin hat at the time:

"I think they (Iron Maiden) had a quest to unsettle us and overthrow us."

Di'Anno continued to talk smack about Maiden's prowess over Priest, and you'd think that perhaps this would have been the first and last time the groups would tour together. Nope. Judas Priest would once again call on Maiden to support them for the last legs of their U.S. tours in 1981 and 1982. Now led by Bruce Dickinson, Bruce felt Maiden was being mistreated, specifically as it pertained to their expansive stage setup. K.K. referred to the "demands" as "physically impossible" as the venues they were booked to play in would simply not accommodate the more extensive set design. During their time on the road in '81 and '82 Downing remembers the fuckery continued, culminating in some sort of "confrontation" which was not detailed. Jumping to the year 2000, Rob Halford would recruit Bruce Dickinson to supply additional lead vocals for the curiously titled track "The One You Love to Hate" on Halford's record Resurrection. There's even footage of the two metal titans recording their vocals together in the studio at the same time, as well as footage of a live performance in London that same year along with Rob, Bruce, and Geoff Tate. Things seemed harmonious between Priest and Maiden. Flash-forward fourteen years to 2014 when Bruce Bruce (Dickinson's nickname during his Samson days) took issue with the Metal God's use of, gasp teleprompters! Here's Dickinson from his interview with The Guardian on Halford using autocue (or teleprompters) during live shows:

What's silly about this is Dickinson's example. Of all of Priest's lyrics, Halford isn't going to forget this metal mantra. Anyway, the always affable Halford was quick to respond to Dickinson's taunting in true Metal God style:

"What we British say is it was just a storm in a teacup. I love Bruce. I love Bruce. He's a great friend of mine, and he's very outspoken. [He's a] great frontman, a great singer from a great band. And, you know, these things are said in many ways, and I'm sure he didn't mean it in any other way than Bruce sometimes goes off on one of his rants. You know, it's just the way it goes. I wish I was like my mate Bruce Dickinson and could do everything, but I need that safety blanket. But yes, storm in a teacup, storm in a metal teacup."

In May of 2019, when we could still go see live gigs, Judas Priest bassist Ian Hill made a case for Priest and Maiden to team up again before "some of us die." A sentiment Rob Halford agreed with. Any issue K.K. had with Di'Anno (who has since apologized to Downing), and Maiden has long been forgiven and he credits them for having the "balls" to know "what they wanted to do." No word on when or if Dickinson ever apologized to Halford for taking a broad swipe at him for using teleprompters–an insult he's also leveraged at the historically, lyrically challenged Ozzy Osbourne. At any rate, when we can finally, safely return to seeing live shows, I hope it's a six-hour double bill with Judas Priest and Iron Maiden, complete with a proper heavy metal parking lot pre-func. For now, let's take a look at some footage and hear audio of both Maiden and Priest live in 1980, shall we? Yes, we fucking shall.

Audio of Judas Priest live in Paris recorded at The Bataclan on April 25th, 1980.