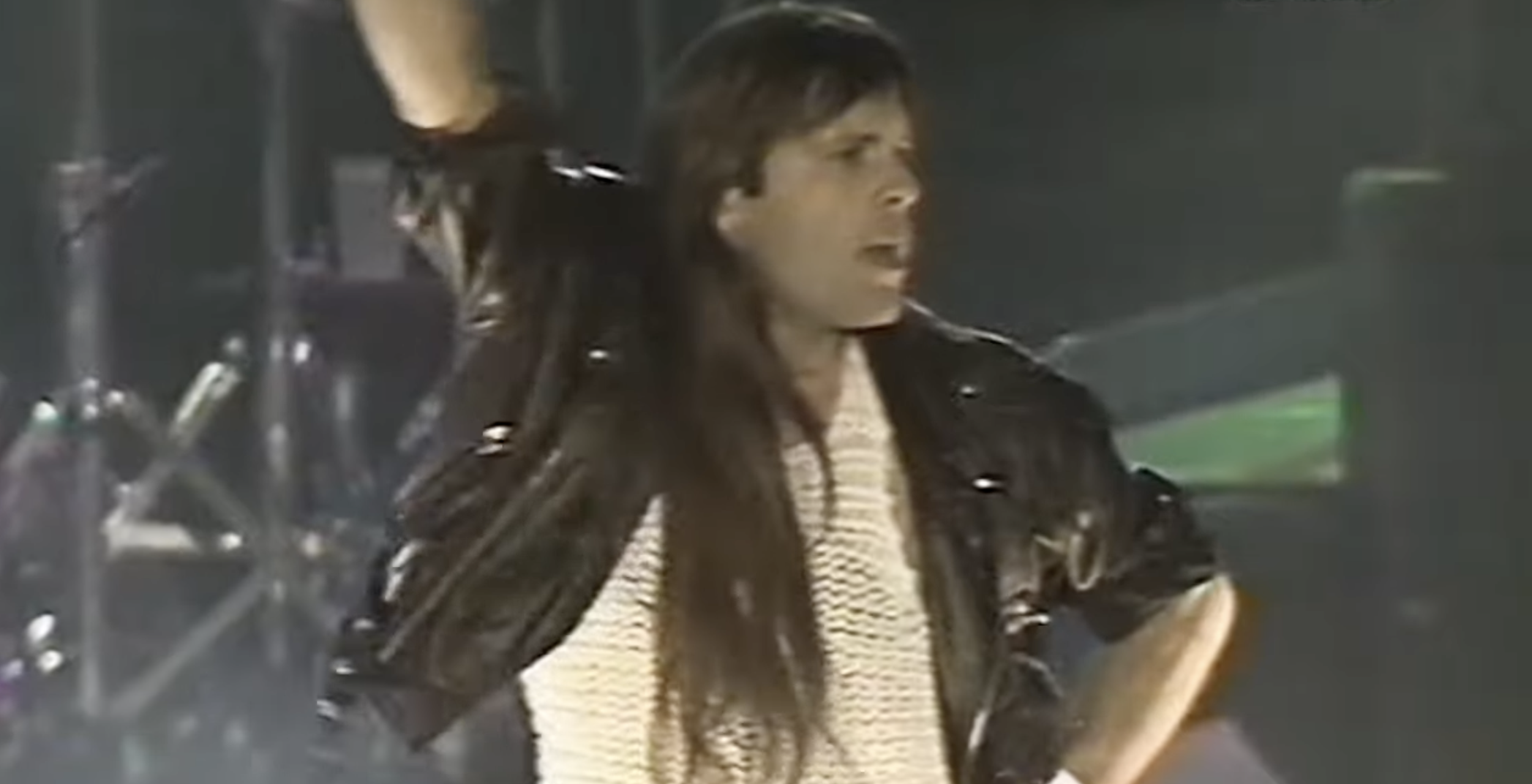 "There's no part of being a person now where some bad stuff isn't going to happen to you eventually. And the record, well, there's not a lot of 'cheerio aren't things wonderful' kind of cheery stuff on it." said Iron Maiden vocalist Bruce Dickinson sharing his thoughts on the state of the world in 1992 with VJ John Norris on 'Hangin' With MTV,' and how it influenced the band's ninth album, Fear Of The Dark.

As we mark the 30th anniversary of Iron Maiden's album, Fear Of The Dark (released on this day in 1992), given how things are currently going, it's relatable to hear Bruce Dickinson talking about how "bad" things were back in 1991 while Maiden was recording their ninth album. George H. W. Bush was president and Clarence Thomas was appointed to the Supreme Court. Operation Desert Storm and Gulf War were happening, and the footage of Rodney King having the shit beat out of him by LA cops created outrage around the world. Serial Killer Jeffery Dahmer was arrested after the discovery of eleven corpses in his home and his subsequent trial would dominate the news cycles through 1992. Magic Johnson revealed he was HIV positive in November. Then, on November 30th, Queen vocalist Freddie Mercury would pass away at the age of 45, less than 24 hours after he announced he had AIDS. And things didn't exactly get much better when 1992 rolled around. So considering all that was going on in the world in 1991, it's not hard to imagine how all of this collective madness might influence the musical output of musicians and other creative minds at the time. Still, while out promoting the album, Bruce expressed optimism about where Maiden was headed in an interview in June of 1992:

"Iron Maiden are now focusing on the future. We don't look back anymore, we don't compare what we're doing now with what we've done in the past. It's really a new beginning for the band."

And many fans would agree with Bruce here as it pertains to Fear Of The Dark being a "new beginning" for Iron Maiden. Though the record contains all the required elements of an Iron Maiden record, (Bruce at his snarly best, wicked riffs, and thought-provoking lyrics), there was, undeniably, something different about Fear Of The Dark. And perhaps some of it was reflective of not only the current state of the world but also the current state of Iron Maiden as a band. Though the first track, "Be Quick or Be Dead" is textbook, face-melting Maiden, the record itself is decidedly dark, especially lyrically. The somber themes in Fear Of The Dark is something that Dickinson often eluded to when speaking about the album, as he did in his 2017 autobiography, What Does This Button Do? One such track is "Wasting Love." Lyrically the song revolves around a promiscuous man who, in Bruce's words, was "going to bed with people he didn't necessarily love" and the implication of promiscuity (and lack of protection during sex) being a fairly life-threatening activity in the 90s. It's safe to say he wasn't alone in this feeling after a decade of witnessing HIV and AIDS take the lives of over 100,000 between 1981 and 1992. Another track that fits in the grim theme is "Fear is the Key," a song Bruce was writing when he learned of the death of Freddie Mercury. Though Dickinson has said "Fear is the Key" wasn't solely written with Mercury in mind, he did pen a line in the song that was directly inspired by Mercury's incredibly sad and untimely death:

"Nobody cares until somebody famous dies."

As we're talking about the lyrics on Fear Of The Dark, Maiden's principal songwriter, bassist Steve Harris, didn't write the majority of the material for the album as he had done in the past. In fact, according to Harris, the only member of Maiden that didn't contribute lyrics to Fear Of The Dark was drummer Nicko McBrain. Here's more from Harris on how he felt about not writing pretty much all of Iron Maiden's lyrics for a change:

"I think it's really great getting a load of help from others. I mean on the first two albums I wrote nearly all of the material and it was the same for the next two records. I've always been prolific I suppose but really, that stuff put me under a lot of pressure and it's really nice to have all the others contributing a load of stuff that's really good. It's meant the pressure has relaxed a little and I've been able to concentrate on a few other things too like a bit of production."

And focus on the production of Fear Of The Dark is just what Harris did, producing his first Iron Maiden record since the group's formation. The tracks on  Fear Of The Dark chug along at respectful speeds, as it pertains to the standard heavy metal BPM of 134. For the most part. When they don't, it feels a bit like you might have started listening to another Iron Maiden record entirely. Another change for Iron Maiden with Fear Of The Dark was choosing to work with London-based artist Melvyn Grant instead of their long-time collaborator, Derek Riggs. Grant's painting of Eddie on the cover of Fear Of The Dark depicts the Iron Maiden mascot as a sinister half-tree/half-demon, fulfilling the group's desire to present Eddie as a more "threatening" version of his former self. A tough assignment, considering Eddie is pretty fucking threatening all the damn time. He's gone toe-to-hoof with the devil with his ax in hand on the cover of Run To The Hills (1982), and as the ghoul who decapitated former Maiden vocalist Paul Di'Anno on the cover of Maiden Japan (1981), for example.

Overall, Fear Of The Dark was pretty well-received by fans. It would also top the UK Album Charts and sold nearly a half-million copies in North America. Much of the record was recorded at Harris' home studio in his former Essex Estate in England. Does this mean Harris was able to maintain a tighter grip on his vision for Iron Maiden? Probably not. Though in an interview with Raw Magazine in 1992, Harris did have a lot to say about the stability of personal dynamics within Maiden. Which, in retrospect, now sounds as if Harris perhaps had a feeling big changes for Iron Maiden were right around the corner:

"Since Nicko joined in 1983, we've [Iron Maiden] been very stable. If someone left now, it would be a big blow, but if we felt that the spirit was still there we'd carry on. When Adrian (guitarist Adrian Smith) left (in 1990) we were aware something might be wrong. Some people tend to question Bruce simply because he's doing all these other things and they're all wondering whether he's going to leave. It's got nothing to do with that at all. He writes books on tour while the rest of us are sleeping or watching TV. He just gets involved in things. I'd like to think that if he felt any different about the Maiden thing, he'd tell us. In fact, I know he would."

Dickinson had, of course, taken his passion for writing to the next level by authoring two books by the time Fear Of The Dark was released; Adventures of Lord Iffy Boatrace (1990), and The Missionary Position, which was released two days before Fear Of The Dark. He also released his first solo record, 1990's Tattooed Millionaire, which came to be after he recorded a song for the fifth A Nightmare on Elm Street Film, The Dream Child, 1989's "Bring Your Daughter…to the Slaughter." So yeah, Bruce was busy and was becoming progressively more disenchanted with Iron Maiden. Even though he has called Fear Of The Dark the "best" Iron Maiden album ever, adding that his vocals sounded "even better" than they did on Piece of Mind (1983). And let's not forget Dickinson's quote earlier in this retrospective–his assertion Iron Maiden had finally begun focusing on the "future" and "new beginnings" together.

For Dickinson, the words "new beginnings" would quickly translate to his departure from Iron Maiden, which Bruce announced prior to the band's Real Live tour in 1993. He would participate in the Real Live Tour due to his contractual obligation to the band, but he wasn't happy about it and the experience isn't remembered fondly by the members of Maiden. The bottom line with Fear Of The Dark is this – it marks an important transitional moment in the band's vast existence. From the dire topics it bluntly addresses, to its refusal to be dismissed when compared to Iron Maiden's past catalog, Fear Of The Dark holds its own, on its own. Is it accurate to say Fear Of The Dark is a bit erratic? Yes. But it's not without some high points, of which fans will remind you at live shows, when Maiden plays material from it. If you've seen Maiden before, you may have been a part of a sing/chant-along to the album's killer closer and title track, "Fear of the Dark." So as we conclude this look back at Fear Of The Dark, let's see and hear the reaction the song got from the crowd lucky enough to be in attendance at Iron Maiden's performance at Rock in Rio in 2001.