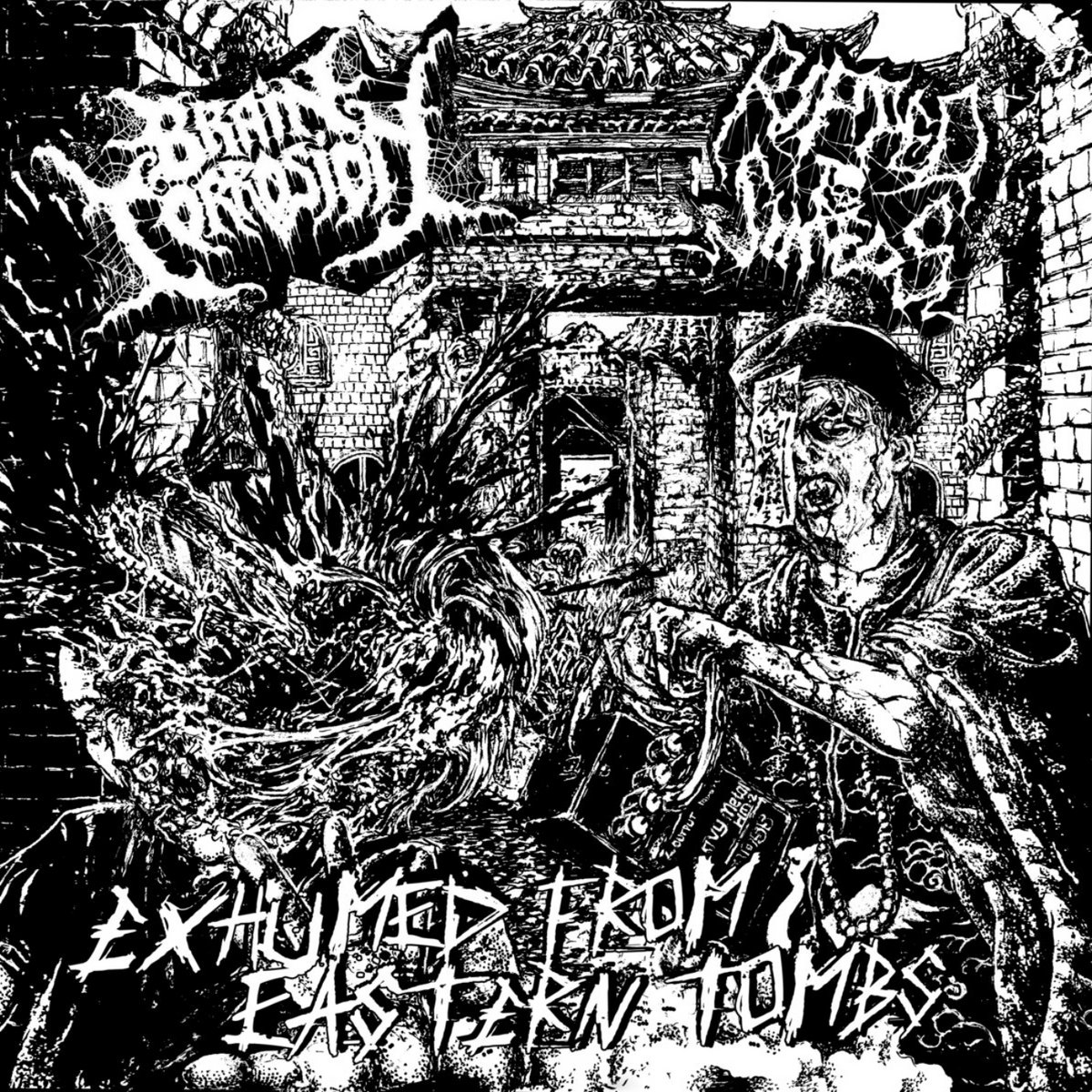 It’s Monday and Mondays suck, so let’s grind it out with Brain Corrosion and Ripped to Shreds split Exhumed From Eastern Tombs.

No Christmas music this week unless having your eardrums torn apart like a gift wrap is Christmas to you. And if that is the case, welcome, you are in the right place. This was one I meant to cover during the Halloween season, but life happens. Better late than never. Plus, now more than ever everyone needs a little grind for the holidays.

First up is death-grinders Brain Corrosion out of Taipei, Taiwan. The three-piece started back in 2007 but have only released a handful of splits, demos, and EPs in their thirteen-year existence. Bands they have worked with include Altar of Giallo and the mighty Sete Star Sept. On the other end, we have chainsaw death unit Ripped To Shreds, which plenty of you may be familiar with by now. Ripped to Shreds live members from both San Jose, CA in the U.S., and Taipei, but spearheaded by sole studio member/writer Andrew Lee.

Brain Corrosion starts us off filthy as hell. Over eight tracks this band drags the listener without remorse. “Corpse Refining – To Become a Jiangshi (煉屍)” is a disgusting slice of grindcore laced with plenty of death metal influence. The band’s sound tends to lean more grind but they have no issue laying down some death on the regular. This first track is a perfect introduction to their sound, actually. There is a Mortician and Regurgitated feeling going on with their sound. These tracks are relentless.

When “Land of Four Shades, Surroundings Collapse (四陰之地 破敗之局)” gets going, Brain Corrosion sounds like the best of death metal bands going full steam ahead. Then the switch gets flipped and the band unleashes even more brutality with “Raped By An Angel.” A short track, but one that blasts like a sidewinder missile. It is pure grind with some groove woven in and some cackling laughter like out of some 80s horror flick to go with it. Every one of these tracks is a banger start to finish.

Ripped To Shreds hit us with four tracks of chainsaw tearing fervor. Three of these are covers, but if you have heard this band before, you know there is nothing to worry about. “Rotting Stenches Unknown” gets things started with that old school death metal sound that the band is known for. The guitars wail and the track is starts out thrashy. It even sounds like it might end up being a thrash track, but things twist, and it goes pure blazing death metal.  Brendan Sloan (Convulsing) does a guest spot guitar solo. The track is brutal. Punching out four minutes of total death fury.

The remaining tracks are covers of songs from Asocial, Assück, and Gridlink. The first is Asocial’s “Samhallet’s Offer” featuring a guest vocal appearance by Brandon Corsair (ex-Skullsmasher, Draghkar, Azath, and more). The track is just a minute of punked out grindcore that flies like a damn banshee. It’s fast and old school. “Sterility” by Assück is the next to get some love. An even shorter track than the last, it is possibly the most brutal one on in this collection though. Deathgrind chaos that cuts like sheet metal. An essential song and essential band. Closing things off is Gridlink’s “Dodonpachi.” Takafumi Matsubara has one of the most distinct guitar styles in grind, if not the most distinct.  But, it’s handled here pretty goddamn well. The frantic, sometimes disjointed shred is tech-y and hits like the battering ram it is.

This split is fantastic. Two flavors of death that come together perfectly. Both pretty old school sounding, one a little more raw, one a little more refined. Both bands knocked it out of the park with this one. If you did not know about Brain Corrosion or Ripped To Shreds, it is time you did. Get grinding on this!

This band is so heavy.