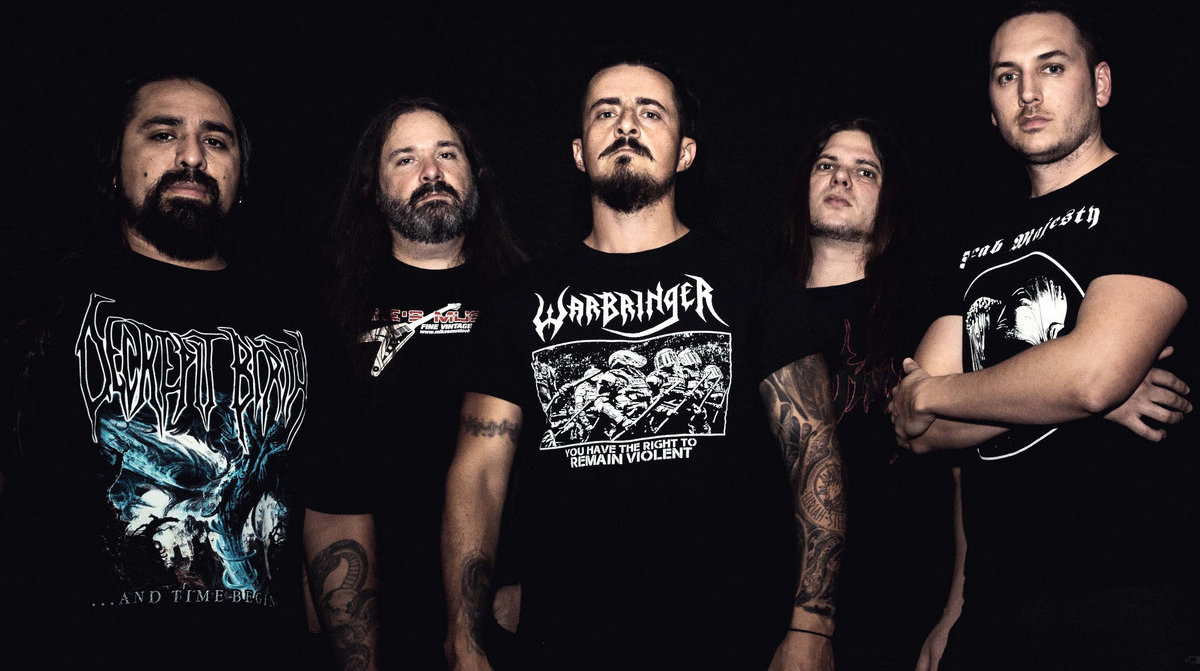 A few months ago in July, we helped Austin, TX brutal minded tech-death outfit Martyred launch "Iniquitous Transformation". Now today we're helping the band again, with an extra early full album stream of The Relegation ahead of its release next week on October 20 via Time to Kill Records.

Hearing is believing, and The Relegation is a royal feast of prime death metal that will delight old heads and younger fans alike. As for what the release sounds like, I'd say The Relegation will appeal most of all to fans of Suffocation, older Deeds of Flesh, and Cannibal Corpse. There are of course additional band-cited influences woven into the music ranging from Immolation, Vader, and Deicide-inspired ideas. Consisting of eight murderous cuts that add up to just under 32 minutes total, The Relegation has no filler to trim and is filled to the brim with killer material from start to finish.

The band had a lot to share with us for this album stream premiere. Martyred guitarist Mike DeBord says, "The Relegation is something that we’ve been working on for roughly the last couple of years. With this being our first full-length album following two previously self-released EPs, Exemplifying Their Defeat and Dawn of Terror, we wanted to make sure that this effort stayed true to the Martyred recipe, but also allowed us to showcase the evolution of the band as well. During the time between the last release and working on this one, we were able to harness our individual darker times & experiences and translate them into this in the most honest and brutal way we could as a band. We believe that’s what we have done with The Relegation.

"I think the addition of guitarist Jason Frankhouser's writing on this album will be the most noticeable difference. He wrote two songs, I wrote two, and we co-wrote the others. I think his writing style gelled really well with mine, and he has been a great fit. He wrote solos on the Dawn of Terror EP, but this is the first with rhythm contributions, and it’s worked out quite well. On a personal level, he is a hard-working dude touring as FOH sound for Bob Dylan and others. I would also like to say bringing on Rene Martinez on drums has brought a lot of power to the sound. Rene is an extremely driven guy who worked his tail off on this. He dedicated a lot of time as we all did, but he was determined to push himself to the limit on this. Metal is in Rene’s blood and he lives to play and be active as he has in his other Bands, Stabbing & Flesh Hoarder. I think the combination of our all styles and different backgrounds has made it what it is, and I'm excited for people to hear it."

You can check out Martyred's The Relegation in full below. The Relegation is a bloody good time offered at the offal altar of death that many of you will love. If you like what you're hearing, pre-orders can be placed here. You can follow the group on the Martyred Facebook Page.