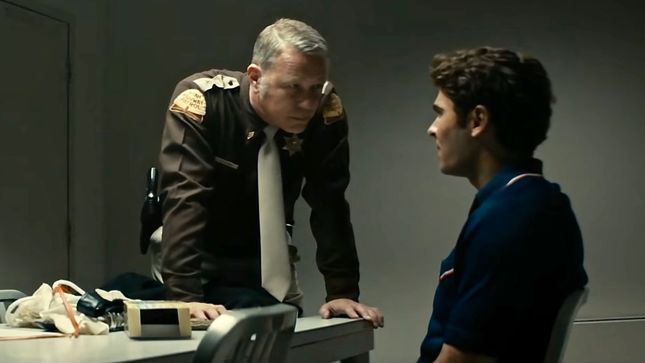 As we've been reporting, James Hetfield makes his acting debut in the Ted Bundy biopic Extremely Wicked, Shockingly Evil, and Vile, starring Zac Efron as Ted Bundy. The first trailer was released last January, and the second was released a few weeks ago. The movie also features Lily Collins, Kaya Scodelario, John Malkovich, Haley Joel Osment, and Jim Parsons. The movie was created by Some Kind of Monster co-director Joe Berlinger. It will be released in theaters and on Netflix this Friday, May 3rd.

Hetfield plays the Utah highway patrolman who first arrested Ted Bundy in 1975. While promoting the movie, Zac Efron was a guest on Jimmy Kimmel Live and was asked about collaborating with the Metallica frontman.

Efron says "He comes on the set, and it's one of the more pivotal moments. It's the moment that Ted actually got caught for the first time — he ran a stop sign. And James Hetfield plays the policeman that picks him up."

"And James Hetfield, to his credit, he absolutely nailed the part, he just crushed it. It's like he’s been acting his whole life. He had no fear. He did a great job. I was ready to maybe give James Hetfield [an acting] tip, but he didn't ask for a single one. James Hetfield is the shit!"

At this point, Kimmel quipped that he never knew that Ted Bundy was arrested by Metallica. Efron continued his praise of Hetfield saying:

You can see the exchange in the clip below.